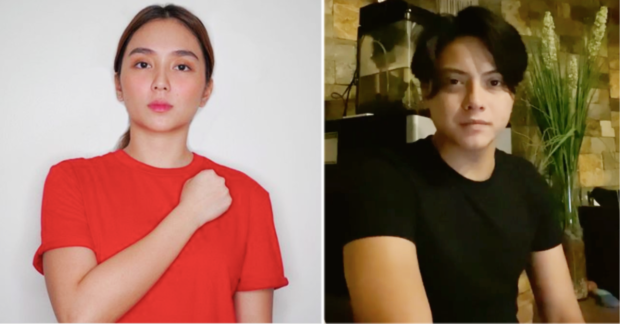 Kathryn Bernardo and Daniel Padilla have broken their silence on the ABS-CBN shutdown. Image: Instagram/@bernardokath, @supremo_dp

Kathryn Bernardo broke her silence on the issue of the ABS-CBN shutdown yesterday, May 13, over a week after the media giant went off-air on May 5.

Actor Daniel Padilla, meanwhile, stood up for stars who have protested the shutdown and expressed concern at the criticism they have received.

Their individual statements, captured on video, were each delivered on Instagram yesterday afternoon. The House of Representatives approved on second reading a bill granting ABS-CBN a provisional franchise to operate until October 2020 last night.

Bernardo explained that it took her time to speak up because she was afraid, citing that the last time she used her voice for politics, it was a “traumatic” experience as she and her family, she said, were attacked for it.

She and Padilla campaigned for Mar Roxas in the presidential elections.

(But now, I am here because I feel it is needed. I feel that even if there is no certainty that this will be heard, at least I did something. I feel that I need to be the voice of others.)

(Let us not worsen inequality. [To have a] choice should not just be for those with money.)

Bernardo also emphasized that the fight to keep ABS-CBN operating was not just because it was their second home.

(This is a labor issue because several thousands of employees lost their jobs even if they did not violate any law. This is an issue of public health because a source of information to protect themselves was lost. Lastly, this is an issue of press freedom because they lost a way to express their voice.)

She also urged Filipinos and the youth to speak up for what is right.

(I hope we Filipinos will learn to stand for what is right. I hope we’ll use our voices to responsibly express our thoughts.)

(To the youth, I hope you don’t become scared. Because you are like me, I got scared. But if we don’t speak up, who will? We will inherit the Philippines, which is why we have a right.)

Padilla addressed detractors of celebrities who have been vocal about opposing the ABS-CBN shutdown.

(What is wrong with standing up for your own livelihood and that of many? To all those criticizing those who speak up, I know we have differences in opinion. But I hope we do not forget to respect what others are going through.)

(Before I am an actor, I am a person and Filipino first. That is why I hope you do not deny our right to express our thoughts.)

He appealed to the National Telecommunications Commission—which issued the cease-and-desist order to ABS-CBN—to think of the good of many rather than the interests of a few.

Padilla concluded with a call for compassion and to recognize the truth.