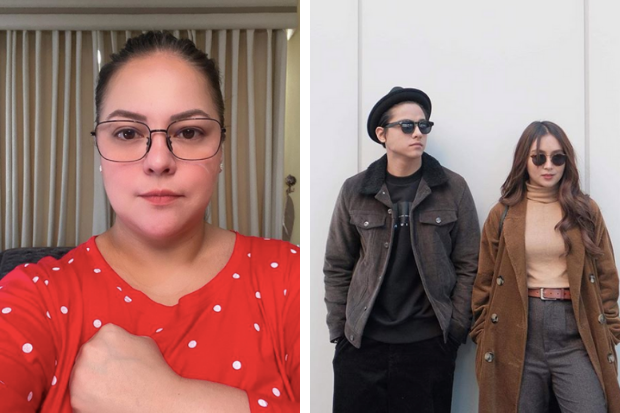 Actress and celebrity mom Karla Estrada rushed to the defense of her son Daniel Padilla and his love team partner and girlfriend Kathryn Bernardo, after the couple drew mixed reactions for breaking their silence over the ABS-CBN shutdown issue.

While some sympathize with them especially regarding jobs lost due to the shutdown, a few said that celebrities like them should simply stay silent and deal with the matter internally with the company.

Estrada stressed that the two have the right to speak up and should be respected, not just as artists, but as Filipinos.

(They are two of my most beloved people in the whole world. As their mother, I will do everything to protect them. To make sure that they are happy and that they will have a bright future.)

She added that she feels Padilla and Bernardo both deserve it, as they are both hard workers who are helping their families as best as they can.

Estrada’s message came with a photo of the couple with the text: “In a society where people are easily bashed and criticized, much like what they experienced during 2016 elections, Kathryn and Daniel chose to speak up and let their voices be heard.”

(If they want to speak up about what is happening in our society, let us respect them. Even if not as celebrities, but as our fellow Filipinos.)

(There are lots of uncertainties. But all I want to say is that now, more than ever, we should be united. Let us fight the crisis as one. Let us help each other so we can overcome this crisis and somehow ensure that our children will have brighter futures.)

Under the “#LabanKapamilya” and “#MassTesting” banners, Bernardo in her Instagram video yesterday stressed that she hopes to be the voice of the unheard ABS-CBN employees.

(Many of you think we have more stable lives than others. That is true, but it does not end there. We have more responsibility to help others.)

She also urged her followers to inform others and help them distinguish facts from propaganda, especially amid the ABS-CBN shutdown issue.

Padilla likewise showed his support for his home network while lamenting the current situation of the country, amid the shutdown issue and the COVID-19 pandemic.

(As Filipinos, it is our duty to be vigilant. It is our right to speak up. But what comes with that right is responsibility — the responsibility to ensure  that what we say is right and most especially, humane and for the good of the people.)

The couple, along with Estrada and many other celebrities, have been clamoring for ABS-CBN to be allowed to resume its operations following the National Telecommunications Commission’s order to shut them down.

The lower chamber of Congress yesterday approved on second reading House Bill No. 6732 or “An Act Granting the ABS-CBN Corporation A Franchise to Construct, Install, Operate and Maintain Radio and Television Broadcasting Stations in the Philippines, and For Other Purposes” which would grant the company an interim franchise to operate until Oct. 31. JB