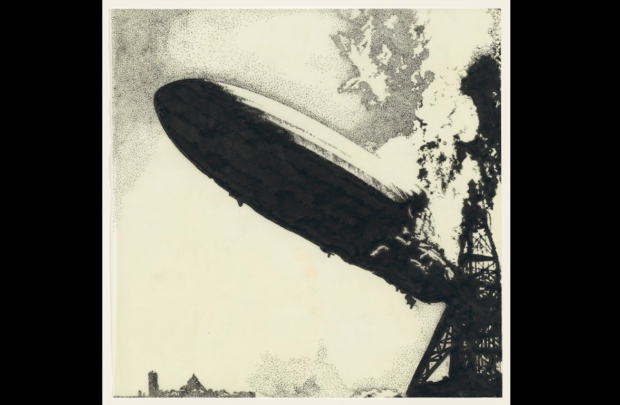 The album cover of Led Zeppelin’s eponymous debut album is expected to fetch up to $30,000 at Christie’s. Image: courtesy of Christie’s via AFP Relaxnews

The Led Zeppelin album cover will be on offer as part of Christie’s “The Open Book: Fine Travel, Americana, Literature and History in Print and Manuscript sale,” which will take place online from June 2 through 18.

The cover art for Led Zeppelin’s self-titled debut album features a black-and-white photograph of the burning Hindenburg airship, which was photographed by Sam Shere in May 1937.

The artwork was created by British graphic designer and illustrator George Hardie in 1969, when he was still a graduate student at the Royal College of Art.

Hardie created the cover illustration for “Led Zeppelin” by rendering the photograph in ink using a rapidograph pen to avoid potential copyright issues, with the band paying him $60 (P3,000) for the work.

“The idea of it was to use the impact of this but use it in a graphic interpretation. The fact is that it was the right thing to do because it’s really an iconic image plus it’s Led Zeppelin’s first album so it’s really good to go in there, not quite like a lead balloon, but like a streaming rocket… It’s a dramatic incident, it’s a dramatic album, it’s a dramatic statement,” Page said of the album cover to Time magazine in 2016.

The original illustration for “Led Zeppelin,” once listed among Time‘s 100 most influential images of all time, will now go under the hammer at Christie’s with an estimate between $20,000 and $30,000 (P1 million to P1.5 million).

“The historical significance of this album cover cannot be understated. It marked a major turning point in the history of pop music, heralded by the debut of Led Zeppelin… And the image has endured in a way that most other album covers have not; it very much has taken on a life of its own,” Peter Klarnet, senior specialist, books & manuscripts for Christie’s, said in a statement.

Aside from the cover illustration of Led Zeppelin’s eponymous debut, Christie’s will also auction the first dated printing of “The Star-Spangled Banner”.

This newspaper printing of what would become the national anthem was published in the Baltimore Patriot and Evening Advertiser on September 20, 1814, under its original title, “The Defence of Fort M’Henry”.

This rare printing includes all four original verses of “The Star-Spangled Banner”, which were completed by Francis Scott Key only three days before being printed in the Baltimore Patriot and Evening Advertiser.

The issue is estimated to sell for between $300,000 and $500,000 (P15 million to P25 million), with proceeds from the sale going to the American Antiquarian Society to benefit their collections acquisitions fund. JB