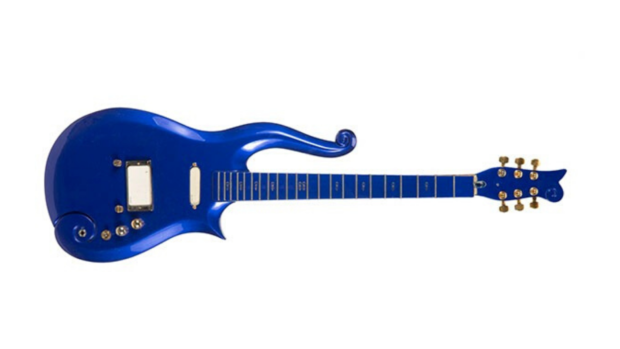 More than 700 memorabilia and artifacts from various musicians will be offered during the Julien’s Auctions annual “Music Icons” event, which is scheduled for June 19 to 20 in Beverly Hills and online.

Among the most coveted items is a blue electric “Cloud” guitar adorned with Prince’s love symbols on the neck and gold hardware, custom made for the late musician in 1984.

The instrument made an appearance in the 1984 film “Purple Rain”, in which Prince made his acting debut by playing the semi-autobiographical character of The Kid.

According to Prince’s estate, the superstar first came across the model for the Cloud while browsing in a guitar shop with his childhood friend and first bassist, André Cymone, in the late 1970s.

While the instrument on offer no longer has strings, it is accompanied by a Calzone purple guitar road case and a printout from Paisley Park of the list of Cloud guitars made for Prince.

The iconic guitar is now expected to sell for between $100,000 and $200,000, with Julien’s Auctions describing it as “one of the most important guitars from the early years of Prince’s career ever to come to auction.”

The manuscript was written in 1968 by Paul McCartney on a sheet of “Apple Corps Limited, 3 Savile Row”-headed stationery, providing insight into the multiple stages of development of the Beatles song.

“Julien’s Auctions is proud to present these important artifacts, all of which occupy an unparalleled place in music history and pop culture,” Darren Julien, president and CEO of the auction house, said of the forthcoming “Music Icons” sale in a statement.

Highlights of the auction are scheduled to be exhibited from June 15 through 19 at Julien’s Auctions’ galleries in Beverly Hills, California, although it is still uncertain whether lockdown restrictions will be eased in the state by then. RGA

2 Prince albums to be reissued