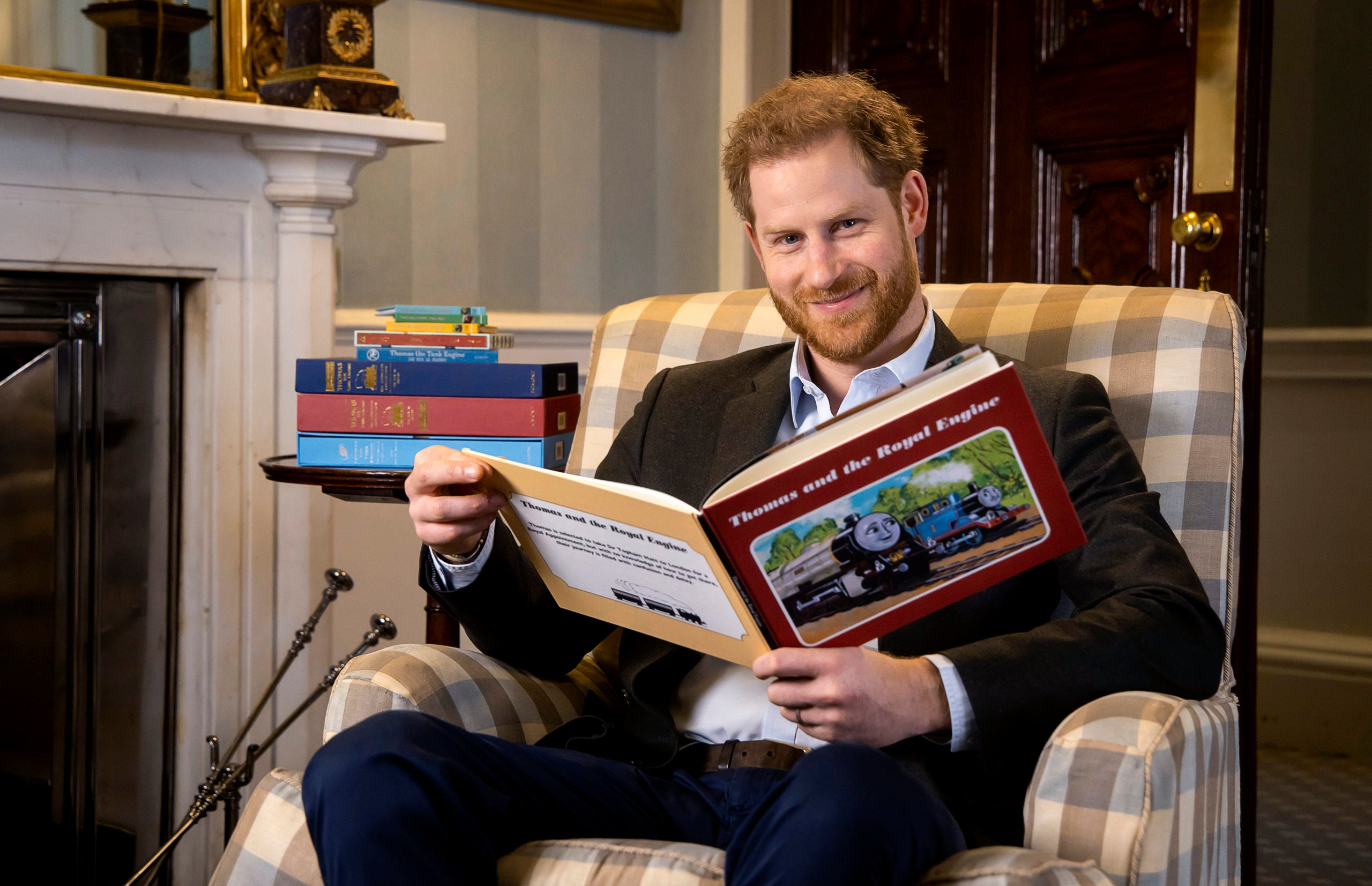 In this January 2020, photo and made available on Monday, April 27, 2020, by Mattel, Britain’s Prince Harry poses for a photo during the recording of his introduction to the new animated special ‘Thomas & Friends: The Royal Engine’. Set when Prince Harry’s father, Prince Charles was a boy, Thomas has to take Sir Topham Hatt, the controller of the railway, to Buckingham Palace to receive an honor. The special will be screened in the US on Netflix on May 1, 2020, and in the UK on Channel 5 Milkshake at 9:05 am on May 2, 2020. (Dave Poultney/Mattel via AP)

LONDON — Prince Harry has recorded a special message to celebrate the 75th anniversary of children’s favorite Thomas the Tank Engine.

The Duke of Sussex has introduced a new program called “Thomas and Friends: The Royal Engine,” which has a storyline that includes Harry’s father and grandmother, Prince Charles and Queen Elizabeth II, as animated characters.

Set when the Prince of Wales was a boy, the story sees the friendly engine taking Sir Topham Hatt, the controller of the railway, to Buckingham Palace to receive an honor.

In his introduction — which was recorded in January before his move overseas — Prince Harry is seen sitting in an armchair, reading from a book about the train’s adventures.

In a statement, he said he has “fond memories of growing up with Thomas and Friends and being transported to new places through his adventures.”

Thomas “has been a comforting, familiar face to so many families over the last 75 years — entertaining, educating and inspiring children on important issues through exciting stories and characters,” he added. 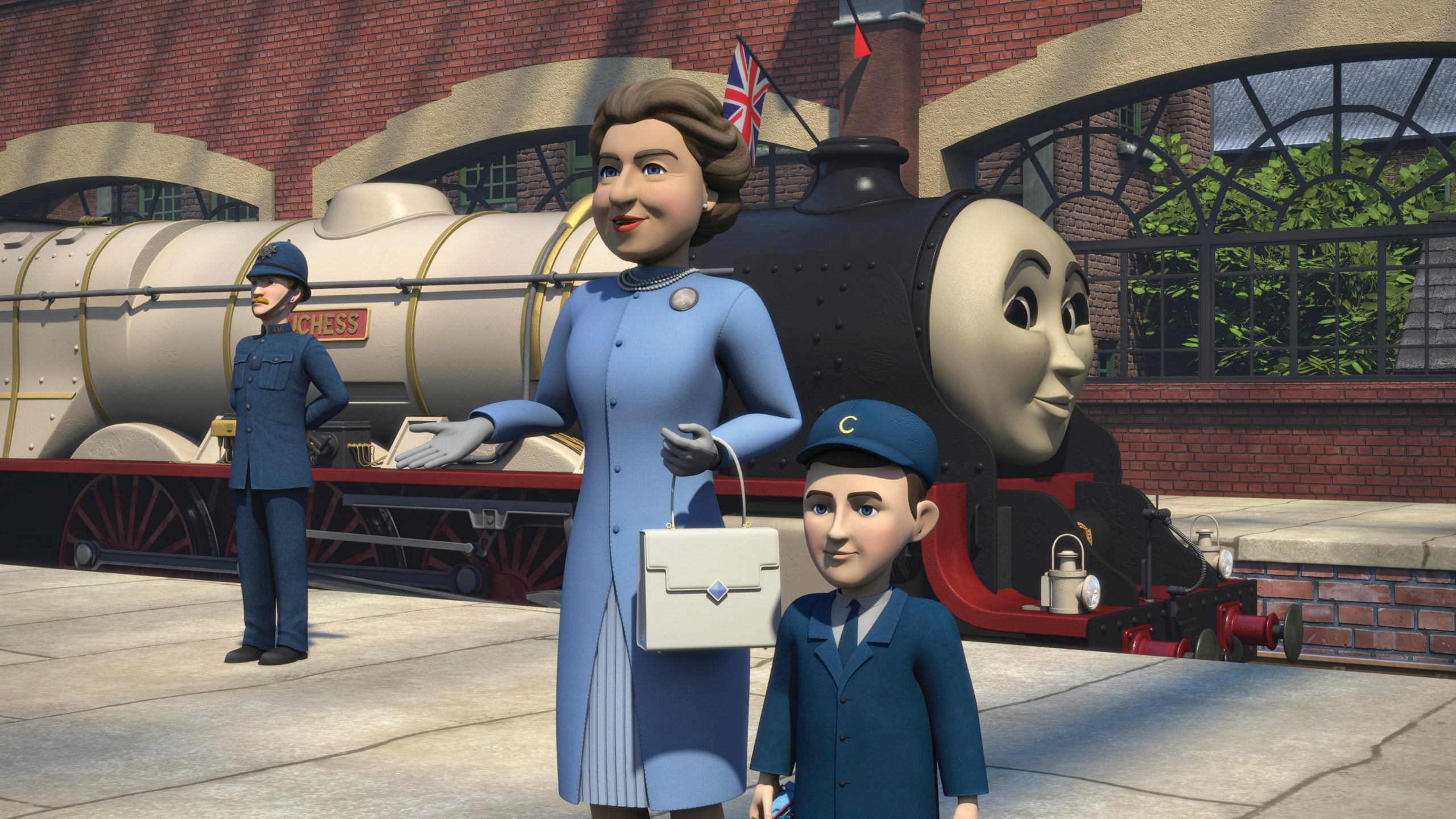 This photo made available on Monday, April 27, 2020, by Mattel, shows a scene featuring Britain’s Queen Elizabeth II and Prince Charles as a boy from an animated special ‘Thomas & Friends: The Royal Engine’ released to mark the 75th anniversary of Thomas The Tank Engine. The special includes a special introduction from Prince Harry. The special will be screened in the US on Netflix on May 1, 2020, and in the UK on Channel 5 Milkshake at 9:05 am on May 2, 2020. (Mattel via AP)

In January, Prince Harry and his wife Meghan, the Duchess of Sussex, announced they planned to quit as senior royals, seek financial independence and move to North America.

The split became official at the end of March, and the couple are currently in California, where Meghan was raised.

Proof of Prince Harry’s attachment to the engine can also be seen in photos of his first day attending nursery in September 1987, where he is seen carrying a Thomas the Tank Engine bag.

The Rev. Wilbert Awdry released the first book in “The Railway Series” 75 years ago. It was originally created as a bedtime story for his son, Christopher, during a bout of measles.

The plucky blue tank engine doesn’t appear in the debut story. He got his own illustrated book in 1946 called “Thomas the Tank Engine” and swiftly took over from Edward, Gordon, and Henry as everyone’s favorite.

The train tales were turned into a stop-motion animation series in the ’80s, moving into CGI in 2009. “Thomas and Friends,” owned by Mattel, is now on air in over 160 countries worldwide.

British actress Rosamund Pike is also onboard “Thomas and Friends: The Royal Engine,” voicing a new character, an important train called the Duchess of Loughborough.

The show will be aired by Netflix in the U.S. on May 1 and on Channel 5’s “Milkshake” show in the United Kingdom. the following day. It will also be broadcast in Canada and Australia later in the month.

Read Next
‘Money Heist’ head writer to give free video lecture about hit show through Instituto Cervantes
EDITORS' PICK
DOH: Too early to say COVID-19 cases are declining
Acer starts the year off strong with the Aspire Vero National Geographic Edition
Duterte praises military but slams police for poor discipline, corruption
Over 3 Million worth of prizes to be won at Smart Padala’s SENDali Manalo Promo!
COVID-19 cases surging in all regions and provinces, says DOH
The best of bayside and city living at SMDC’s Sail Residences
MOST READ
Marcos Jr. visits Cebu, stands as ‘ninong’ to mayor’s son
Duterte praises military but slams police for poor discipline, corruption
Djokovic has to comply with rules to go to Spain, PM says
Comelec junks petition to scrap Bongbong Marcos COC
Don't miss out on the latest news and information.