NEW YORK — Josh Groban, Nathan Lane and Jake Gyllenhaal honored composer and lyricist Stephen Sondheim on Sunday with an online 90th birthday concert that was stuffed with his songs, but delayed by technical difficulties. 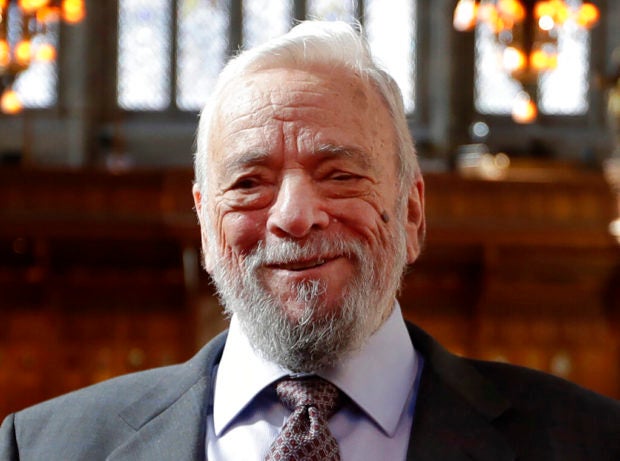 This Sept. 27, 2018 file photo shows composer and lyricist, Stephen Sondheim after being awarded the Freedom of the City of London at a ceremony at the Guildhall in London. Broadway stars will pay a 90th birthday tribute to Sondheim on the free virtual concert “Take Me To The World,” set to air live on April 26. AP Photo/Kirsty Wigglesworth, File

The starry special called “Take Me to the World” featured performances by Lin-Manuel Miranda, Kelli O’Hara, Lea Salonga, Judy Kuhn, Katrina Lenk, Aaron Tveit, Laura Benanti, Brian Stokes Mitchell, Patti LuPone and Bernadette Peters, who closed out the show with a triumphant version of “No One Is Alone” without any accompanying music.

Sondheim actually turned 90 on March 22, but plans to celebrate were taken online after Broadway shut down because of the coronavirus pandemic. The celebration on Sunday night coincided with the 50th anniversary of the opening of Sondheim’s Broadway show “Company,” and served as a fundraiser for Artists Striving to End Poverty.

Sutton Foster was the first to sing, picking “There Won’t Be Trumpets” and her young daughter, Emily, wished Sondheim a happy birthday at the end. Christine Baranski, Audra McDonald and Meryl Streep each downed glasses of booze to team up for a raucous “The Ladies Who Lunch.”

Jason Alexander of “Seinfeld” fame told of being challenged by the composer, while Annaleigh Ashford and Gyllenhaal reunited for a song from their 2017 Broadway partnership, the Sondheim revival of “Sunday in the Park With George.”

There was a duet from Beanie Feldstein and Ben Platt, who sang “It Takes Two.” Victor Garber recalled raptly hearing “Johanna” from “Sweeney Todd” for the first time. In a video from a field with his dog, Mandy Patinkin said of Sondheim: “He simply turns my darkness into light.”

There was an intimate vibe to the event, with many musicians and singers dressed in T-shirts, minimal makeup and in front of simple backdrops.

Starting fashionably late, the tribute kicked off on YouTube more than an hour after the announced start time.

“Send in the singers!” one cranky fan posted, riffing off Sondheim’s classic tune “Send in the Clowns” — that was later sung by Donna Murphy.

It was hosted and produced by Raúl Esparza, who starred in the Tony Award-winning revival of “Company” in 2006. Esparza blamed the tardiness on technical difficulties, tweeting, “The curtain always goes up late on opening night.”

During one aborted start, Esparza appeared, but his opening speech could not be heard and he abruptly walked off-screen. (“They should have hired the ‘SNL’ folks,” said one online commentator.) Esparza later appeared in short videos offering personal commentary and sang “Take Me to the World.”

The delay and the fact that many of the videos were pre-taped reminded some of Fox’s 2019 broadcast of the musical “Rent,” which used pre-recorded material for much of the show after a performer was injured during a rehearsal.

Sondheim’s shows include “Merrily We Roll Along,” “Sweeney Todd” and “A Little Night Music.” He also worked alongside Leonard Bernstein as a lyricist for “West Side Story.”

Steven Spielberg honored Sondheim’s photographic knowledge of film and thanked him for helping on the filmmaker’s upcoming version of “West Side Story.”

“For me it was like going back to school and meeting my most favorite professor,” Spielberg said.

Lane, a frequent collaborator, joked that the oft-celebrated Sondheim was “an unsung hero” of the American theater.

“Here’s my little show business adage for this evening: If at all possible, try to work with a genius,” Lane said. “They’re fun. They’re smart. They’re inspiring and they tend to bring out the best in you. And that’s the kind of genius Steve is.”