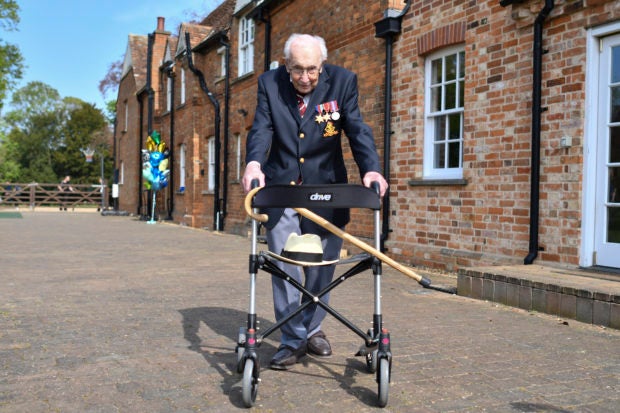 A 99-year-old British World War II veteran who shot to fame raising millions for health workers fighting the coronavirus has become the oldest artist to reach No. 1 in the United Kingdom music singles charts.

“It’s out of this world, truly amazing!” Moore, a captain who served in India, said on his official Twitter account.

The single, which features Moore singing alongside actor and singer Michael Ball and a choir from the state-run health service is also the fastest-selling single of 2020 so far, according to PA.

The race to the No.1 spot had been tight, Martin Talbot, chief executive of the Official Charts Company told PA, until The Weeknd tweeted his support Thursday for the “incredible [99-year-old] war veteran”, and his hope that Moore “can have a No. 1 for his 100th birthday.”

“My grandchildren can’t believe I am a chart-topper!” Moore, who turns 100 at the end of this month, told PA.

Guinness World Records also announced Moore had broken the record for raising the most money in an individual charity walk — more than 27 million pounds ($33 million).

But his journey resonated with a public inundated with grim pandemic coverage and he became a global phenomenon praised by British Olympic great Mo Farrah and Prince William.

The final lap of his garden in Bedfordshire, south England, was met with a guard of honor from the Yorkshire Regiment and broadcast live on British TV on Thursday.

“What a way to finish the week,” Moore’s latest tweet said. “It’s simply wonderful and all for such a good cause. The NHS staff and the volunteers are the real heroes [and] they continue to do such a magnificent job THANK YOU!” RGA