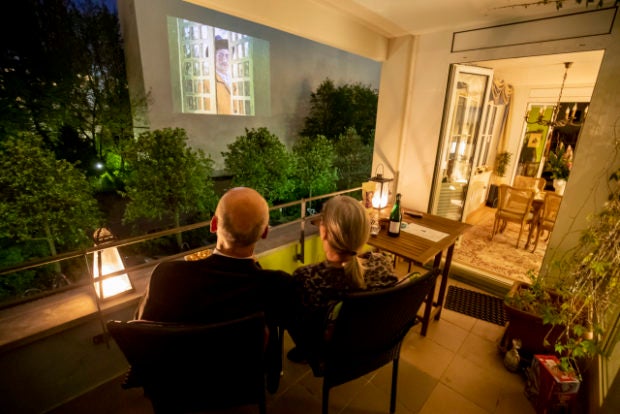 A family watching the movie “Loving Vincent” projected on the wall of a neighboring building from their balcony in Berlin. Image: AFP/Odd Andersen

After weeks of coronavirus lockdown in the German capital Berlin with bars, restaurants, shops and cinemas all closed, movies are coming to the people with projections on bare walls in the courtyards of apartment buildings.

“We’ve got this blank wall here, and we’ve always thought, we should get a film up on there,” says Carola Lauter, who successfully applied to the “Windowflicks” organization behind the backyard sessions.

The project backed by the local Yorck cinema group accepted her request to show “Loving Vincent”, a fully-painted feature film about the life of artist Vincent Van Gogh, and as dusk gathers, people in the block settle in to enjoy the movie’s bright colors projected onto a neighboring building.

“There’s a certain lethargy, fear, uncertainty you can feel around here,” says Lauter. “After all these weeks people are feeling fragile, and I thought it would be good for them to have something positive, enlivening.”

In little clusters at balconies and windows, people sit around by candlelight with takeaway food or snacks brought by workers from a local popcorn maker.

“Since we haven’t been able to go to the cinema for weeks, the cinema is coming to us,” says building resident Undine Zeibig. “We think it’s a really good idea.”

“We just hope that lots of people donate too,” says her husband Uwe. “That will do some good for the artists, and they really need it desperately in these times.”

With ticket sales at zero, Berlin’s cinemas got together to launch an appeal for donations dubbed “Fortsetzung Folgt” (To Be Continued), aiming to raise over 700,000 euros ($755,000).

By Friday, over 100,000 euros had been pledged according to their fundraising website, with an average donation of more than 44 euros ($47).

“We said to ourselves, people want to experience something, so let’s get them outside onto their balconies, into their windows,” says Olaf Karkhoff, who picked the name “Windowflicks” as a play on “the well-known streaming service.”

On top of recreating some neighborhood sense of community, “we wanted to support the To Be Continued campaign,” Karkhoff adds.

And beyond simply showing films, the group has other ambitions, like “a concert, or several concerts, in 100 courtyards simultaneously,” Karkhoff says with a smile.

But his personal pet project is convincing (French travel writer) Sylvain Tesson to let us show his photomontages.

“We could shoot them up onto the wall with a classical music backing track.” RGA