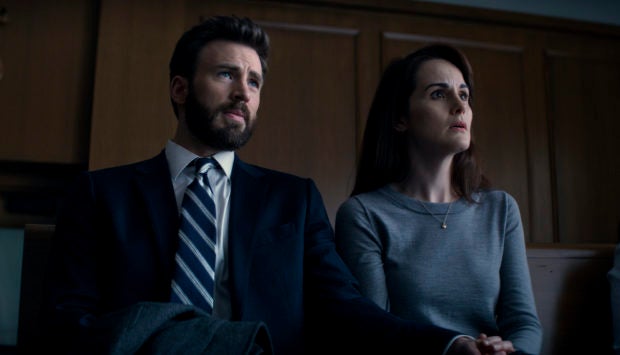 Chris Evans, left, and Michelle Dockery in a scene from “Defending Jacob” (Image: Apple TV Plus via AP)

“I got to sleep in my own bed and see my family on the weekends. And it felt really, for a little while, like I had a regular 9-to-5 job,” the actor said. “That’s tough to beat.”

Evans stars in the eight-part Apple TV Plus drama series “Defending Jacob,” which is set in the Boston suburbs. The “Captain America” star got to lean into his natural accent and visit spots he knew growing up.

But there was one part that was inauthentic: He didn’t get to wear his own Red Sox cap during filming. “I offered to use mine, but mine didn’t look as weathered. Mine was a bit new,” he said, laughing.

Evans stars as an assistant district attorney in a Boston suburb whose 14-year-old son is accused of killing a classmate. He investigates the crime, risking his career as his marriage is shaken and both parents learn they really know little about the private life of their son.

The show raises questions about genetics, family secrets and trust. “Hopefully it’s something that keeps you thinking well after it’s over,” Evans said.

British actress Michelle Dockery stars as the teen’s mother. The “Downton Abbey” veteran said she was attracted to the project because it explored a family’s dynamics under stress.

“What I loved about this story was it focuses far more on the effects that the crime has on the family as opposed to the crime itself,” she said. “The show is really about family and how far would you go for your loved one?”

The series also features Jaeden Martell as their son, Cherry Jones as a defense attorney, Pablo Schreiber as a prosecutor and J.K. Simmons as an estranged family member.

It marks Evans’ first return to episodic TV since his first professional job, the Fox summer 2000 show “Opposite Sex,” which he jokes was “canceled in the blink of an eye.”

He credits showrunner Mark Bomback and director Morten Tyldum for showing “meaningful contours and layers behind each character” and slowly ratcheting up the tension for what is ostensibly an eight-hour movie.

“I think 20 years ago this would’ve been a film and it would have been all engine—you would have removed all opportunities for the characters to breathe. It would have been entertaining, but it really wouldn’t have gone too deep,” he said.

“Defending Jacob” is adapted from the 2012 New York Times best-selling novel of the same name by William Landay. Evans said at the heart of the legal thriller is something everyone can relate to—guilt.

“I enjoy the examination of guilt. That I may be kind of revealing about my own personal nature, but I think there is some unique downstream manifestations from guilt. It’s this thing that I think a lot of people live with but cope with very differently,” he said.

“I think that guilt never fully silences. That echo is always there. But I think he had kind of reached a certain level of peace. And then all of a sudden, all of this trauma had to be exhumed in a very public format.”

Shooting around Boston was a comfort to Evans, but Dockery said she also fell in love with the area, especially Walden Pond, which she calls “one of the most beautiful places I’ve ever been to.” Her dad is Irish and she said there’s “something about that Irish vibe in Boston that I really love.” CL /ra