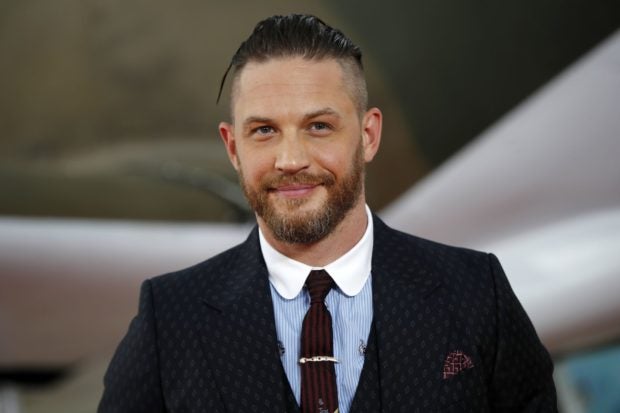 Tom Hardy plays notorious gangster Al Capone in a much-awaited biopic that will release on download services in the US on May 12. Image: AFP/Tolga Akmen via AFP Relaxnews

There is no denying the range of Tom Hardy’s talents. Hot on the heels of news of the imminent VOD release of “Capone,” in which he plays one of the most notorious gangsters in the history of the United States, it has emerged that the British actor is also in high demand as a reader of children’s stories.

The BBC announced that the star of “Venom” will once again feature in six new episodes of “Bedtime Stories” on the network’s CBeebies children’s channel.

Over five days from Monday, April 27 to Friday, May 1, Tom Hardy, who will at times be accompanied by his bulldog Blue, will read one story at 6:50 p.m. British time. The date of his sixth and final story has yet to be confirmed.

The week is set to begin with Simone Ciraolo’s “Hug Me” on Monday. This will be followed by Robert Vescio and Nicky Johnston’s “Under the Same Sky” on Tuesday, Lizzy Stewart’s “There’s a Tiger in the Garden” on Wednesday, Chris Haughton’s “Don’t Worry, Little Crab” on Thursday and then “The Problem with Problems” by Rachel Rooney and Zehra Hicks on Friday, May 1.

You asked. He stepped up! 💪

Unfortunately, this positive initiative will only be accessible to children living in the United Kingdom. “It goes without saying how thrilled we are to have Tom reading more stories for us. It’s during challenging times like this that the BBC serves its purpose to entertain the whole of the UK and these new stories are guaranteed to do just that with their themes of long-distance friendship, sharing problems and true courage in overcoming seemingly impossible challenges,” said Cheryl Taylor, BBC Children’s head of content.

To record the new stories, Tom Hardy was filmed in his garden, while respecting social distancing measures, points out the press release.

This is not the first time that the “Mad Max: Fury Road” actor has taken part in the children’s story series. Hardy read a series of stories for the show in 2016, which have since been watched 1.07 million times on BBC iPlayer. CL /ra