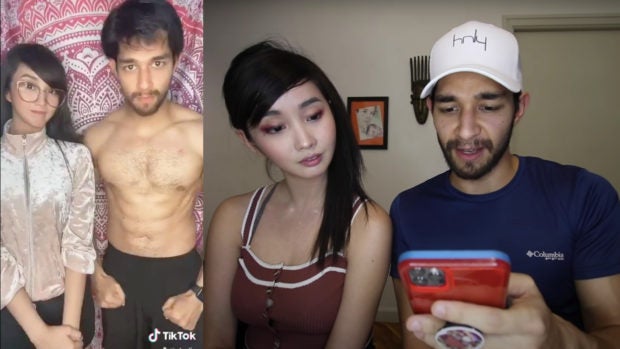 After a TikTok video made by celebrity cosplayer Alodia Gosiengfiao and model-vlogger Wil Dasovich drew the ire of some netizens on Twitter, the couple addressed the “controversy” and apologized to those they have upset in the process.

Gosiengfiao recently joined the TikTok trend called the “My Heart Went Oops” challenge, derived from Tiagz’s song under the same title. The cosplayer also took her TikTok challenge to her other social media platforms including Twitter, where it garnered millions of views “for all the wrong reasons.”

Gosiengfiao’s take on the “My Heart Went Oops” challenge began with her dressed in an unzipped pinkish-white suede jacket with a gray undershirt, together with a pair of round eyeglasses, as seen on her Twitter account last Wednesday, April 15.

The celebrity gamer struck several cute poses before the song’s kick, after which she suddenly appeared all zipped up beside Dasovich, who was not wearing any shirt. Dasovich made a disapproving gesture and escorted Gosiengfiao away from the camera.

Netizens responded to Gosiengfiao, claiming that the couple was perpetuating “toxic masculinity” by “romanticizing men” who dictate how a woman should dress.

Their response to the video

The couple addressed the TikTok video via Dasovich’s vlog on his YouTube channel yesterday, April 16, clarifying their purpose for creating the video and addressing some of the netizens’ comments.

Dasovich said they have been creating a lot of TikTok videos lately while the country is under quarantine. The video in question, the Filipino-American vlogger added, was made just for “fun” and that their purpose was nothing more than to “make people laugh.”

Dasovich and Gosiengfiao also said that the video was “taken out of context” and then explained how the TikTok challenge usually goes.

Other users who have done the same challenge, who are mostly women, usually begin the video by showing their bare face, dressed in a laid-back outfit. They then transform after the bass drops at the song’s lyrics “my heart went — oops,” where they show themselves usually with full face makeup, wearing much more revealing outfits.

“The joke here is that instead of her being revealed, it’s her with her clothes on, it’s not revealing,” Dasovich said. “It’s the twist cause you’re expecting her to have no clothes but instead she has clothes.”

In response to some of the netizens’ comments that they were “romanticizing men” who dictate what women should wear, Dasovich clarified: “The meme is of the girl undressing, she’s baiting the guy. The joke is not about me controlling what she wears, the joke is that you’re not gonna see this today.”

Dasovich also bared their relationship dynamics, saying that “if anything in this relationship, she’s the boss.” He added that his girlfriend has the full faculty for what she could and could not do. The vlogger also stated that he has much respect for his girlfriend and all men and women he encounters.

Gosiengfiao stressed that they do not support toxic masculinity in any way and it was never intended to be in the context of the video.

The couple also addressed the “toxicity” of the “cancel culture” online. Dasovich highlighted the importance of being respectful when talking to someone in the virtual space. Dasovich and Gosiengfiaothen apologized “for upsetting the people it [the video] upset” and emphasized that it was not their intention to do so.  /ra