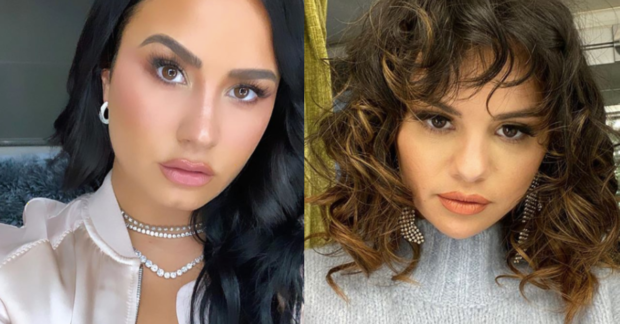 Demi Lovato (L) and Selena Gomez both rose to fame together on the Disney Channel. Image: Instagram/@ddlovato, @selenagomez

Demi Lovato has gotten candid about celebrity friendships that she has let go of, as well as new ones she has been able to form.

The actress and singer admitted that her relationship with Selena Gomez had changed in an exclusive interview with Harper’s Bazaar published yesterday, April 14. They were once close after starring in “Barney” as kids and rising to fame on the Disney Channel together.

Gomez lauded Lovato’s Grammy performance last January, saying in an Instagram Story, “I wish there were words to describe how beautiful, inspirational, and DESERVED this moment was. Demi, I’m so happy for you. Thank you for your courage and bravery.”

Lovato had performed “Anyone”, a song she recorded days before being hospitalized for a drug overdose in July 2018.

Reacting to Gomez’s comment, Lovato told the magazine, “When you grow up with somebody, you’re always going to have love for them. But I’m not friends with her, so it felt…”

“I will always have love for her, and I wish everybody nothing but the best.”

She also said she was not in contact with Jonas Brothers, whom she starred with in the Disney Channel musical “Camp Rock”. She was particularly close to Nick Jonas, but did not attend any of his weddings to Priyanka Chopra.

Among the Disney stars of her generation, she said there is one she remains friends with.

“I talk to Miley [Cyrus],” she said. “She’s awesome, and I love her to death and always will, always have. But I think she’s kind of the only one from that era that I still stay in touch with.”

Lovato has also found a friend in Ariana Grande, once a teen star from rival network Nickelodeon.

“I love the fact that Ariana and I have such a supportive friendship because it’s hard to find,” she said in the report.

“Two women who are in a competitive industry—the whole world seems to want to pit women against each other, so it would be so easy to do that.” Niña V. Guno/JB