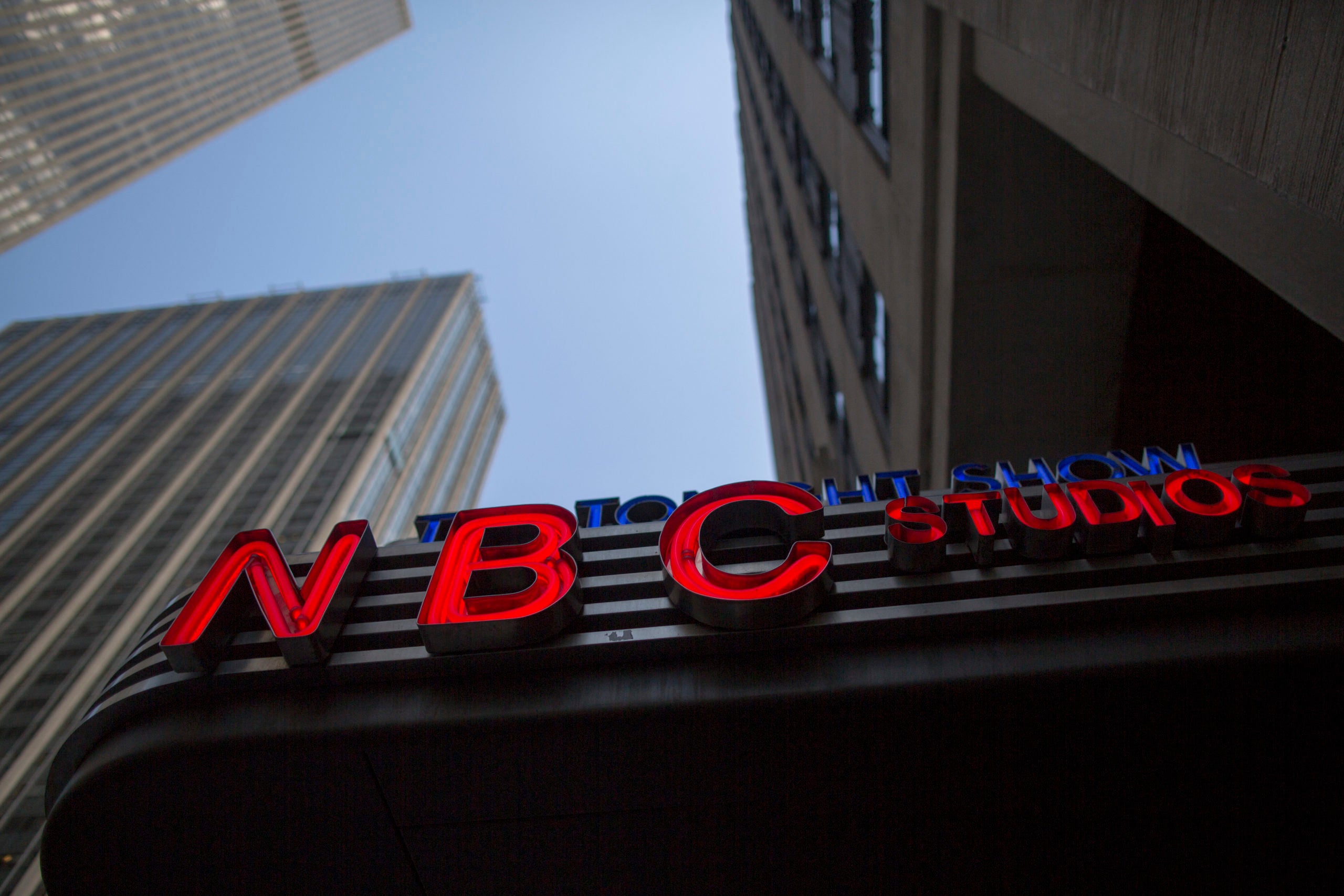 This May 10, 2017, file photo shows an NBC logo at their television studios at Rockefeller Center in New York. For the first time in its lengthy history, “Saturday Night Live” on April 11, 2020, held an all-quarantine version, with stars delivering taped material primarily from their homes. (AP Photo/Mary Altaffer, File)

After being gone for more than a month, the NBC comedy institution returned to the air on Easter weekend by emulating other late-night hosts who have abandoned studios and audiences for DIY merriment amid the coronavirus pandemic.

“It is good to be here, though it also very weird to be here hosting ‘Saturday Night Live’ at home,” Hanks said, speaking from his kitchen. “It is a strange time to try and be funny, but trying to be funny is ‘SNL’s whole thing.”

Hanks, in a close-cropped haircut he said was done for a movie, was one of the first celebrities — along with wife Rita Wilson — to test positive for the virus. They recuperated while in Australia.

He said he had to get used to learning his temperature in degrees Celsius, where 36 was good but 38 was bad, “like Hollywood treats female actresses.”

The world’s new way of keeping in contact — Zoom meetings — was ripe for satire. The show’s “cold open” showed all cast members arrayed in an onscreen gallery familiar to many working from home.

One skit featured a mock Zoom work meeting, where McKinnon and Aidy Bryant played a pair of inappropriate receptionists. Bryant was stopped just in time when she brought her laptop with her into the bathroom.

“I used my license as toilet paper and now I don’t know my own birthday,” Bryant said.

“Every day I eat half a chicken,” she said. “Sorry, chickpea.”

With Bernie Sanders dropping out of the Democratic primary race since the last time “SNL” was on, Larry David appeared from his easy chair to once again impersonate the Vermont senator.

“Don’t worry about me,” he said. “It’s spring in Vermont, so soon it will be up to 40 degrees. And I finally have the time to relax and finish that heart attack from October.”

The show kept to its traditional structure with a musical guest and “Weekend Update.” Martin, on acoustic guitar, played a version of Bob Dylan’s “Shelter From the Storm.” Signs on the wall behind him said “Entrance to Trains,” a nod to the Grand Central Terminal-themed “SNL” set.

Colin Jost and Michael Che imported an electronic audience for laughs during “Weekend Update,” since Che said telling jokes with no reaction reminded him of a hostage video.

“Tuesday was National Beer Day,” Jost said. “Which is the first time alcohol had helped me remember what day it is.”

Che took note that minorities were suffering disproportionately in the pandemic.

“Once Trump starts calling this the Harlem Flu, we ain’t never going to get a cure,” he said.

Alec Baldwin, portraying Trump, called in to the “Weekend Update” segment, although without video since Baldwin didn’t have access to makeup. The faux president noted that “every night at 7 p.m. all of New York claps and cheers for the great job I’m doing,” a reference to the nightly tribute to medical workers.

The show also touchingly paid tribute to music producer Hal Willner, who scored music for many years on “SNL” and died this past week after showing symptoms consistent with the coronavirus. Past cast members Adam Sandler, Tina Fey and Bill Hader were among those who offered remembrances.