NEW YORK CITY—“It’s such a raw film. They were able to show my emotions.”

Arnel Pineda was talking to The FilAm about his biopic, “Don’t Stop Believin’: Everyman’s Journey,” directed by Ramona Diaz. The movie, which screens April 19 at the Tribeca Film Festival, chronicles his
rise from a hard-luck pizza joint singer to front man for one of America’s legendary rock bands.

The film opened with his first concert with Journey in Chile. 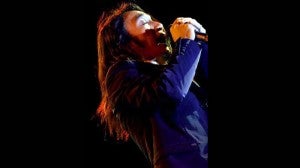 “I still get goose bumps thinking about that very first show. Nakakatakot. I wanted to just get to the first flight out but when I saw the people, I was overwhelmed. I will never forget that day.”

Ramona took an interest in Arnel’s rags-to-riches story and attempted to capture how it all began. Arnel said he hoped the movie would inspire others.

Arnel joined Journey in 2007 when he became the replacement for erstwhile lead singer Steve Perry. His first concert with the band was in 2008 in Vina del Mar, Chile.

“This movie took four years to make,” he said. “They really followed the tour and took time to know the people behind the scenes. “Journey gave me the go signal. They said it would be good for people to know my story.”

Arnel said watching the film gave him a “great” feeling. “Those four years changed my life. It’s sort of like an album.”

He said his story — from the time he was discovered by Journey guitarist Neal Schon via YouTube — will give hope to a lot of people. Arnel hopped from one Philippine band to another and would post his
concerts on YouTube. Schon was impressed on seeing them, contacted Arnel through a friend, and flew him to California for a two-day audition. The rest is platinum-album history.

“A lot of people got curious about the process. It somehow gives people hope, inspiration and a chance for a better future. I know that there are a lot of people like me out there waiting to be given a
break. I never knew this can happen to me. I am very grateful. I believe in second chances,” said Arnel.

He said he will stay with the band “for as long as they want me.”

“They are amazing people to work with. I learn so much from them, each one of them.”

He takes pride in knowing the torch has passed from the iconic Steve Perry to him. Perry stayed with Journey for more than two decades.

“I think that Steve Perry will always be known as the singer of Journey. I have so much respect for him. He is known as ‘the voice,’” he said.

He is aware he is being watched by hardcore Journey fans and will always be compared to him. But there is only one Steve Perry, he stressed.

“There is only one Steve Perry, and I am a fan.”

A family man, Arnel has three kids and another one on the way. He said the “timing is right,” a film about his life had to be made.

Arnel is slated to headline a concert with young singer Kirby Asunto on April 20 at the Cabrini Gym in Manhattan.

“I am so proud of Kirby giving so much recognition to the Philippines,” he said. “At a young age she is given a unique chance to sing our National Anthem for Pacquiao’s upcoming fight in Las Vegas.
She is on to a great start. The journey to stardom will not always be easy. Just keep doing something that makes your heart beat faster and everything will fall into its perfect place.”