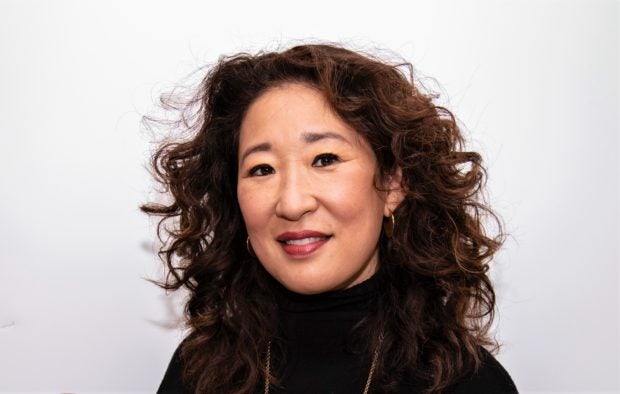 LOS ANGELES—“Yes, I am here in Los Angeles. We have a shelter in place, and it’s becoming tighter and tighter,” Sandra Oh said in our recent video-conference interview with her. “Now, we are at that point where beaches and trails are closed. I am so grateful that I am here at my house.”

Sandra’s two Golden Globes were on a shelf in the background. “Oh my God, you are right!” exclaimed Sandra who scored several breakthroughs in the awards show presented by the Hollywood Foreign Press Association.

Also behind the Ontario, Canada, native was a colorful mural-like room divider in her LA home. Like many of us around the world, she is self-isolating, but doing looping at home for Season 3 of her acclaimed hit show, “Killing Eve,” with Jodie Comer as Villanelle.

“I have found it quite challenging to stay creative actually,” answered the proud daughter of Korean immigrants when asked how she is coping in these coronavirus pandemic times.

“And I’m so happy to talk to you. Because after many years, there is a general relationship in seeing people’s faces. Usually, we are crammed in one room together. But it’s just so good to see how people are. That’s one way I’ve been dealing with the COVID-19. I have been in communication with mostly groups of people from my past.

“I am also the Zoom organizer for all these groups, including for my theater class. I went to the National Theatre School (Montreal, Canada). I graduated in 1993. Recently, a bunch of us were texting and now, every Friday, we have a cocktail (laughs). In our first Zoom, many of us had not seen each other in 27 years almost, since 1993. So it was great to say hi to people.

“That is one of the best things. During this time, our need to connect and making the effort to do so, relationships and health are all what it’s about. I do have a meditation practice which I have been leaning heavily into. Because I do feel the anxiety is so high that my need to sit, practice and meditate is very strong. So I sit for long periods of time, at least a couple of times a day.”

Having played Dr. Cristina Yang in “Grey’s Anatomy” from 2005 to 2014, the 48-year-old talked about the hit medical drama amid the pandemic crisis: “When stuff started happening regarding COVID, I thought, the show should give all our equipment to hospitals. Because our show has a lot of equipment, beds, gowns, gloves. It just stockpiled because, let’s say, within one scene, when you are in the OR, you can have ultimately 30 takes. You could be shooting that scene for four to six hours.

“Each time, you need to get gloved and gowned, so all the medical shows have a lot of equipment. I read somewhere that they started donating it to health care workers in hospitals.

“I have absolutely thought about all the health care workers—all the doctors and nurses, EMTs (emergency medical technicians)—that we all worked with on the show. A lot of the nurses who were working on our show did it as a side job. I had long-term relationships with these people. I bet you they’re all working.

“On a personal note, my brother-in-law is an ER doctor. I think of him every day. And I also think about the influence of that show. Over the past 15 years, people have come up to me and said, ‘I want to go in the medical field.’ I thought, ‘Please, I hope you do because it is clearly one of the most honorable professions you could enter.’ We need to value people who go into the medical field.”

“So am I,” Sandra reacted quickly when told that many more people around the world are addicted to K-dramas or Korean teleserye as they ride out the pandemic. “It’s a tremendous time for South Korea, culturally. I have been gobbling up this one show called ‘Crash Landing on You’ on Netflix.

“It’s about this South Korean businesswoman. She’s parachuting and gets trapped in a hurricane and ends up in North Korea. I always cry and laugh.

“In this time, it’s a great opportunity to catch up on Korean films. It’s true that the next installment of ‘Train to Busan’ is coming. I’m quite interested in seeing that new movie.” 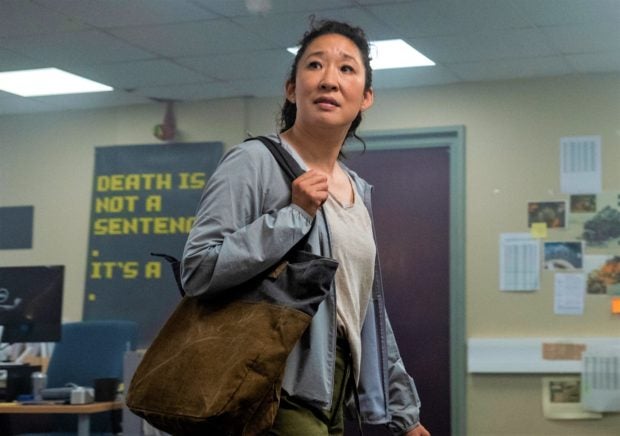 Sandra Oh is back in the British spy thriller “Killing Eve.” —AMC

As for the new season of “Killing Eve,” Sandra gave an update: “At the beginning of the third season, you see Eve in a very different place than you have seen her before. She is almost in retreat. She is like recovering. I’d say this third season is really about Eve struggling.

“There is an event that happens in the beginning of the series that compels Eve to continue the hunt for The Twelve (crime syndicate) and, in some ways, for Villanelle as well. There’s always that initial wave that brings Eve into the story.

“And you see her trying to do it in a different way, independently and with changing her dynamics with her relationship with Carolyn (Fiona Shaw), Villanelle, Konstantin (Kim Bodnia) and even with Niko (Owen McDonnell).”

“There’s a certain scene in the bus,” she said enigmatically about a sequence in one of the new season’s early episodes. “You see Eve in an everyday way, taking the bus. You see her life feels quite small and controlled because she’s actually just trying to recover and stay stable. And something destabilizing happens on the bus.

“But as I feel that Eve is becoming more independent, even in her action, that she is the one driving things. You might see that in this scene in the bus, that she’s actually the person who is driving the connection, and that’s somewhat of a change.”

Looking ahead, the actress noted for her curly locks shared, “Regarding my plan, was coronavirus part of our plan? Not for anyone. I had the most amount of work set up for this year. I had a film and two television series. We are scheduled to go back to ‘Killing Eve’ in September, but we don’t know. Our show is an international show. You can’t shoot Africa in Scotland. And we don’t know what is going on with Scotland.

“So that is a challenging point regarding Hollywood and production. I don’t know where production is going. I don’t really have a plan (laughs) other than how I choose to commit to my work.”

She added, “I am very happy that our team in postproduction mostly is working around the clock. Honestly, this is crazy. All the ways that you usually finish a show have been completely upended. For us, globally, this month of April is very tense. And the fact that the show is coming earlier and hopefully providing a little respite, positive distraction and energy to people while they are sheltering inside, I’m really grateful for.”

“Usually, we are in a tiny room, kind of chucked together,” she said, bringing up our previous interviews. “I am getting more used to this Zoom thing, this kind of talking. One of the things that we are learning in this COVID crisis is that being with each other is better. We will be able to hopefully learn the value of truly connecting because everyone that I have spoken to now, it’s just deeper.

“I don’t know you well, but I do know you (laughs) because I see your face and I am like, I know him! And it really fills me with like, oh my God, how are you, because there is a past history, there is a connection. So my connection with the people who I do know, I am really happy to exercise.”

And if she envies Jodie, costume-wise, since her serial character is often dressed to, er, kill, Sandra chuckled as she admitted, “Oh the clothes, it pains me. I have this one story. I was on set and Jodie was doing a scene. I was looking at the monitor and I was like, are those wool Gucci trousers? (Laughs) I was like, ‘I just got those trousers.’ Me as Sandra personally, I just got those trousers.

“I was like, for a press event, I have to wear these trousers because it’s from my own personal taste. But, oh my God, the character (Jodie’s Villanelle) is wearing my taste in clothes.”

Still on Jodie, Sandra commented, “She and I don’t work together a lot. Usually what happens is, story-wise, you keep Eve and Villanelle apart and at a certain point, they crash into each other and then have their story line together. For me, I can say that Jodie and I have a profound and trusting relationship.

“We don’t really talk about things because we both understand there’s a lot of mystery in the relationship between Eve and Villanelle, and we play it as such. I don’t want to know what she is doing and I don’t think she particularly wants to know what I’m doing. Because I do feel like, at this point, having three seasons together, we trust each other when the magic is happening. So that’s how we work it.

On whether she foresaw “Killing Eve” running this far, Sandra replied, “No, I can tell you it wasn’t conceptualized from the get-go like that. I have been in this game a long time, and you can’t. It’s just impossible. Even in the best of circumstances where you seem to have all the right ingredients, sometimes it doesn’t happen. I am extremely fortunate that two shows that I have been on happened to come up at a time in the culture where there is an opening for them.

“I felt that very much with ‘Grey’s Anatomy’ and even more so with ‘Killing Eve.’ When ‘Killing Eve’ came out, it was near the birth or near the ramping up of the #MeToo and Time’s Up movements. Especially with Time’s Up and the call for female-driven stories, women working on them and being the leaders of the storytelling.

“We were actually doing so that was exciting to already be in it. Regarding the life of the show, a lot of times, you can’t control it. So, I was glad that ‘Killing Eve’ has a life. And, hopefully, it will continue.”