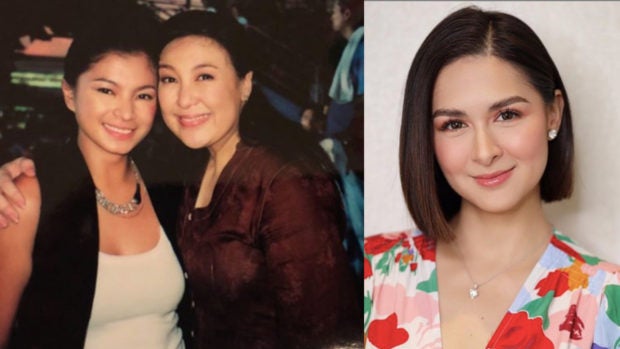 Cuneta, who also played “Darna”, lauded Locsin’s tent fundraiser for hospitals and Rivera’s food drive through a series of posts on her Instagram account yesterday, April 6. Aside from the two actresses, she also commended two more Darnas: Asia’s Songbird Regine Velasquez and Star for All Seasons Vilma Santos for their own contributions.

Cuneta began the “Darna” tributes with Locsin, reposting a video of the celebrity philanthropist’s effort to set up tents at the Bureau of Corrections for her UniTENTweStandPH initiative.

Cuneta showed Locsin dressed in her Darna costume side by side with her own throwback photo, when she made a cameo as Darna for the 1986 “Captain Barbel” movie.

“Your two Darnas love you, our FRONTLINERS!” Cuneta said.

Moments later, Cuneta acknowledged Rivera’s effort by showing Rivera wearing the iconic red and gold superhero suit back when she played the role during its 2009 TV adaptation.

(She has just been quiet but she also gave tents to Darna Angel’s cause. She even included Ding, which we shall hide under the name of Ogie Alcasid!)

Cuneta did not limit her acknowledgment to the Darnas. She also lauded Judy Ann Santos who played the TV superhero “Krystala” back in 2004.

(And the one who carried a giant pot, she made acrylic masks! Long live, Krystala.)

Lastly, Cuneta paid tribute to the Darna which she grew up with, played by Santos. Cuneta narrated how back in the day, she did not expect to be an actress and even become friends with her idol.

Cuneta addressed Santos, “I miss and love you, Ate (sister)! Alam ko busy ka sa pagtulong kahit di nakikita kasi ganun ka din eh (I know you are busy helping though not seen, because that is also how you are)!” JB