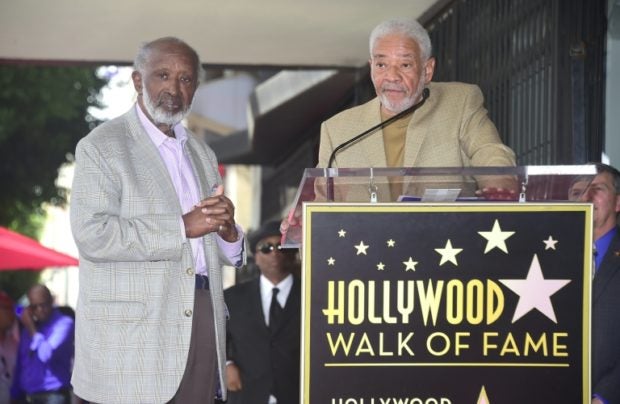 Music mogul Clarence Avant (L) looks on as Bill Withers (R) addresses the audience at Avant’s Hollywood Walk of Fame Star ceremony on October 7, 2016 in Hollywood, California, where Avant, known to many as the “Godfather of Black Music” was the recipient of the 2,590th Star. Image: AFP/Frederic J. Brown

Bill Withers, the legendary performer who defined 1970s soul with timeless hits like “Ain’t No Sunshine” and “Lean on Me” has died, his family said in a statement.

The Grammy-winning artist succumbed to heart complications, according to his family, which said it was “devastated” over the loss.

“A solitary man with a heart driven to connect to the world at large, with his poetry and music, he spoke honestly to people and connected them to each other,” they said. “In this difficult time, we pray his music offers comfort and entertainment as fans hold tight to loved ones.”

The youngest of six who was born in a segregated coal mining town in West Virginia during the last years of the Great Depression, Withers served in the Navy and worked a number of odd jobs until his mid-30s when he began recording music.

The artist’s recording career lasted just 14 years, he released his final album in 1985, but his hits that melded gritty southern blues with smooth R&B have endured for decades as global classics, including “Lovely Day” and “Just the Two of Us”.

His legacy continued to grow even after he left the industry, an ardent crusader for creative freedom, his disdain for the labels was no secret, with many artists covering and sampling his songs.

Withers’ song “Grandma’s Hands”, for example, found renewed fame as a rap sample in the smash “No Diggity” by Blackstreet, featuring Dr. Dre and Queen Pen.

Tributes began pouring out to the late songwriter, whose death came amid stress over the deadly coronavirus pandemic.

“Aw man, Bill Withers was really the greatest,” tweeted Chance the Rapper, calling the singer’s hits “some of the best songs of all time.”

Aw man, Bill Withers was really the greatest. Grandma’s Hands, Ain’t No Sunshine, Lean on Me, Use Me Up, Just The Two Of Us and obviously Lovely Day are some of the best songs of all time. My heart really hurts for him, it reminds me of playing records with at my grandma’s house

He added, “My heart really hurts for him, it reminds me of playing records [at] my grandma’s house.” JB