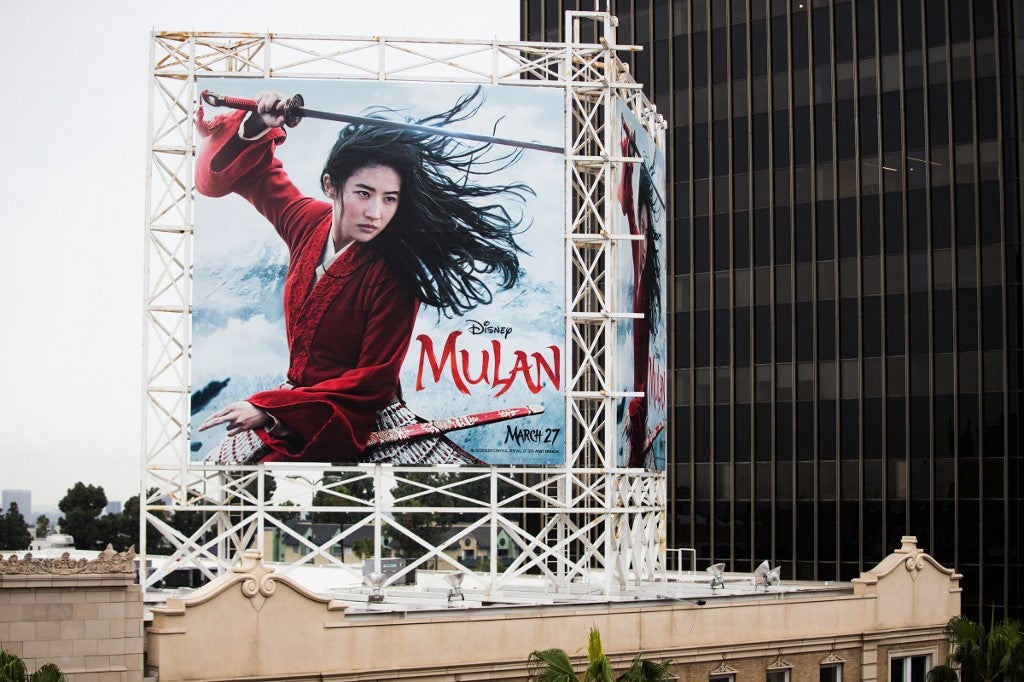 An outdoor ad for Disney’s “Mulan” is seen on March 13, 2020 in Hollywood, California. The spread of COVID-19 has negatively affected a wide range of industries all across the global economy. Rich Fury/Getty Images/AFP

LOS ANGELES — Disney delayed the releases of more than a dozen major films Friday, but has not given up on a summer blockbuster with “Mulan” now penciled in for a July launch despite the coronavirus pandemic.

The revised schedule confirmed eagerly awaited Marvel movies “Black Widow” and “The Eternals,” as well as the latest “Thor” and “Doctor Strange” sequels, have all been pushed back as the virus shutters theaters around the world.

“Black Widow” starring Scarlett Johansson, the first of the new “phase” of the record-breaking superhero franchise, will now debut in November, causing most subsequent installments to move later in a domino effect.

One untitled Marvel film previously set for summer 2022 was removed from the schedule entirely.

But in a note of optimism that North American movie theaters could reopen sooner rather than later, “Mulan” — a mega-budget live action remake of the tale of a legendary Chinese warrior — is now tentatively set to launch July 24.

That chimes with positive notes from National Association of Theatre Owners officials, who told a webinar Friday that theaters could reopen late May or June with social distancing measures in place to seat audience members far enough apart.

However, Disney’s “Artemis Fowl” became the latest major studio film to skip theaters entirely and move directly to streaming — a trend that has triggered alarm among movie exhibitors.

The children’s book adaptation will debut on Disney+ instead, at an undisclosed date.

The next Indiana Jones film, currently untitled, was pushed back an entire year to July 2022, while a confirmed “Captain Marvel” film bucked the trend by moving to an earlier slot that same month.

Read Next
‘Lovely Day’, ‘Lean on Me’ singer Bill Withers passes away at 81
EDITORS' PICK
What to watch out for when selecting a video surveillance solution
House energy committee chair Arroyo bats for cheap electricity
Look Through: The fate of impounded stray dogs
23,000 cops to be deployed nationwide for school reopening
Unleash the photographer in you this World Photography Day with vivo smartphones
DOH says COVID-19 cases plateauing, but public shouldn’t be ‘complacent’
MOST READ
Sharon Cuneta asks for prayers for friend in ICU who suffered silent stroke
Korina Sanchez reunites with former ABS-CBN co-anchors Julius Babao, Cheryl Cosim
Secrets and lies
Solons file resolutions seeking probe on ABS-CBN, TV5 merger
Don't miss out on the latest news and information.