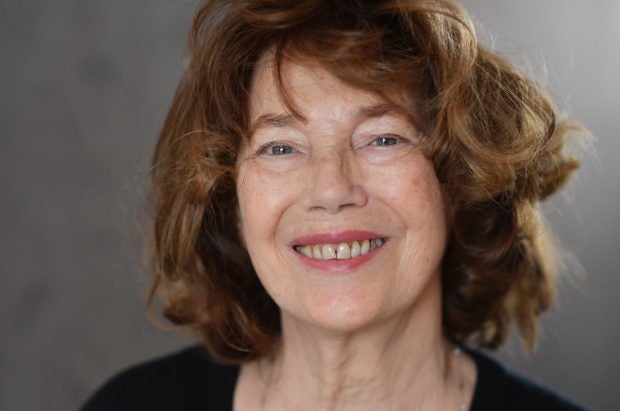 On Friday, the 73-year-old performer will bring her signature breathy vocals to New York, where she will stage her traveling symphonic tribute to Gainsbourg’s work set to orchestral arrangements.

This version of the show—born in 2016 as a one-off performance in Montreal, but which has since continued to tour—includes appearances by Charlotte Gainsbourg, Birkin’s daughter with the late French superstar, and Iggy Pop.

“He would have been so delighted to be here in New York, and for people to be listening to his songs,” Birkin told Agence France-Presse prior to the performance, one of the cult Hermes handbags named after her perched on a coffee table in her Manhattan hotel room.

“He didn’t get to sing in New York,” the British-born actress, model and singer said of Gainsbourg, who died in 1991 at age 62 after a heart attack. “It’s fun to take him everywhere.”

“I don’t think I could do better for Serge, I really don’t. Or for me, for that matter.”

The celebrity pair—a cool-kid it couple on the scale of Sonny and Cher—met on the set of the 1969 film “Slogan” and were a hot-ticket item until their split in 1980.

After she left him, Birkin said Gainsbourg became “the friend he’d never been to me.”

Birkin owes her enduring fascination with Gainsbourg, who was 18 years her senior, to his singular talent, childlike spirit and humor.

“If you’re with a very brilliant man—a great composer and a writer and everything—I think there are quite a lot of people like that, men or women, that can be fastidious and perhaps even rather boring.”

“Whereas Serge is a hoot,” she said, crediting Gainsbourg’s look, featuring stubble and naked ankles, as proto-hipster.

“All the girls came back with him because he was fun to be with. And that perhaps was the most touching of his secrets—that and being an eternal adolescent.”

Despite the rosy memories, France’s pop poet had a reputation as something of a cad—and no shortage of questionable behavior to his name.

Gainsbourg performed a duet with Charlotte, then 12, entitled “Lemon Incest,” told Whitney Houston in crass terms on primetime television he wanted to sleep with her, and saw the Vatican condemn his racy song “Je t’aime … moi non plus”—which means, awkwardly, “I love you … neither do I.”

“You could hardly do better than being banned by the Pope and the BBC. ‘Lemon Incest’ was a bit dodgy too,” she recalls.

“People tuned in just to see what would happen,” Birkin said. “When taxi drivers say with a tear in their eye, ‘Oh, we do miss him because no one’s like him today’—it’s true.”

“Everything is so politically correct today—I know he’d be just as outrageous because it was half the fun.”

Yet Birkin praised the #MeToo movement that has condemned misconduct by powerful men: “I’m glad that it’s happened for girls and they can stick out against their boss that’s been plaguing them.”

But asked about the recent uproar over Roman Polanski’s best director win at the Cesars film awards, Birkin said since he was allowed to be among award hopefuls, it’s not wrong for him to have won.

Wins by Polanski—wanted in the United States for the statutory rape of a child in 1977—at the recent ceremony prompted high-profile walkouts and protest.

“Given that he was up there, then each to his own. People have a vote—if they don’t want to vote then don’t vote,” Birkin said.

The performer again praised the changes afoot, however, saying that “I have to feel the girls these days do feel that they can say no.”

“And other people will stick with them. And I think that the boys are being educated really well,” she said.

“One knows it will never be the same again. And that’s a good thing.” CL /ra

Read Next
Christian Bale to play villain in Thor 4, Tessa Thompson confirms
EDITORS' PICK
Geek out at TOYCON 2022 powered by Smart Signature
House energy committee chair Arroyo bats for cheap electricity
UK’s Boris Johnson will resign, BBC reports
High inflation: Your P1 is now worth only 87 centavos
Unemployment rate up to 6% in May
High-risk pregnancy: Reducing your risk is in your hands
MOST READ
Suspect in grisly killing of missing woman in Bulacan arrested
Kim Atienza’s daughter flaunts bikini body in response to critics of her ‘revealing photos’
Japanese artist who created ‘Yu-Gi-Oh!’ found dead in the sea
FDA probes popular Filipino noodle brand for ‘high level of ethylene oxide’
Don't miss out on the latest news and information.