It seems there’s been a lot going on this past week. I thought what I called my birthday week would be somewhat uneventful, with just the usual filming of “The Voice Teens” battle round rehearsals and mentoring, plus personal celebrations before and after. Nope, that was definitely not the case.

When I showed up to start my workday on Friday, the building was in its usual state of hum and hubbub, except that every employee was dressed in white with ribbons on their chests in the colors of the ABS-CBN logo.

A solidarity rally was scheduled for that evening and everyone was unified with the dress code for the day. My filming day would end around the time the rally was to begin.

However, quiet would not be the word of the day. Not at all. 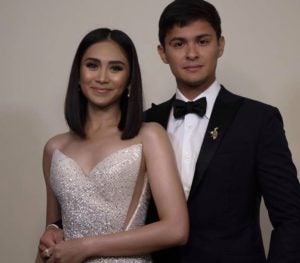 The day before, Thursday, there was already buzz that one of our beloved coaches Sarah Geronimo was getting married on this day in a secret ceremony somewhere in the metropolis.

I got an e-mail from my boss here at the Inquirer asking if there was any truth to it, and I answered with a, “Huh? She’s filming today!” I was in another part of the city getting ready for an event.

A lot of the staff at “The Voice” didn’t actually think it was true, because she was present and working without any sign of stress or rushing. A bunch of us were on Facebook jokingly discussing it, not thinking for even a minute that this whole wedding thing was anything but a sham.

Then, on Friday, as I was walking from my dressing room to the studio, the news that ended up reverberating throughout the city… and eventually the country… met us head-on: SHE GOT MARRIED! SHE ACTUALLY GOT MARRIED!

But here’s the most important question for any of us to ask: Is she happy?

I would like to believe the answer to that question is yes.

Later that evening, as I was having supper with a bunch of friends close to home, a video call from her husband came in. I got to see her face, completely scrubbed of make-up, flashing a brand-new piece of hardware on her finger, with him flashing his own. And she looks happy. They both do. Truly, peacefully, undoubtedly happy.

To the new Mr. and Mrs. Guidicelli, my most heartfelt congratulations and best wishes!

Ohhhhhhh, this full week of taping is going to be so much fuuuuuuuun!