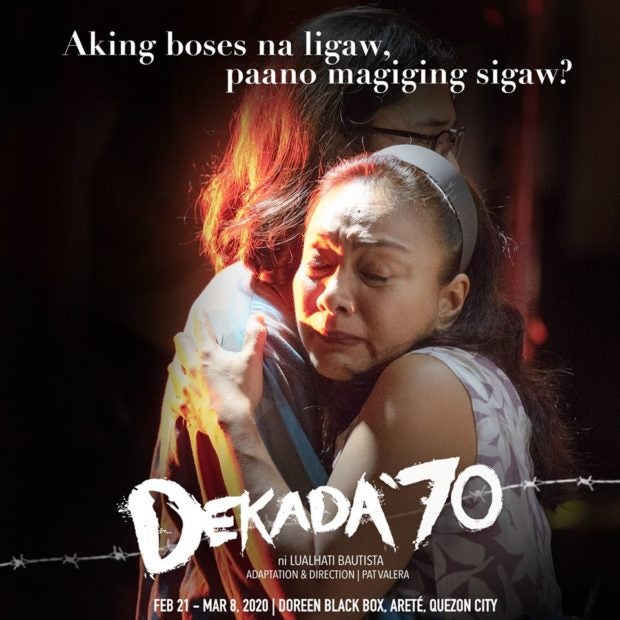 The Twitter account of the musical “Dekada ’70” remains suspended during its opening weekend following sold-out shows and just before the anniversary of the EDSA revolution on Feb. 25.

While the takedown was taken note of by fans and Twitter users recently, the musical’s writer-director Pat Valera revealed to INQUIRER.net that the account has been actually down since November 2019, just in time for the initial promotions of the play.

The play is an adaptation of acclaimed author Lualhati Bautista’s eponymous novel which tackles martial law abuses from the lens of a middle-class family in the 1970s.

One of the play’s stars, Juan Miguel Severo, spoke up about the suspension this afternoon, Feb. 23 on Twitter.

He shared a screenshot of a notice from Twitter stating that the account (@dekada70musical) is “currently suspended,” along with a quote from esteemed writer Ricky Lee: “Alam naman natin, ang mga kuwentong sinusupil at hindi makalabas ay nagiging mga halimaw.”

(We all know that stories being suppressed and cannot be shared become monsters.)

Severo also noted yesterday, Feb. 22, that the hashtag #Dekada70Musical was a trending topic on the social media platform.

The musical, adapted and directed by Valera, is produced by Black Box Productions. It runs from Feb. 21 to March 8 at Arete in Quezon City, with the first two weeks already sold out. Tickets for the closing weekend (Mar. 6 to 8) are still available. JB

Lualhati Bautista: I cried both times that I watched ‘Dekada ’70’

Martial law: A little story from a dark period