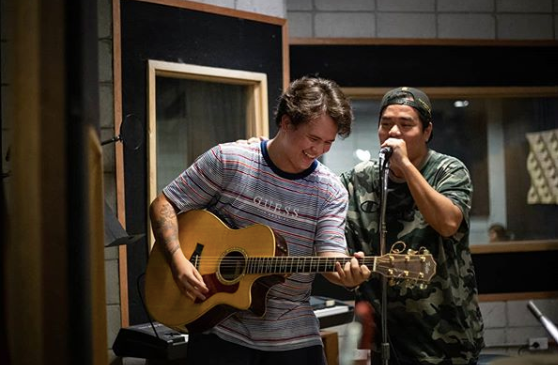 Fans will soon be enjoying the result of the much-awaited collaboration between singer-songwriter Juan Karlos Labajo’s band, Juan Karlos, and veteran rapper Gloc-9, as they reveal that their new music is coming out this February.

The rapper gave fans snippets from what appears to be behind-the-scenes moments of a music video shoot, via Instagram yesterday, Feb. 17.

Gloc-9 and members of the rock band Juan Karlos, led by Labajo, can be seen in an abandoned, garbage-ridden lot surrounded by ruins of buildings.

The veteran rapper on Feb. 12 also teased that their new project is now finished by simply saying, “Luto na po (It is now cooked)!”

Labajo likewise teased the collaboration between the “chefs” through his own Instagram account the day before, telling fans that they can expect new music this month.

“Chef jk and chef gloc cooking something. Coming in hot this month,” he said on Feb. 11.

The “Buwan” singer had already revealed in September last year, through an interview with Push, that his band is working on a new, full-length album featuring collaborations with Gloc-9. JB