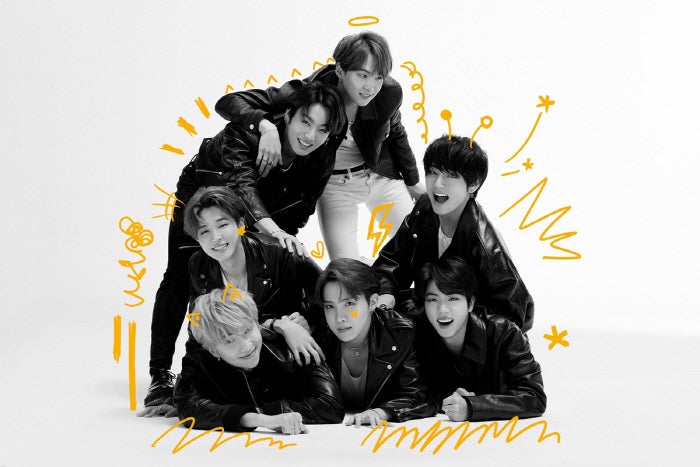 SEOUL — BTS shared a whopping 20-song tracklist on Monday for its new album, “Map of the Soul: 7,” just ahead of its release Feb. 21.

The list is the longest ever for a BTS album and features 15 new tracks — including “On,” which fronts the new album — along with five songs previously released as part of last year’s “Map of the Soul: Persona” EP.

The new songs include “Filter,” “Louder Than Bombs,” “Zero O’ Clock,” “Inner Child,” “Moon,” “Respect” and “We are Bulletproof: the Eternal.”

“On” will be released in two versions: one by BTS only and one featuring renowned Australian musician Sia. BTS reached out to the popular “Chandelier” singer and Sia eagerly accepted the chance to collaborate, according to BTS’ label, Big Hit Entertainment. The Sia version will be a special digital-only release and won’t be on physical copies of the new album, the agency added.

Another big-name pop artist, Troye Sivan, announced on Twitter that he co-wrote “Louder Than Bombs,” joining the ranks of high-profile musicians who have teamed up with BTS such as Halsey, Ed Sheeran, the Chainsmokers, Steve Aoki and Nicki Minaj.

On the day of the album’s release, BTS will appear on “The Today Show” for a live interview, and the official press conference is scheduled Feb. 24 in Seoul.

The first stage performance of “On” will be aired Feb. 24 on “The Tonight Show Starring Jimmy Fallon.” The band recorded it along with “Black Swan,” another single from the new album, when it appeared on the late-night show earlier this month.

BTS has created great anticipation for its new album by dropping three sets of concept photos. The official music video for “On” will be unveiled Feb. 28.