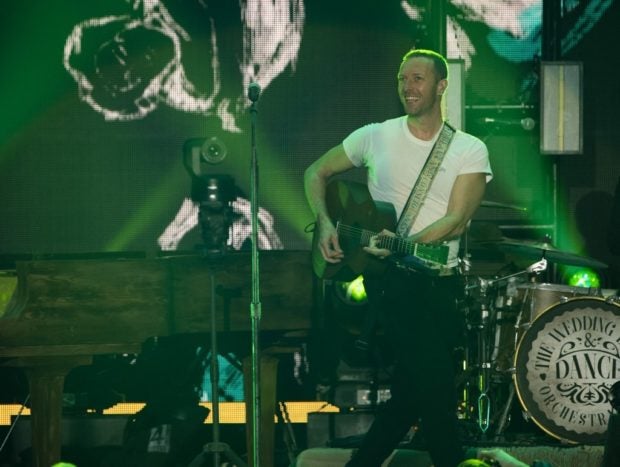 Coldplay performs on stage at the 2020 iHeartRadio ALTer EGO concert at The Forum in Inglewood, California, Jan. 18, 2020. Image: AFP/Robyn Beck via AFP Relaxnews

Coldplay has unveiled the visual for “Cry Cry Cry,” which was co-directed by Cory Bailey and “Fifty Shades of Grey” actress Dakota Johnson.

The tender video takes place on the dance floor of London’s Rivoli Ballroom, where a smitten couple dances through the different stages of their relationship.

The two lovers slowly age as the clip unfolds, with the elegant choreography by Celia Rowlson-Hall reflecting how strong their love has remained despite the passage of time.

“In a book about the world/ Called ‘The Luminous Things’/ There are trees and flowers glowing / While Jizo Bodhisattva sings,” frontman Chris Martin and Jacob Collier croon in the R&B-infused song.

“Cry Cry Cry” is the latest cut from “Everyday Life” to receive an accompanying video, following “Orphans,” “Daddy” and the title track.

The double album, composed of “Sunrise” and “Sunset,” arrived nearly four years after Coldplay’s 2015 “A Head Full of Dreams.”

Shortly after the release of “Everyday Life,” Coldplay announced that the band will not tour in support of its new double album due to concerns about the environmental impact of concerts.

“We’re taking time over the next year or two, to work out how our tour can not only be sustainable [but] how it can be actively beneficial,” frontman Chris Martin told BBC News back in November.

The singer-songwriter added that the band would eventually hit the road in support for “Everyday Life” on the sole condition that the tour is entirely carbon-neutral. CL /ra