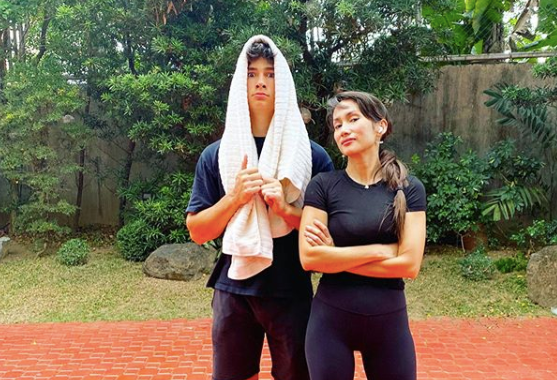 It is no secret that actress-model Ina Raymundo, undoubtedly one of the fittest celebrity moms in the country, is still physically active at 44. On Valentine’s Day, she spent some quality time with her family by playing hoops with her 15-year-old son, Jakob Poturnak, on a one-on-one game.

Raymundo via Instagram yesterday, Feb. 14, gave fans a peek at what went on inside the court between the 5’4″ mom and her 5’11” son.

The short clip shows a cheerful Raymundo, giggling and laughing as she dribbles and tries to score against the much taller Jakob. After a failed shooting attempt, the mother can be heard appealing: “Kuya, let mama shoot!”

The post also came with a picture of the mother-and-son duo donning their athletic attires. Jakob is Raymundo’s only son with Brian Poturnak, and is brother to the couple’s three daughters Erika, Anika and Mikaela.

LOOK: Ina Raymundo still looks like her 16-year-old self in throwback moment