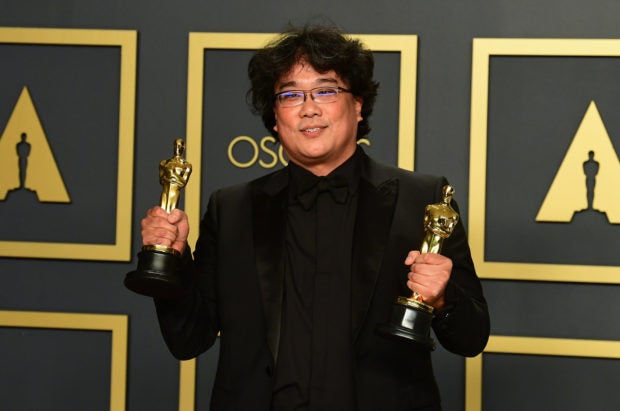 This year’s historic Oscars were watched by the award show’s smallest ever audience, with just 23.6 million viewers tuning in to ABC’s domestic television broadcast.

But numbers watching the stunning achievement from home were well down from last year’s impressive 29.6 million viewers.

For the second year running, the Academy Awards went without a host.

The format was intended to replicate the success of last year’s show, which had enjoyed a trend-bucking uplift in viewers.

Guest presenting duos including Steve Martin and Chris Rock, and Will Ferrell and Julia Louis-Dreyfus, popped up throughout the evening.

A range of musical performances, from Elton John to Eminem to Billie Eilish, took the show to its three-and-a-half hour running time.

But they did not provide the same lure as the 2019 edition, which saw the band Queen open proceedings, and featured a memorable duet performance by Lady Gaga and Bradley Cooper.

Bong “not only contributed to a history-making 92nd Academy Awards ceremony, but kept it from ranking among the worst telecasts of all time,” wrote Indiewire.

Performances from over-familiar faces such as Randy Newman and Elton John “resembled a timeline of every Oscar night you’ve watched in the past two or three decades,” wrote the Washington Post.

Oscars viewing figures, along with nearly all award shows, have been on a steady decline in recent years, from above 43 million as recently as 2014.

This year’s awards were also criticized for failing to nominate minorities in key categories, or any female directors, prompting some to call for a boycott of the show.

But it turned out to be a record-breaking night for women, with one-third of the 39 statuettes handed out to female winners. CL/NVG