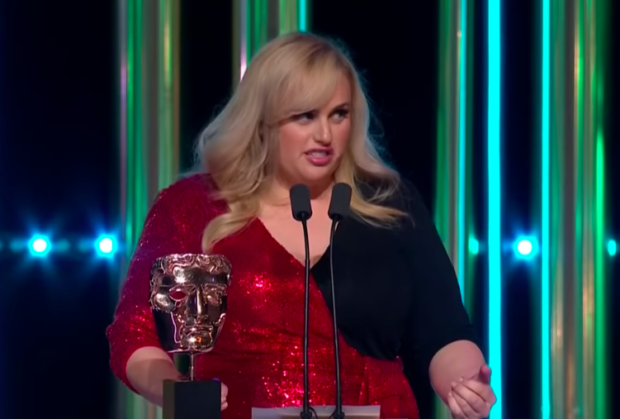 Rebel Wilson giving her speech before presenting the winner for Best Director during the 73rd Baftas. Image: screenshot from YouTube/@BAFTA

Australian actress-comedienne Rebel Wilson did not hold back as she delivered a series of controversial jokes in just three minutes during the 73rd British Academy Film Awards (Baftas) held on Feb. 3, at the Royal Albert Hall in London.

Wilson received a lot of praise for her hilarious speech tackling the all-male nominations for best director, the Royal family and even her own vagina. Baftas’s official YouTube channel uploaded the comedienne’s speech also on the same day.

The Australian actress took a dig at the Royal family amid them being ridden with controversies, including Prince Andrew‘s ongoing sex scandal, and Prince Harry and Meghan Markle’s recent decision to cut off their royal titles.

“It is really great to be here at the Royal Andrew – uh, Royal Harry – no, sorry. Um… Royal Phil… uh at this royal palace place,” she said to an audience which included the Duke and Duchess of Cambridge, Bafta president Prince William and Kate Middleton.

Wilson then apologized because “no one’s getting a massive gift bag” that night, saying, “Instead, you’re all getting a gifting wallet. Yeah, which is funny, because that’s also the nickname of my vagina.”

The comedienne, a cast member of Tom Hooper’s “Cats”, also made fun of the said film, which flopped at the box office and received a lot of negative reviews.

“I made this dress by sewing two old dresses together,” she said as she donned a red and black dress. “The red is from that one time I didn’t win Miss Australia, and the black is from a funeral I just went to for the feature film ‘Cats’.”

She then noted that it was “strange” how “Cats” was not nominated in any category.

“I’m not sure if anyone here is across the controversy, but this year, there has been a distinct lack of nominations for ‘felines,'” she said, subtly taking a dig at the controversial all-male list of best director nominees for this year’s Baftas, which has also been plaguing the Oscars.

Because she was presenting the best director award, Wilson said that at least she got to hold the trophy, which was sculpted to look like a mask.

“And wow, what a great way to stop yourself from getting coronavirus,” she joked of the ongoing global outbreak of the novel coronavirus, earning laughter yet again after holding up the trophy to cover her face with it.

Before presenting the award to “1917” director Sam Mendes, however, Wilson let out one last jab at the not-so-diverse list of director nominees.

“I look at the exceptional, daring talent nominated in this category, and I don’t think I could do what they do,” she said. “Honestly, I just don’t have the balls.” JB

‘1917’ wins big at Baftas to take pole position for Oscars