‘1917’ wins big at Baftas to take pole position for Oscars 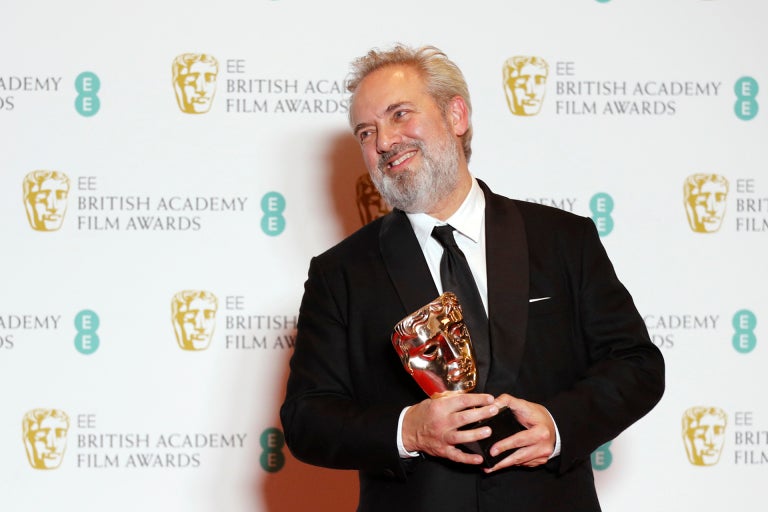 British director Sam Mendes poses with the award for a Director for his work on the film “1917” at the BAFTA British Academy Film Awards at the Royal Albert Hall in London on Feb. 2, 2020. Image: AFP/Adrian Dennis

The movie, which follows two British soldiers on a perilous mission across no man’s land, had already scooped the Golden Globe for best drama, and has 10 Academy Award nominations including for best picture.

Hailed as a groundbreaking piece of cinema, it scooped seven of the nine prizes it was nominated for at Britain’s top film awards, including in cinematography, production design, sound and special visual effects.

“It’s moving for me to get this in my hometown for the first time,” said Mendes, the first British winner of the best director Bafta since Danny Boyle prevailed in 2009 for “Slumdog Millionaire”.

“Thank you to all the people who have gone to see this in the cinemas,” he told the star-studded ceremony at the Royal Albert Hall in London.

At this year’s Baftas, the same five movies filled the best film and best director nominations.

Joining “1917” and Mendes were “Joker” (Todd Phillips); South Korean comedy thriller “Parasite” (Bong Joon-ho); “The Irishman” (Martin Scorsese); and “Once Upon a Time in Hollywood” by Quentin Tarantino.

But the evening was perhaps equally disappointing for hit film “Joker”, which led the way with 11 nominations but ended up with just three prizes, including Joaquin Phoenix for best actor.

He beat Hollywood heavyweight Leonardo DiCaprio (“Once Upon a Time in Hollywood”) as well as Adam Driver (“Marriage Story”), Taron Egerton (“Rocketman”) and Jonathan Pryce (“The Two Popes”).

Renee Zellweger claimed the best actress award for her portrayal of Judy Garland’s late-life comeback tour in “Judy”, marking a stunning renaissance for her own wide-ranging career.

“This is very humbling,” she told the audience of Hollywood royalty. “Miss Garland, London town, which you have always loved so much, still loves you back. This is for you.”

She beat out her co-star Scarlett Johansson, for her role in “Jojo Rabbit”, as well as Florence Pugh (“Little Women”) and twice-nominated Margot Robbie (“Bombshell” and “Once Upon a Time in Hollywood”).

The British Academy of Film and Television Arts, in its 73rd annual movie awards, are often seen as indicative of which way the Oscars might go in Los Angeles, this year on Feb. 9.

This year’s Baftas have faced some criticism for lacking ethnic diversity among the acting categories’ nominees, all 18 of whom were white.

Phoenix took aim at “systemic racism” and “oppression” within the industry in his acceptance speech.

“I think that we send a very clear message to people of color that you’re not welcome here,” he added.

The British academy said it would review its voting system in time for next year’s awards.

The winners and nominees in most categories are voted for by the 6,500 members, who are industry professionals and creatives from around the world.

In previous years, senior Bafta figures said the awards could only reflect the cinema industry’s output.

“It’s infuriating. We can’t make the industry do something; all we can do is encourage,” said Bafta film committee chairman Marc Samuelson.

The ceremony was hosted by TV chat show presenter Graham Norton, with Prince William and his wife Kate adding some royal glamour in his 10th year as Bafta president.

The prince presented the Academy Fellowship, its highest accolade, to American producer Kathleen Kennedy, the boss of Lucasfilm, and behind some of the biggest-grossing movies ever.

They include the Star Wars sequels, “Jurassic Park”, “E. T. the Extra-Terrestrial” and the “Back to the Future” trilogy.

The 55-year-old’s roles include Gollum in “The Lord of the Rings” trilogy, Caesar in the “Planet of the Apes” reboot, the titular gorilla in “King Kong” and Supreme Leader Snoke in two “Star Wars” sequels. JB