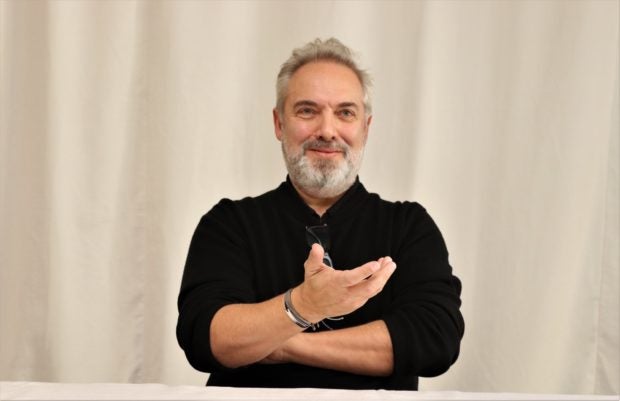 LOS ANGELES—It takes a master filmmaker like Sam Mendes to tell the seemingly simple story of two young British soldiers on a mission to deliver a message at the height of World War I and turn it into one of the finest war films in recent cinema.

Sam’s “1917,” starring two relatively unknown but excellent actors, George MacKay (Lance Corporal Schofield) and Dean-Charles Chapman (Lance Corporal Blake), was screened late in this awards season. But the remarkable film’s thoughtful and visceral depiction of the hellish nature of war makes it a best picture contender and earn a spot in many critics’ year-end top 10 lists.

“1917” is carried by the two young leads, with supporting performances by Benedict Cumberbatch, Richard Madden, Colin Firth and Mark Strong.

George and Dean-Charles are engrossing as they go on a suicide mission across what is referred by Sam as no-man’s land, where they encounter land mines, skeletons, bodies everywhere—floating on rivers or lying in bombed-out craters, and the constant stench of death.

It all came from the memory of Sam listening to his paternal grandfather’s (Alfred Huber Mendes) stories of his experiences as a young soldier in World War I. Sam’s dad, of Portuguese-Creole heritage, is from Trinidad, while his mom is an English Jew.

Born in England, Sam was educated at Cambridge University. He found early success as a director in theater and made his feature debut with “American Beauty,” for which he won Oscar and Golden Globe best director awards.

“My grandfather was a Portuguese-Trinidadian,” he began telling us about his story source inspiration. “His great-grandfather emigrated to Trinidad in the 19th century. He was sent away as a boy to school in England around 1910. Later, he chose to sign up for the war because his friends from school had all gone. He was a very small man, 5’ 4”, [and] ended up being a novelist.

“He was a great storyteller, but for whatever reason, he never told the stories of the war to his own children. He never told the stories of his experiences in the First World War to his sons, but he decided to tell his grandchildren.“By that time, he must have been in his late 70s or early 80s, and we would go to see him in Trinidad. He would sit us down on the porch outside, pour himself a rum and tell us stories. One of the many stories he told us was the fact that he had been tasked with delivering a message many times over. He was very small and he was fast.

“And because in winter, the mist hung at about six feet in No Man’s Land, they would send him because he wasn’t visible above the mist (laughs), which is an incredible story. He got a medal. He captured single-handedly 10 German soldiers. He didn’t mean to, by the way. He was very self-deprecating in telling these stories.

“They were never stories about his own heroism. They were stories about how lucky he was to have survived. But he saw the German soldiers because he could see their bayonets over the top of the mist.

“It was images that he gave me. I watched him. He was a wonderful man and I loved him very much. He used to wash his hands incessantly. I remember asking my dad, ‘Why does grandad wash his hands often?’

“My dad said, ‘Because he remembers the mud of the trenches and never being able to get clean.’ I suppose that stuck with me in a way that is beyond words. Without wanting to be pretentious, there’s a great Sartre (actually by Albert Camus) quote. He said, ‘A man’s work is nothing but this slow trek to rediscover, through the detours of art, those two or three great and simple images in whose presence his heart first opened.’

“I suppose my heart as an 11- or 12-year-old boy opened when my grandfather told me these stories. The film is not specifically his story. There are many fragments of stories that we picked up from research at the Imperial War Museum (London) and other places.

“You kind of marinate in the world of the war stories. Then, you try to find the story that makes sense and has integrity. Like all my favorite war movies and books, the film is a fiction based on a fact. The facts of the story are true, but the characters are invented.”

On why he decided to finally make a film inspired by his grandpa’s stories, the director of “Skyfall,” “Revolutionary Road,” “Road to Perdition” and “Jarhead” replied, “We live in a time when we’ve lost, and I speak for myself in this, what it means to sacrifice and to sacrifice for others. We’re in a self-obsessed culture.

“There’s a generation of people, men and women, who sacrificed everything for something bigger than themselves. They sacrificed it for a free and a unified Europe, which is something that we can do well to remember right now.”

For the grandson who became a noted director, his grandpa conveyed valuable lessons via his stories. “They were all about how frail life is and how lucky we are to have what we have. I suppose the most memorable story he told me was this. They came under enemy shell fire. His best friend, whom he had enlisted with, was struck by a direct hit from a shell and literally disappeared. Those are the things that stay with you.

“They weren’t stories of combat per se. They were about how fragile everything is and how you must hold on to it. They were told to me by an old man who was alive and was talking to a young man, saying, “Grab this life with everything you have. It’s precious and it could be over like that.” You and I are lucky enough to be born in peacetime.” 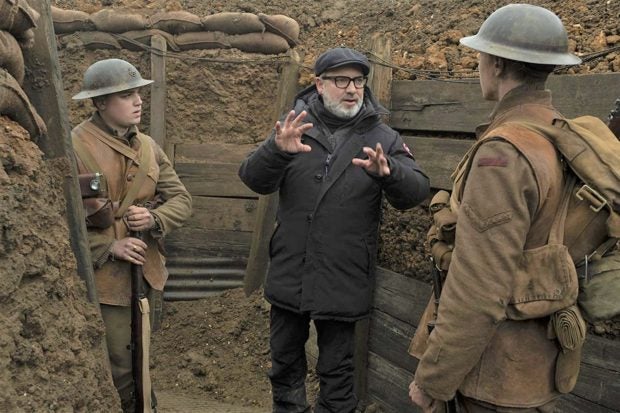 On his specific year for the film’s setting, Sam explained, “I picked 1917 because it was a very specific moment in history when the Germans retreated to the Hindenburg Line and the British were suddenly alone after three years of intense warfare. They weren’t sure whether the Germans had retreated, withdrawn or surrendered, and there was a period of about 72 hours to a week when they were cut adrift in this new landscape that they’d fought over.

“The First World War is in many ways a war of paralysis. People lost their lives over 150 yards of land, going back and forth. Hundreds of thousands of people dead in that stretch of land between the German line and the British line.

“Suddenly there was no one in no-man’s land. The Germans destroyed anything of lasting value. They cut down the trees, destroyed the orchards, killed the cattle, all of those things.”

Sam shared a specific gripping story by his grandpa. “My grandfather told us a story about running through no-man’s land, he fell and found himself lying face-to-face with a very young, as he put it, extremely beautiful man. The man, with his eyes open, stared straight at him.

“When my grandfather got back to the trench, he put the body down. He realized that the man was already dead because he had been shot while he’d been carrying him. Had he not been carrying him, he would have been hit, so he said, that man saved my life and didn’t even know it. How could you forget stories like that when you’re a child? It was pretty intense to my cousins and me.”

He was especially excited to show the film to his three cousins, who sat, absorbed by their grandpa’s tales when they were kids. “There were four of us. I’m very much looking forward to showing this movie to my cousins.”