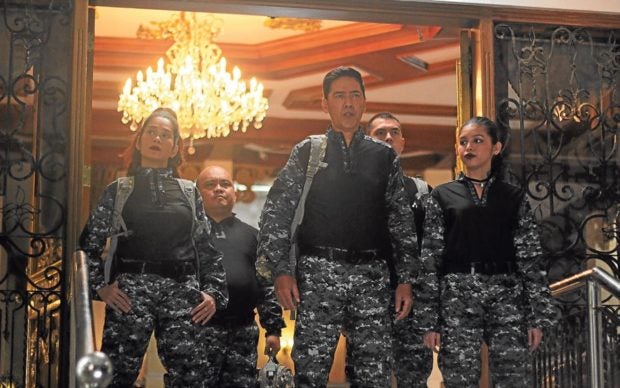 Inspired by the heist genre, this action-comedy movie follows the exploits of Don Robert Fortun (Sotto), a master strategist bent on seizing the famed Pearl of the Orient—the largest of such mineral in the world—from his conniving brother, Benjie Fortun (Manalo). In the process, he hopes to take back what he thinks is rightfully his, and vindicate his name from a heinous crime that he didn’t commit. “He will be relentless in his quest of truth and justice,” Sotto said.

To help him execute his plans, he assembles a motley crew of experts, or “The Dons,” which is composed of mysterious computer hacker Donna (Mendoza), magician Zulueta (Pokwang), wrestler Johnson (Cuenca) and car racer Kikong (Bay).

“For the first time, Maine and I aren’t playing father and daughter roles. In fact, without giving away anything, our characters are at odds with each other. So, that’s interesting for us. Also, Jose isn’t my sidekick this time around,” Sotto related, adding that topping the box-office ranking is no longer his goal at this point in his career. “I just want to make movies. And my Christmas wouldn’t be complete without the MMFF. It’s in my blood,” he said. —ALLAN POLICARPIO INQ