After ‘Hustlers’ and turning 50, Jennifer Lopez takes on Super Bowl 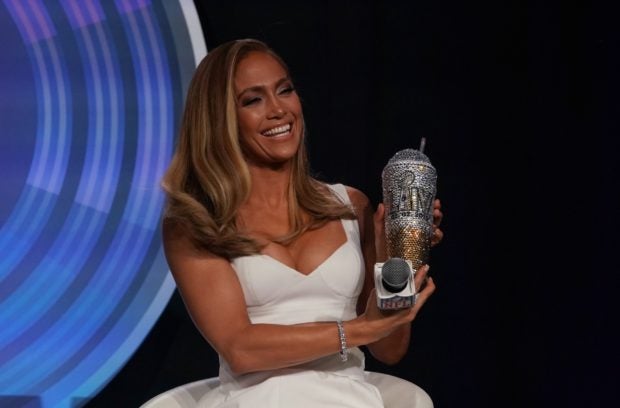 Pepsi Super Bowl LIV Halftime Show performers Jennifer Lopez holds a blinged up water bottle as she and Shakira (out of frame) hold a press conference at the Hilton Miami Downtown Jan. 30, 2020, in Miami.  Image: AFP/Timothy A. Clary

It has been a pretty big year for Jennifer Lopez.

She turned 50, went on tour, earned rave reviews for her turn as a shrewd stripper in “Hustlers,” judged a new season of “World of Dance” and got engaged to retired baseball star Alex Rodriguez.

And on Sunday, she will take on the Super Bowl halftime show, one of the most-watched half-hours in American television, with Colombian singer Shakira.

Lopez literally does it all—”Jenny from the Block” is an actress, singer, dancer, producer and businesswoman. And she says she is finally used to “being the boss.”

“Nobody in my family was really the boss of anything. We all had bosses,” she told entertainment industry magazine Variety in an interview last year.

“But I guess in the past few years, I’ve come into my own in believing in myself and giving myself credit, knowing that ‘OK, you’re running the ship.'”

Lopez was born in July 1969 in New York’s Bronx borough to a security guard father and stay-at-home mom (later a schoolteacher) from Puerto Rico.

After taking singing and dancing lessons in her youth, Lopez was cast in the 1986 film “My Little Girl,” and she caught the showbiz bug.

Her big break came a few years later when she was hired as a Fly Girl dancer on the popular television variety show “In Living Color.” That led to dance work with Janet Jackson, and a few small-screen roles.

But Lopez’s huge break came in 1997 when she was cast as slain Mexican-American singer Selena in the film of the same name.

She was chosen from more than 22,000 actresses for the role and became the first Latina actress to earn $1 million in Hollywood—a salary that she says set a precedent and helped blaze a trail.

“Maybe 30 years ago, it was very ‘Oh, you’re the Latin girl. You’ll do Spanish roles — you’ll play maids, you’ll only be limited to this little box,'” she told Variety.

“It’s about getting people in the business… to believe this girl can do more.”

The year after “Selena” hit theaters, she starred opposite George Clooney in the thriller “Out of Sight”—a role that for many critics showed she had acting bona fides.

A pop star was born.

Her parents thought acting was a dead-end for Latinas. Her agents kept insisting that she choose between singing and acting. Lopez refused and the rest is history.

JLo, as she is more or less universally known, has sold tens of millions of albums worldwide, including more than 10 million in the United States alone. Concerts on her last tour were nearly all sold out.

Her acting career has run the gamut, from the mega-flop “Gigli” with former beau Ben Affleck to her acclaimed performance as Ramona in “Hustlers,” a film she also produced.

She earned a Golden Globe nomination for the role, which featured an athletic pole dance that left tongues wagging—and many thought she should have won an Oscar nod.

Lopez’s personal life has kept her in the headlines, even when her acting and music careers have been relatively quiet, especially her relationship with Affleck, which sparked the term “Bennifer.”

But her three marriages so far, including to singer Marc Anthony, have ended in divorce. After she gave birth to twins Max and Emme in 2008, jobs were few and far between.

Then came what Lopez calls her career’s second act—her decision in 2011 to join the reality competition show “American Idol” as a judge.

“You can’t hide on reality TV,” she told Variety. “And they got to see I was a real, caring person who was actually nice.”

She recorded songs with Pitbull and Cardi B. She starred in the television police drama “Shades of Blue.” And then came “Hustlers.”

Last year, she even walked the catwalk for Versace, in a reimagining of a classic barely-there dress she wore 20 years ago to the Grammys.

With Rodriguez, now a sports broadcaster after a long career in baseball, Lopez says she has found harmony between her professional and personal lives.

Her next act after the Super Bowl?

She is mulling a turn at directing—still rather a rarity for women in Tinseltown. The project is drug lord drama “The Godmother,” in which she also is set to star.  CL /ra

Jennifer Lopez hints at collaboration with Shakira for 2020 Super Bowl