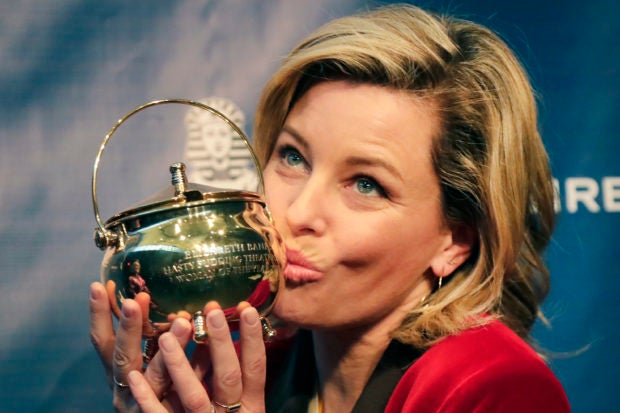 Actor and director Elizabeth Banks kisses the Hasty Pudding Pot after being honored as the 2020 Woman of the Year by Harvard University’s Hasty Pudding Theatricals, Friday, Jan. 31, 2020, in Cambridge, Massachusetts.  Image: AP/Elise Amendola

Actor and director Elizabeth Banks was honored Friday as Woman of the Year by Harvard University’s famed Hasty Pudding theater troupe with a parade and a celebratory roast.

The “Hunger Games” star rolled through Harvard Square in the back of a black convertible as students dressed in drag and other elaborate costumes danced through the streets of Cambridge, Massachusetts.

At the roast, troupe members cracked jokes about last year’s reboot of “Charlie’s Angels,” which Banks produced, wrote, directed and appeared in, as well as her roles in the popular “Hunger Games” and “Pitch Perfect” franchises.

Banks was then bestowed the award of the evening—a golden pudding pot—and caught a preview of the troupe’s latest show, “Mean Ghouls.”

“This has been a very unique experience,” Banks said after being handed her award onstage. “Thanks for this exceedingly fun retrospective of my career.”

She also threw some friendly barbs back at the troupe, which has made strides in recent years to better represent women in its productions.

Last year was the first in which the troupe, considered the nation’s oldest collegiate theatrical organization, allowed women in the cast. Organizers said this year’s performance also boasts a majority female cast, a female writer and female producers.

“Hasty Pudding is one of those truly progressive institutions,” Banks said. “You know it was founded, and then a mere 175 years later let ladies into the party.” 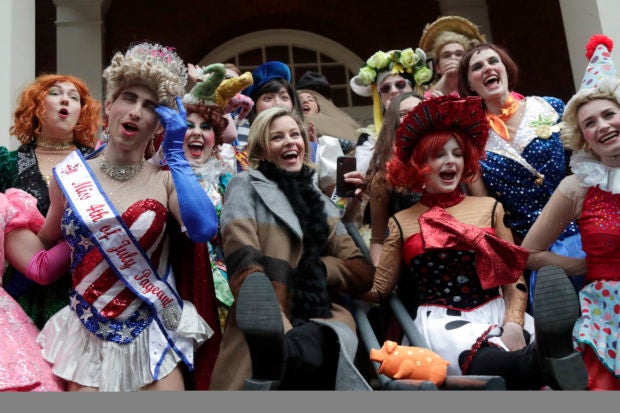 Banks, who grew up in Pittsfield, Massachusetts, said after the roast that the day had been a family affair, with her father, cousins and other family in Massachusetts coming out.

Her husband, in particular, enjoyed seeing her get roasted for a change after long being the target of her jokes, she said.

The University of Pennsylvania graduate also reminisced about her first paid acting gig, which was as a reenactor on the true-crime show “America’s Most Wanted.” Banks said she played a victim hit by a car.

“Still one of the greatest things I’ve been a part of,” she joked.

Banks also said she was excited about her most recent project, the upcoming FX miniseries “Mrs. America,” which is about efforts to pass the Equal Rights Amendment to the Constitution and stars Cate Blanchett, Uzo Aduba and Sarah Paulson, among others.

“It’s one of the finest casts I’ve ever been a part of,” she said. “My excitement level right now is getting to go to work with people I admire.”

Hasty Pudding says it picked Banks because she is a role model for women in Hollywood as a director, producer and writer. The 45-year-old has also received three Emmy nominations for roles on the television shows “Modern Family” and “30 Rock.”

The troupe has bestowed the Woman of the Year award since 1951. Previous winners include Ella Fitzgerald, Meryl Streep and Halle Berry.

This year’s Man of the Year has not yet been announced. CL /ra