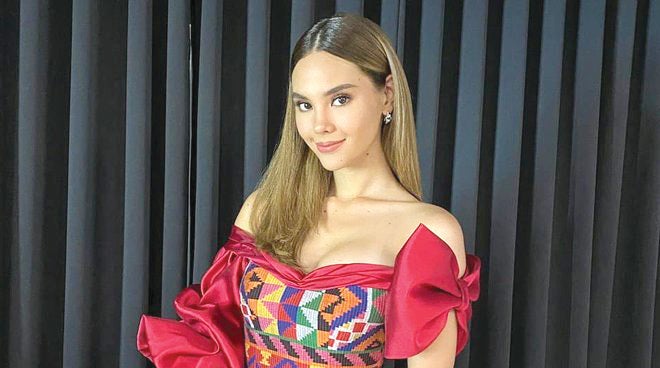 Miss Universe 2018 Catriona Gray said that aside from advocating for education and HIV/AIDS awareness, she has made it her personal goal “to promote a sense of burning pride for our country to the new generation.”

Catriona is this year’s arts ambassador of the National Commission for Culture and the Arts (NCCA). On Tuesday morning, Catriona, as well as music ambassadors Julie Anne San Jose and KZ Tandingan, were introduced to the media. The event coincided with the formal introduction of Arsenio “Nick” Lizaso as the agency’s new chair and the announcement of NCCA’s plans for February, which is the National Arts Month (NAM).

“In my pursuit to conquer the universe … I’ve always wanted to showcase the beauty and intricate uniqueness of the Philippines to the universe, whether it be through our heritage, art, history, textile or dance. In doing so, I felt that as ambassador, I was able to play my part in having the new generation take notice and start to appreciate what the Philippines has to offer,” Catriona said in a speech during the launch.

Catriona has a master certificate in music theory from the Berklee College of Music in Boston, Massachusetts.

“My love for our arts and culture was not something that I was born with due to my mixed heritage. It was something that was grown, learned and embodied,” the Filipino-Australian beauty queen said. “This year’s theme is ‘ani ng sining.’ To harvest starts in planting and sowing the seeds. I have fervent hope that we can instill and grow a fierce love and passion for Philippine arts and culture in each of us.”

Julie Anne, meanwhile, said she was thrilled to be given the opportunity to tell her stories of triumph and share her music, especially to the youth. “Being an ambassador has encouraged me more to help others and inspire them to pursue their dreams. I feel proud to be Pinoy,” the GMA 7 artist said, adding that she intended to use her influence on social media to promote the different causes of the NCCA.

For her part, KZ said she was thankful for being the agency’s music ambassador for two straight years now. “I’m excited to continue what the NCCA and I have begun in 2019. I’m impressed with its programs, all aimed at exposing the youth to arts and culture,” she declared.

Singer-songwriter Lara Maigue performed the opening number at the NAM 2020 launch and press conference. Julie Anne sang her version of the ballad “Nobela,” and KZ, her original “Nag-iisa Na Naman.”

The Halili-Cruz Dance Company showed its interpretation of the “Tala” dance craze, while ventriloquist Ony Carcamo performed with his piglet puppet, Sampaguita.