I love Manila. This is one of my favorite cities in the world. I have seen fans from other countries but not as passionate as this. This is unbelievable.” Those were the words of Kobe Bryant.

Now it’s our turn to say, “It’s unbelievable,” as we reel from the shock of Kobe and his daughter Gianna’s tragic demise. Up to his last moment on earth, the LA Lakers icon was an MVP (Most Valuable Papa).

In our basketball-crazy country, Black Mamba (Kobe’s moniker) is worshiped like a demigod. The NBA superstar endeared himself all the more to Pinoy fans during his seven trips to Manila. Some PBA players even had a once-in-a-lifetime chance to play ball with Kobe.

All professional cagers are in a state of mourning. Even if they were not close friends of Kobe, their common love for basketball makes them seem like brothers somehow. When the 45th season of the Philippine Basketball Association (PBA) kicks off on March 1, there will definitely be a tribute for KB. His initials could very well stand for King of Basketball. Even if it’s “game over” for Black Mamba, he has already dribbled his way into our hearts. Kobe will never foul out from our memory. 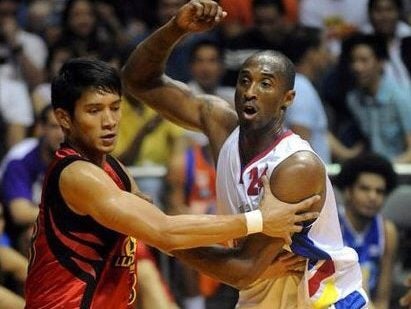 JAMES YAP: It was a dream come true to “guard” Kobe during an exhibition game with other PBA players. I had to control my being starstruck, so I could focus on the game. It felt surreal when I was able to shoot while Kobe was guarding me. He’s intimidating on the court, but he’s so accommodating off the court.

CHRIS ROSS: I wasn’t able to meet Kobe, but I literally sat right in front of him and was too starstruck to turn around and ask him for a picture. As a player, the biggest thing I took from him was his work ethic. If he had a weakness in his game, he would work tirelessly on making that weakness a strength. I’m sure no one in the NBA worked harder than Kobe did.

BENJIE PARAS: He’s a player with a strong personality that made him a good leader. He doesn’t back down to anyone. He challenged his teammates every practice to perform better during the game. I saw him play in 1996 when he was still a rookie. I got so impressed with Kobe’s basketball wizardry, so when my son was born in 1997, I named him Kobe. No wonder he’s so into basketball. Aside from continuing my legacy, my son is also trying to live up to the basketball standards of his “namesake.”

ATOY CO: I admire Kobe because of his right attitude and perseverance. As a coach, I always use him as an example to motivate my players.

JV MOCON: I learned a lot from the way Kobe played, his work ethic, his mentality towards the game and life, as well. He inspires me to give my all. It doesn’t matter what the result will be, as long as I do it with passion.

BASER AMER: Kobe’s aura and presence when he stepped into the court was an indescribable experience. I had the rare chance to be with Kobe on the court. He was coaching the other team.

More than the lessons in basketball, the main lesson I got from Kobe is that, no matter what, family comes first.

CHICO LANETE: I could watch Kobe’s dazzling moves all day. His leadership skills, trust in his teammates, the way he can turn any situation around to win a game, and his buzzer-beaters are the stuff that cagers’ dreams are made of.

ROBERT BOLICK: I wish I could hug Kobe so tight and let him know that players like me made it to the PBA because of the inspiration he gave us. His mentality of winning, and his attitude towards the game is unbelievable. Every player wants to imbibe that. Kobe showed us that if you want to win, you have to outwork everyone.