Pastor’s fight against KKK becomes movie that may aid battle 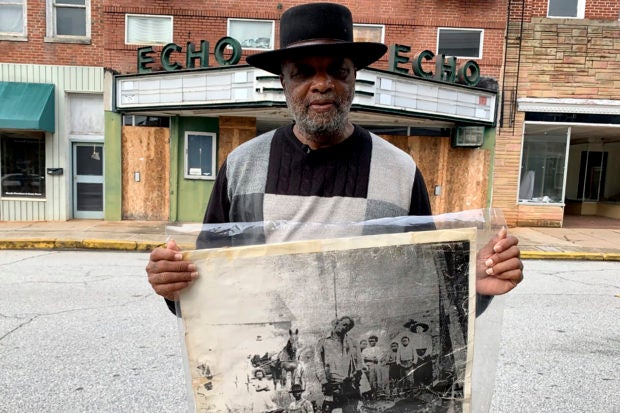 Not many years ago in a small, rural South Carolina town stood The Redneck Shop — a racist emporium and Ku Klux Klan (KKK) museum housed in an old theater, where white supremacist neo-Nazis gave heil-Hitler salutes and flaunted swastikas and Rebel flags.

That building, once the property of the Klan, now belongs to a black preacher and committed foe of racism who fought the group for more than 20 years. The Rev. David Kennedy plans to transform it into a shrine of reconciliation.

How Kennedy, whose great-great-uncle was lynched in the community, got ownership of the old Echo Theater building from an ex-Klansman — a man who once contemplated murdering Kennedy — is the subject of a movie that could end up raising funds for that transformation.

“It symbolizes right now in the shape it’s in — hatred,” Kennedy said. “But we hope we can turn it into a building of love.”

A decade ago, the white supremacist store in Laurens was a place where one of the few shirts sold without an overt racial slur said, “If I had known this was going to happen I would have picked my own cotton.” The World Famous Ku Klux Klan Museum with its racist meeting place was in the back.

The KKK had put the title in the name of a trusted member, Michael Burden. Burden says other Klan members once suggested that he kill Kennedy, and he considered it. Kennedy did not know that when he saw Burden, hungry, poor and full of hate, and took him to a buffet to fill his stomach, then to a hotel so his family would not have to sleep on the street.

Burden’s girlfriend at the time kept urging him to leave the Klan and in 1997, he did. He also bestowed ownership of the old theater building upon Kennedy for $1,000 (over P50,000).

But there was a twist. Under the agreement, John Howard, who owned The Redneck Shop, would be allowed to stay and run his store as long as he lived.

Howard abandoned the store years ago, ignoring maintenance. Ductwork and piping were ripped from the walls. He died in 2017, giving Kennedy complete control over the building.

Kennedy estimates it needs at least $500,000 (P25.4 million) in repairs that must be done carefully because of the theater’s age and historic location. That seems impossible for the minister whose New Beginning Missionary Baptist Church congregation meets in a converted gun store several miles west of Laurens.

But a movie may provide a Hollywood ending.

The story of the unlikely friendship between Kennedy and Burden has been made into a film called “Burden”, scheduled for national release Feb. 28. Starring actor Forest Whitaker as Kennedy, it was shown at the 2018 Sundance Film Festival.

101 Studios, which produced it, has promised Kennedy it’ll help repair and reopen the theater.

“The South cannot rid itself of its past. But we could rid ourselves of the Redneck Shop,” Kennedy said.

The studio is getting companies to donate materials and time and is selling commemorative bricks that can be placed at the theater.

The movie’s director, Andrew Heckler, first entered The Redneck Shop in the late 1990s after reading a short article about Kennedy’s fight. He knew it had to be a movie and finished the screenplay in 2001, finally getting the green light from 101 Studios to make the film a few years ago.

“I knew this story would mean something to people. Three people in the middle of nowhere South Carolina did something that would be meaningful to all people,” Heckler said. “There is a pathway for fighting hate. It’s not easy. It’s love, faith and not giving up.”

Kennedy knows about not giving up. He protested when a South Carolina county refused to observe the Martin Luther King Jr. holiday, and he helped lobby to remove the Confederate flag from the Statehouse dome. In his church office, he keeps a poster-size photo of a lynched black man swinging at the end of a rope. It is his great uncle, killed more than 100 years ago by a white mob in Laurens County.

Kennedy also has a photo of white people about 15 years ago in the back of the theater, wearing uniforms with a Nazi swastika and raising their arms and hands in a white power salute.

“Racism is a strange kind of organism. It is systemic. And it probably will not go away in our lifetimes,” Kennedy said.

Burden and Kennedy remain friends, though not as close as they once were. Burden got married, turned his life around and now drives a truck across the country.

“When I changed my lifestyle I buried that guy,” Burden said of his racist past.

Burden cautiously shares his story with those he thinks need to know that change is possible.

The movie named after him is a way to do that on a larger scale.

“I’m willing to go through this again,” Burden said. “Am I happy about it? Some days yes, some days no.”

Kennedy recently gave a tour of the theater to a few visiting reporters. Through the soft winter afternoon sunlight, faded two-story paintings of Nazi and United States flags can still be seen on a wall. A Confederate flag remains on the theater marquee.

The images are deteriorating, but they linger.

“Racism and hatred, they are both destructive and they have no future,” Kennedy said. “But love, forgiveness and mercy will always have a future because they are constructive.” CL/NVG

Jackie Forster laments ‘racism’ against family in US