‘Minari,’ a Korean immigrant drama, breaks out at Sundance 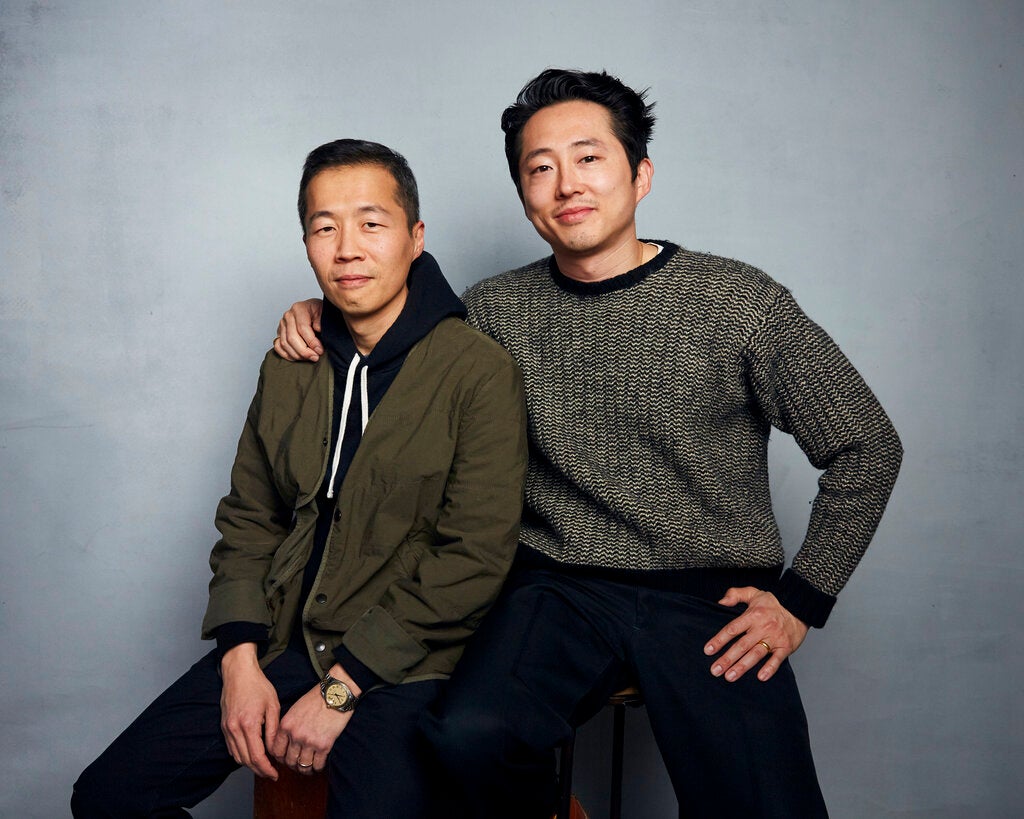 Director Lee Isaac Chung, left, and Steven Yeun pose for a portrait to promote the film “Minari” at the Music Lodge during the Sundance Film Festival on Monday in Park City, Utah. (Invision/AP)

PARK CITY, Utah — After the premiere of “Minari” at the Sundance Film Festival, while many in the audience were still drying their eyes, director Lee Isaac Chung quoted the author Willa Cather to explain how he had come to write a film based on his childhood, when his Korean family moved to rural Arkansas.

“Life began for me when I ceased to admire and began to remember.”

Chung’s memories, he said, started pouring out of him. A family drama began to form for the 41-year-old filmmaker about his upbringing in Arkansas. About his parent’s struggle as immigrants in a strange new land. About his father’s hard-fought attempts to start a small farm. About his tender but comic relationship with his grandmother.

“I wanted to shape the narrative to have different pockets of how this family might not make it, might not survive,” Chung said in an interview the morning after the film’s premiere in Park City. “Those were the tensions I was playing with. Each family member kind of has their turn, their shot at growth and maturation. It wasn’t a traditional narrative of one hero but more: How do I make the whole family the hero?”

“Minari” has been an unquestionable high point to this year’s Sundance, a breakout critical hit that with exquisite tenderness and simple beauty brings to life a classic immigrant tale and a compassionate family drama. The film, an American production with dialogue mostly in Korean, has some heavyweight backers. It was produced by Plan B Productions (Brad Pitt is an executive producer), and independent distributor A24 is releasing it later this year.

While low in budget, “Minari” is the kind of non-English film — personal, authentic — that might have once stood little chance of getting made. But independent filmmakers and labels like Neon and A24 have been pushing those boundaries, and movies like “The Farewell” and “Parasite” have proven there’s a wide American audience for them.

Steven Yeun, the Korean-born actor who plays the father in “Minari,” has been working to great acclaim on both sides of the Pacific. The “Walking Dead” actor won best supporting actor from numerous critics groups for 2018’s exceptional Korean mystery drama “Burning.” He was the first to sign on “Minari.”

“Sometimes identity become a focal point of how to approach the other or a difference in how we see Americans,” said Yeun, sitting alongside his director. “I’ve read many scripts about families of immigrants. A lot of the time, they’re explanatory or they’re catering to an audience that’s not even of themselves. When it does that, it loses its authenticity and romanticizes in some ways, idealizes in other ways. When I read the script, I was like: This is unabashedly a truthful telling of these human beings.”

Chung, who was born in Denver and whose four previous films include his Rwanda-set debut “Munyurangabo,” specifically credited Plan B producer Christina Oh for wanting to keep “Minari” true to Chung’s experience.

“She was always clear: Let’s make this as Korean as possible,” Chung said. “At the same time, it’s a low-budget film so we were allowed to take a risk that I don’t big-budget films would have been allowed to.”

Chung’s parents were at the premiere of “Minari,” as were Yeun’s, making for a very emotional evening. Chung called it cathartic for him and his parents. “They feel like I understand what they went through,” he said. “I’ve noticed a shift in the way we talk to each other.”

Yeun described a similar journey in playing the father, Jacob.

“At times I warred with playing him in a cliche so we could cater to a larger message, or playing him a very specific, individual way. Obviously, the right choice is as an individual. But it was humbling to know I had to go through that journey to see my dad truly,” Yeun said. “Sitting next to my dad, everyone was crying after the movie but as I was getting up, I just put my hand on him. And then it was over.”