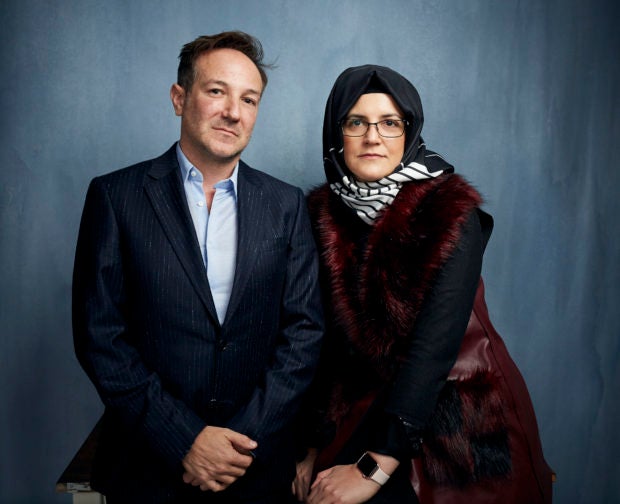 A searing documentary about the killing of Washington Post columnist Jamal Khashoggi made its anticipated debut at the Sundance Film Festival, unveiling a detailed investigation into the Saudi Arabia regime and the companies and governments that do business with it.

Bryan Fogel’s “The Dissident” was one of the most high-profile documentaries at the Park City festival, and it made headlines even before it premiered Friday. The film, Fogel’s first since his Oscar-winning expose “Icarus” on Russian doping for the Olympics, features the explosive conclusion of United Nations human rights investigators that the phone of Amazon billionaire Jeff Bezos was hacked into by a malicious file sent from the personal WhatsApp account of Saudi Crown Prince Mohammed bin Salman.

Hillary Clinton and Alec Baldwin were among those in attendance at the premiere of “The Dissident”, as was Hatice Cengiz, the fiancée of Khashoggi. Khashoggi was picking up paperwork for their marriage when he was murdered at a Saudi consulate in Istanbul in October 2018. The crown prince ordered the killing, the CIA has said. Mohammed, who initially denied Saudi Arabia was behind Khashoggi’s killing, eventually granted it was carried out by the Saudi government but claimed it was not by his orders.

In an interview following the premiere, Fogel said he hopes “The Dissident”, which dramatically details the plot to kill Khashoggi and analyzes Saudi Arabia’s crackdown on free speech, forces a reappraisal of the Middle Eastern country internationally. The film’s end credits include a list of corporations with business ties to Saudi Arabia. The United States, too, is scrutinized for its close alliance with the kingdom, including a 2019 arms deal allowed to go forward after President Donald Trump vetoed a bill intended to block the sale.

“I hope that this film will make other countries, their government and business leaders reassess their relationship with Saudi Arabia until they reform,” said Fogel. “As much money as there is, when you have people sitting in prisons for tweeting, when you have women arrested and tortured for driving, it’s very hard to look the other way.”

“The Dissident” was greeted with a raucous standing ovation and immediate acclaim. Variety called it “an eye-opening thriller brew of corruption, cover-up and real-world courage.”

Independently financed by the Human Rights Foundation, “The Dissident” is for sale at Sundance, the top movie market for documentaries. Speaking on stage after the premiere, Fogel urged distributors to not be scared off by Saudi Arabia and give the film a worldwide release. “In my dream of dreams, distributors will stand up to Saudi Arabia,” said Fogel.

Media companies have capitulated to Saudi pressure before. Netflix, which distributed Fogel’s “Icarus”, last year removed an episode of Hasan Minhaj’s “Patriot Act” dealing with the killing of Khashoggi after a Saudi complaint. Fogel said he would be happy for any studio to pick up the film, including Netflix, HBO and Bezo’s own Amazon. Following the murder, relations between Amazon and Saudi Arabia cooled considerably.

Of the possibility of Amazon, Fogel said, “I hope so. I’m open to any global powerful distributor that’s going to take this film seriously.”

The premiere of “The Dissident” was especially emotional for Cengiz. Since Khashoggi’s death, she has taken on public role pressing for justice for her former fiancé.

“I’m happy because this film will keep alive the story,” Cengiz said in a separate interview. “This film helped me to continue this fighting as a human, as a woman, as a victim.”

After the killing of Khashoggi, a veteran Saudi journalist who fled the kingdom to urge for reforms and press freedom in his native country, Cengiz says she can no longer assume her safety. The Guardian on Friday reported that U.S. officials believed Saudi Arabia has previously attempted to monitor Cengiz abroad.

“No one knows who is safe because they killed Jamal inside the consulate, the best safety place around the world,” said Cengiz. “So I don’t know if I’m safe if I’m sitting in my home.”

“The Dissident” includes extensive interviews with Turkish officials who uncovered the killing and also delves into the related story of Omar Abdulaziz, a Saudi activist who is living under asylum in Montreal after fleeing the country to launch a web series critical of the Saudi regime.

In the film, Abdulaziz says he believes Khashoggi’s relationship with him led directly to his murder. Abdulaziz’s phone, too, was hacked, the film alleges, with the powerful spyware program Pegasus believed to be used to target Bezos.

For Fogel, bringing such revelations to light has given Khashoggi’s death more meaning.

“There’s so much pain from this story, but there’s a lot of power that has come from it,” said Fogel. “Look what his murder — as horrendous as it was — has done to shine the light on other human rights abuses, to shine the light on what the Saudis were doing in regards to repressing free speech. I hope if Jamal was looking down, he’d be very proud to see he didn’t die in vain.” RGA