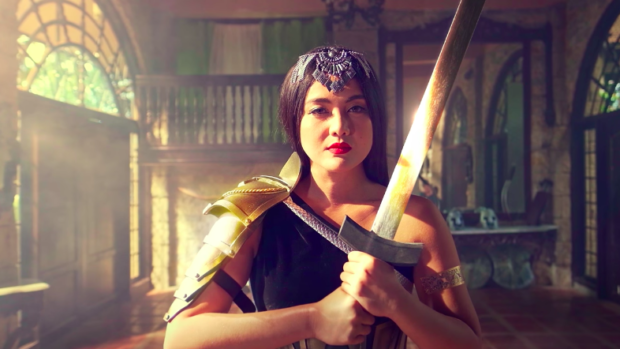 TV drama series “Kadenang Guinto” is facing its last two weeks. To mark this, its main stars donned gladiator attires for the much-awaited “The Battle of the Dragons.”

The noontime series follows the complex story of Romina Andrada-Mondragon, played by Beauty Gonzalez, and her daughter-in-law and rival, Daniela Mondragon, played by Dimples Romana. Their families are intertwined by blood and circumstances, as Romina married Daniela’s father, while Daniela married Romina’s former fiancé.

Their daughters Cassie (played by Francine Diaz) and Marga (played by Andrea Brilliantes), respectively, also turned into rivals due to their mothers’ hostilities, aside from having their own clashes in school and in love.

“Kadenang Guinto” stars geared up with weapons and armors for their final face-off, as seen on Dreamscape Entertainment’s video on Facebook last Friday, Jan. 24.

Romina held a circular golden shield and a silver sword while gleaming in white and gold attire. Daniela, meanwhile, sported a shoulder armor and a silver headpiece. She looked fierce on her one-shoulder black gown with a golden belt accent.

Cassie and Marga mirrored their mothers’ costumes. Cassie wore a v-shaped leaf headdress and the same black dress as her mother, while Cassie held a wooden arrow, donning a white dress.

Daniela and Romina each rode litters carried by men. The two women held their weapons up and clawed at each other, while their daughters were beside them.

Kadenang Ginto: The Battle of the Dragons

Actress Dimples Romana could not seem to get enough of her look for the finale’s trailer, as seen on her Instagram post last Friday, Jan. 24. The actress also expressed her excitement due to the public’s support for the show.

“[S]porting a gladiator look for our finale promo plug,” Romana said. “[I] can’t wait to see all the [ARTWORK] and IMPERSONATIONS.”

Meanwhile, Kadenang Ginto has been adapted in Indonesia this month, under a remake entitled “Putri Mahkota” (Crown Princess). JB