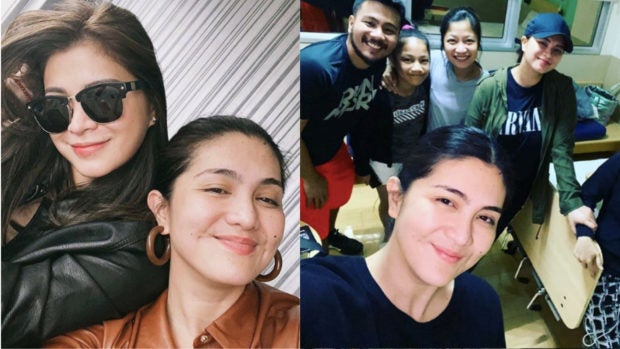 “Kadenang Ginto” star Dimples Romana showed her appreciation for her best friend and fellow actress Angel Locsin, for giving all-out support to Romana’s family while they faced difficult times due to the hospitalization of Romana’s husband.

Boyet Ahmee, Romana’s spouse, has been in and out of the hospital this December after a recent throat operation. Locsin was apparently performing her “ninang duties” (godmother duties) by taking care of Romana’s son Alonzo Romeo Jose.

Romana expressed her love for Locsin on Instagram yesterday, Dec. 17.

“With everything @boyetahmee and I have been going through lately, Boyet being in the hospital in and out, my Kg [“Kadenang Ginto”] tapings everyday (because it’s almost the holiday break) I am grateful for friendships that go beyond work shoots, lunches, dinners and all,” Romana said.

Locsin watched over Romana’s child and played with him while Romana was busy doing “wifey duties” and taking care of her husband’s hospitalization.

Romana also called Locsin their very own “Darna”. Locsin, who formerly played the superhero in a TV series, accompanied Romana’s family to the hospital recently while Romana was still taping for her TV drama series.

(Thank you for making time for us, and for pulling me up in times that I get weak.) JB

Dimples Romana hopeful amid hubby being rushed to ER again

Read Next
‘The Budgetarian’: Enchong Dee on launching podcast about financial literacy
EDITORS' PICK
Unleash the photographer in you this World Photography Day with vivo smartphones
Look Through: The fate of impounded stray dogs
DOH says COVID-19 cases plateauing, but public shouldn’t be ‘complacent’
What to watch out for when selecting a video surveillance solution
23,000 cops to be deployed nationwide for school reopening
House energy committee chair Arroyo bats for cheap electricity
MOST READ
Sharon Cuneta asks for prayers for friend in ICU who suffered silent stroke
Light therapy could be the answer to your sleep problems
Korina Sanchez reunites with former ABS-CBN co-anchors Julius Babao, Cheryl Cosim
PBA: San Miguel ousts Meralco to arrange finals duel vs TNT
Don't miss out on the latest news and information.