Dimples Romana hopeful amid hubby being rushed to ER again 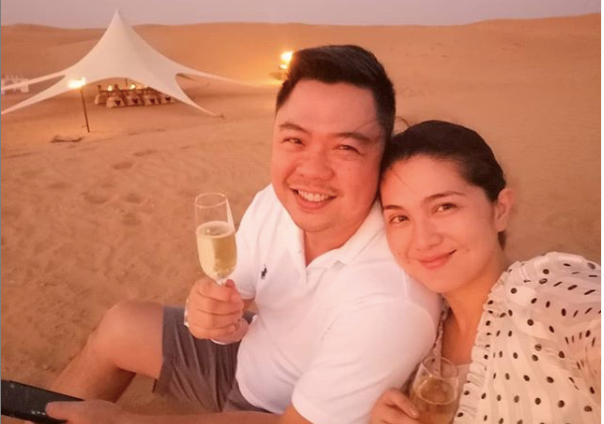 In just a little over a week, actress Dimples Romana’s husband Boyet Ahmee had been rushed to the hospital once more because he was “spitting up blood again.”

Romana said she was in a taping around midnight yesterday, Dec. 15, when she was informed by her daughter Callie that her father was coughing up blood, as stated in Dimples’ Instagram post yesterday.

“Missing out 2 parties for my KG (Kadenang Ginto) family and Swak na Swak family tonight,” the actress said. “At 12mn kanina habang nasa taping ako in Qc (earlier when I was at a taping in Quezon City) for KG, I received a text message from @callieahmee na I should check on my hubby because she saw him spitting blood again. She was crying and I got so worried.”

“And after that tough time we had a week ago, we were all nervous to go through it again,” she added.

Ahmee was first rushed to the emergency room on Dec. 4, for also coughing up and spitting blood following a throat operation. Romana did not specify the reason for Ahmee’s surgery.

The actress, who plays the antagonist Daniela Mondragon in the television series Kadenang Ginto, thanked her workmates “for all the love and support all throughout this whole trying journey the past weeks.”

“Told my bosses in KG right away and they were all very gracious and concerned and told me naman to leave if I really have to dahil para sa aming lahat — family first (because for all of us — family first),” she said. “But I decided to stay and finish the last few scenes and called my brother to take my husband to the hospital instead.”

Romana said she is thankful that he has people who help her out and make her feel secure despite the situation.

“Mangyari man ulit, Hindi na ako mag-iisa (If it ever happens again, I know I am not alone),” she stated.

Romana also expressed her gratitude for her friend, fellow actress Angel Locsin for visiting them at the hospital, who apparently even gave Ahmee’s feet a massage.

(And to our Darna, Angel Locsin, you flew all the way to The Medical City. Thank you for the love I can count on forever. I heard you even massaged Boyet’s feet, I can just imagine how embarrassed he must have been.)

(Thank you for making time for us, and for pulling me up in times that I get weak. For spending time with my family while I am still away, for taking care of everything whenever I am too exhausted from taping, for insisting that I eat right, for playing with Alonzo when I am doing something else, and for supporting us without hesitation, thank you. We love you very much.)

Romana is also grateful to the hospital staff as Ahmee is now in stable condition and already recovering from yesterday’s incident.

(This challenge must have thought it could get to me. Hey, you are nothing against my God! We got this my love, Boyet.) JB

‘Forever your fan and anak’: Dimples Romana thanks Cherie Gil for guiding her in acting career