Hugh Grant, turning 60 this year, on ‘trying to be a young father in an old man’s body’ (Conclusion) 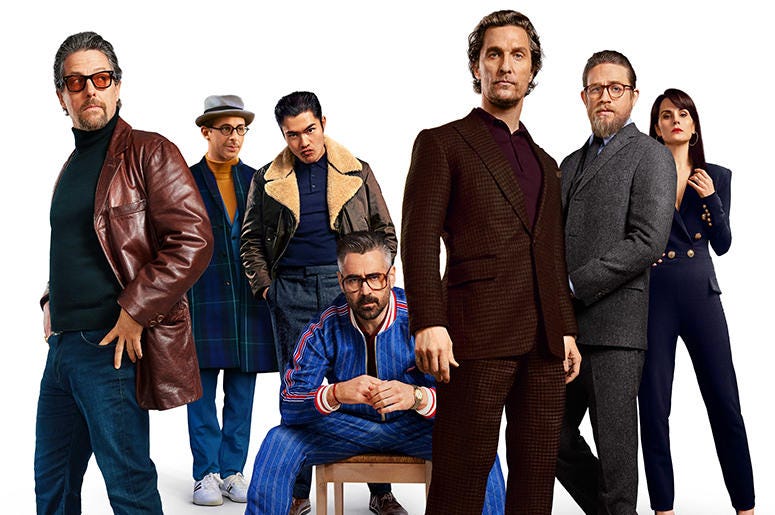 Hugh Grant (left) and the cast of “The Gentlemen”

LOS ANGELES—With his humor, Hugh Grant must be a fun dad to his five young children. Although the British actor, in his typical self-deprecating wit, said in our interview, “… When I sing or dance, they cry.”

Excerpts from part two of our chat:

What is your definition of a gentleman? That’s a hard one. I certainly don’t think it has anything to do with a pinstripe suit and a carnation in your buttonhole, good looks though that can be. In my life, one of the things that would define a gentleman is people who pay me back.

Because a surprising number of people borrow money, and that’s it. You never see it again. There are guys who borrowed a few quid off me who really pay me back, and I think that’s cool. I also think a gentleman punches up and not down.

Has money ever seduced you? Oh Christ, yes. Money is lovely, because despite sounding the way I sound, I didn’t grow up rich or privileged at all.

It’s confusing. But that was not my upbringing. So, money has been lovely. It should not be underestimated—not to have to worry about gas bills is massive.One of the few things I’ve learned in life is that if you do something just for the money, it comes back to bite you. Every time I’ve done that, where I thought, oh, I don’t really like this project, but I’d do it for money, it does hurt you in the end.

Your character overstays in Charlie’s character’s house. Have you ever had that experience? Yeah, for sure. I’ve always been that guest without realizing it. I was staying with my brother once and my family and I thought, this is very nice. Then, right about in the middle of the second week, my sister-in-law, after a bottle of rosé, said, “Why did you have to stay so long?” It was devastating.

Your brother didn’t tell you to leave? No, he was deeply embarrassed. But we left and we have never been back.

Have you had that kind of guest in your home? I am so unfriendly; I almost never have guests.

What was the first Guy Ritchie film you saw? I suppose I must have seen “Lock, Stock and Two Smoking Barrels” ages ago. What I admire to this day is that when you think of British films, you think of good scripts, good acting. You don’t necessarily think of stylish filmmaking.

The filmmaking tends to be more on the classical side, whereas the French, Italians, Japanese and Polish are doing more interesting cinematic things visually. But Guy, coming from advertising, is incredibly visual.

How much more fulfilling is it for you now to go from playing light, charming men to darker characters? I don’t know if you’ve ever grilled people like Richard Curtis (writer-director) in one of these [interviews]. He always found it hilarious that the public may have thought that I was that nice guy I played in Richard’s films. He knew very differently, and that’s why he quite enjoyed helping write my “Bridget Jones” character (Daniel Cleaver).

Because that’s never been me, really, in those Richard Curtis films. That was a character performance, because I am not that Mr. Nice Guy.

Since marrying Anna, have you learned Swedish words here and there? Beyond (he speaks some Swedish words)? That means “Watch out for the dog sh*t.” But really, that’s pretty much all you need when you’re walking with a small child in London. I can just about say (speaks Swedish again). My children hate me when I speak Swedish.

Why? It’s like when I sing or dance, they cry. They plead with me to stop.

Are you taking Swedish lessons? No. Of course, the other thing I know are terrible Swedish words, which my wife uses on the tennis court. We have impunity at the very posh Queen’s Club in London. She can get away with it because no one knows what she’s saying. But I have now looked up these words and they’re horrific.

Now that the children have grown a bit, is your fatherhood experience changing, as well? It’s completely knackering, yeah. If you’re 59 and there are five small children in the house, you can’t have a hangover is what I’ve found [out].

But it’s very nice, and sometimes people say to me, “Hang on, you’ve gotten better as an actor in the last six, 10 years. Why?” Sometimes, I think it may be the kids actually because I can do love so well now. It’s touching, isn’t it? It’s a whole new feeling.

Several years ago, you said you were going to quit acting. Oh always, I’ve been saying that for years.

You also said once on BBC Two, “I was bad at school. I was badly behaved and pretentious.” When did you learn to behave better and not be pretentious? I’m not sure the bad behavior has stopped. I love being pretentious, but now I have a wife who has zero tolerance for it.

You also said that when you got the script for “Four Weddings and a Funeral,” you told your agent, “There has to be a mistake. You sent me a good script for once.” Yes. It happened twice. The first time was when they sent me the “Jerry Maguire” script. I read it and went, oh, this is really good. I rang them up and said, “Is this a mistake?” And they said, “Yes, I’m sorry.” I was very sad.

Do you understand the fascination that people around the world have with the royal family, especially with the issue with Prince Harry and Meghan Markle? Yes, of course. I don’t want to get into that. All I will say is that if I were Harry, and my mother had effectively been murdered by the British newspapers, to then watch your wife being taken to pieces by them, I would, like him, be very protective.

Can you talk about “The Undoing,” your coming HBO series? It’s very difficult to say much about it without spoilers.

Did you read the novel, “You Should Have Known,” on which the series is based? I have read enough of the book. Actually, we diverge from the book quite early on and quite drastically. But yeah, Nicole Kidman is a New York shrink living here on the Upper East Side, married to me.

I am a lovely child cancer doctor, and we have a kid who goes to a nice posh prep school here and everything is dreamy. Then, one of the mothers at this posh prep school gets horribly murdered with a hammer blow to the face. And I disappear. That’s the end of episode one. Are you fascinated?

Can you talk about the high quality of television shows these days? It has everything to offer, doesn’t it? I can’t complain. It’s got marvelous writers, the best actors, incredible directors. “The Undoing” is directed by Susanne Bier, whose Danish films I adore. I have just seen a rough cut of “The Undoing,” and it’s astonishing. There’s no way that’s not a film. So, these are all soothing to my innate snobbery about television.