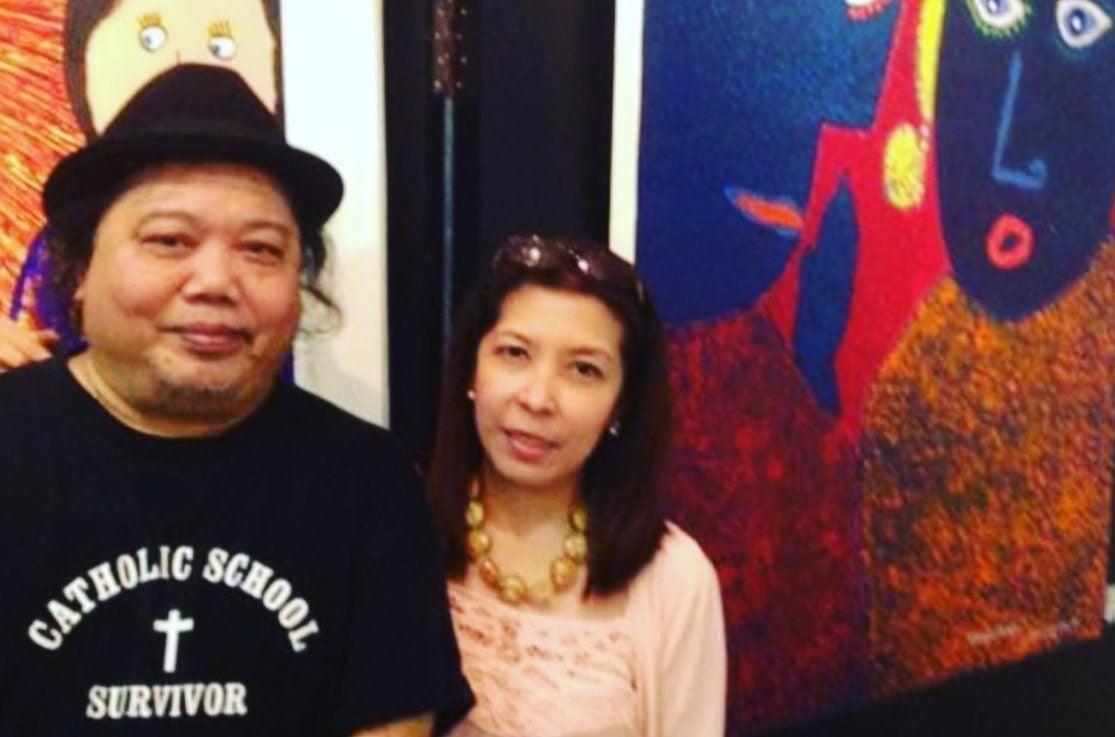 Dennis Garcia (left) with the author

One of Dens’ paintings was his tribute to my mom, Inday Badiday. He named it “Careful, Careful.” That is also the title of his band Hotdog’s song, which my mom used as the theme of her ’80s talk show, “See-True.” (Trivia: Zsa Zsa Padilla did the vocals of that song back in the day). I was so touched by Dennis’ gesture of paying homage to my mom. He also gave me one of his paintings, “Karaoke,” with this dedication: Dear Dolly, To a Vodkanized life.

Thank you for the friendship and the music, Dens. Your contribution to OPM will live on and on. Take a bow for a job well-done and a life well-lived.

Every time I will hear one of your hit songs, “Manila,” I will think of you softly and remember our animated convos while I groove to your timeless music. Bravo, my friend. Rock on in heaven.

As my tribute to a true OPM icon, I am reprinting my 2014 interview with Dennis. Here goes:

What’s the difference between the bands today and during the Manila Sound era?

One big, sad difference: The bands in the ’70s were getting airplay and heavy media exposure. People on TV and radio were enthusiastic with just about every new original song that came out. This, in turn, was unbeatable motivation for Pinoy musicians to churn out even more new songs.

Among all the legendary hits of Hotdog, which one is your fave?

Hands down, it would be “Manila” because of the effect the tune has on Filipinos, especially those far away from the Philippines. The first few bars alone trigger a “craving” to come back home. And that “effect” is a positive thing.

What’s your advice to aspiring musicians/songwriters?

Write from the heart. Expose your soul. Songs that endure are about true feelings, not just rhyming words stitched together. And never go with the trend: Songs that endear have a big idea … but a big idea is only big once.

The biggest setback in Original Pilipino Music is the total indifference of government to do anything about improving the situation. Nobody … yes, nobody … in government seems to care (or notice) that broadcast networks play more imported music than homegrown ones.

Officials will lamely say that there are rules in place (four OPM tunes per hour), but “rules in place” are no substitute for genuine desire and measurable initiatives to make sure that people like Up Dharma Down or Sinosikat? have a fighting chance against the One Directions of the world.

Filipino songwriting talent has not waned nor deteriorated.

What’s the creative process you go through when you compose a song?

Composing a song is a lot like love—you never know when it will come around and hit you like a nuclear bomb. I make sure I always have a pen (a Sharpie) and paper (even a receipt from my last meal at Milky Way) when an idea comes a-visiting on my mind.

No formula exists. A song manifests itself in strange ways. To illustrate: In the ’70s, while Rene and I were watching the Miss Universe contest on TV, I casually asked myself, how do ladies who aren’t Miss Universe material feel about this televised event?

And the answer became the lyrics to a song that Rene readily put a melody to. The result is “Ikaw ang Miss Universe ng Buhay Ko.”

What can you say about celebs who can’t really carry a tune but sell albums and have jam-packed concerts just because of hype?

Sorry, but I totally have no respect for people like those. It robs truly talented artists a chance to shine.

If you were to compose a song for corrupt politicians, how would some of the lines go?

What do you think of the singing contests on TV?

There should be less … [That’s] the best way to elev­ate the quality of the competition.

I would like to be remembered as the Filipino songwriter who wrote songs that endure … with topics that brought out the pride in being Pinoy.