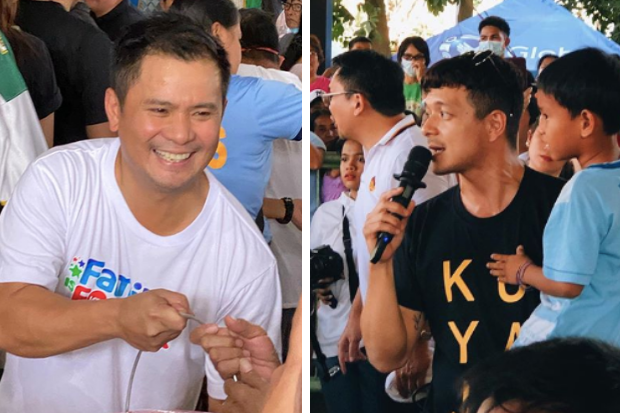 Amid the continuous efforts of volunteers, NGOs and the government to help the victims of Taal Volcano’s eruption, some celebrities are also taking action to provide what they can to the displaced families of Batangas.

While the country’s stars have joined different relief operations, from donating goods to rescuing abandoned animals, actors Jericho Rosales and Ogie Alcasid have decided to lend their hands by visiting and entertaining the victims.

Rosales expressed that he was grateful for being able to spend a day with the evacuees in Alitagtag and Bauan, Batangas, and gave fans snippets of the visit through Instagram yesterday, Jan. 22.

“Despite being overcrowded, the evacuations centers we visited were very organized thanks to the volunteers who selflessly share their time and energy for their kababayan (compatriots),” he noted.

“I felt pumped and energized to be with the kids. It’s nice to be able to share a positive message to them and good vibes in their temporary home,” he added.

The actor can be seen bonding with children evacuees in the series of photos. He was talking through a microphone in some shots, while he carried a kid on one arm in another.

“There’s a lot of work that needs to be done especially for long-term rehabilitation but this is a good start,” he said. “Prayers, thoughts and action are all needed.”

Rosales noted that people can keep supporting the victims as they recover by providing medicine, toilets and hygiene kits. He called for the public to drop their donations off at branches of supermarket chain Landers in the country.

He expressed his gratitude to the said company and restaurant chain Kuya J, which he is the ambassador of, for supporting the relief mission the actor was a part of.

Ogie Alcasid meanwhile gave fans a peek into the actor’s visit to an evacuation center in Tuy, Batangas.

“Just seeing them smile will melt your heart,” he said on Instagram last Tuesday, Jan. 21. “So much uncertainty was written on their faces when we arrived but the assurance that we will be there for them filled their hearts with hope.”

The evacuees were all smiles while Alcasid was in their presence. In one shot, Alcasid can be seen handing over a bucket of what appears to be relief goods to one evacuee.

The Provincial Disaster Risk Reduction and Management Office said over 32,000 families have been affected by Taal’s phreatic or steam-driven eruption on Jan. 12, including around 124,000 children as per data from child advocate group Save the Children.

Taal Volcano has not been emitting ash since yesterday morning, but Alert Level 4 remains placed over the volcano. The current alert level means that a hazardous explosive eruption is possible within hours to days, as per the Philippine Institute of Volcanology and Seismology yesterday. NVG