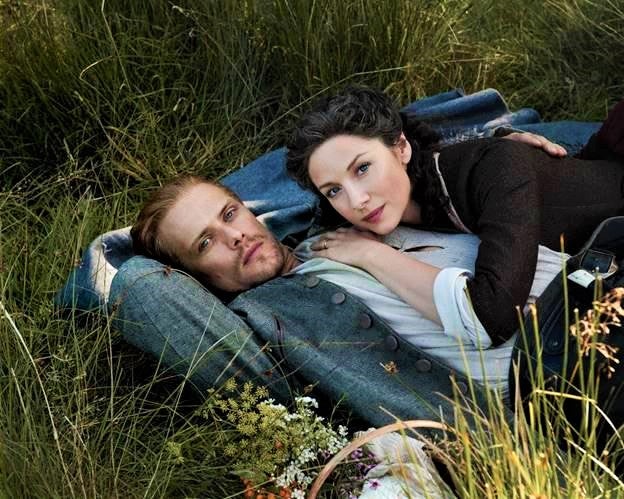 LOS ANGELES—“The first episode is going to be for the fans,” Sam Heughan said about Season 5 of his hit time-travel drama series, “Outlander,” where he and Caitriona Balfe play Jaime and Claire Fraser, respectively.

“It gives the fans a moment to enjoy spending time with the Frasers and the extended family,” added Sam, dapper in a navy Armani suit, complete with a pocket square, in this LA interview.

“The wedding episode gives them time to wallow in that. But of course, things go downhill pretty quickly, so they get a little breathing space before we get into the drama.”

Sam talked some more about the devoted fans of the series based on Diana Gabaldon’s book series. Season 5 is based on the fifth book, “The Fiery Cross.”

“The fans are definitely fervent and extremely excited,” the blue-eyed Scot said. “We have the premiere coming up next month and we’re going to be in Los Angeles.”

Looking boyish with his short blonde hair, Sam grinned as he dished about the wig his Jamie character wears. “I didn’t wear a wig on the first two seasons, or a season and a half. My hair was dyed. I eventually had so much dye that my hair went purple. So we wigged it, which has been great.

Speaking of age, Sam turns 40 in April this year. “Oh God, thanks for reminding me,” the heartthrob reacted with a laugh. “This season, Jamie hits 50. I think he’s looking quite good (laughs). But yeah, I have my 40th birthday in April, so I’m quite excited about it. I definitely feel like taking stock as you do every year.

“I am inspired by a lot of different people, but I’d like to emulate someone like Paul Newman or a sportsman I know. I feel very positive about it, and I’m sure Jamie does, too.” The Newman reference is not random—more about that toward the end.

The milestone reminded Sam of his younger years when he was trying his luck in Los Angeles. “Yesterday, I almost felt the ghost of myself going past. I was sitting in this car in a nice suit I didn’t pay for, and going off to do some press. I just felt very lucky.” 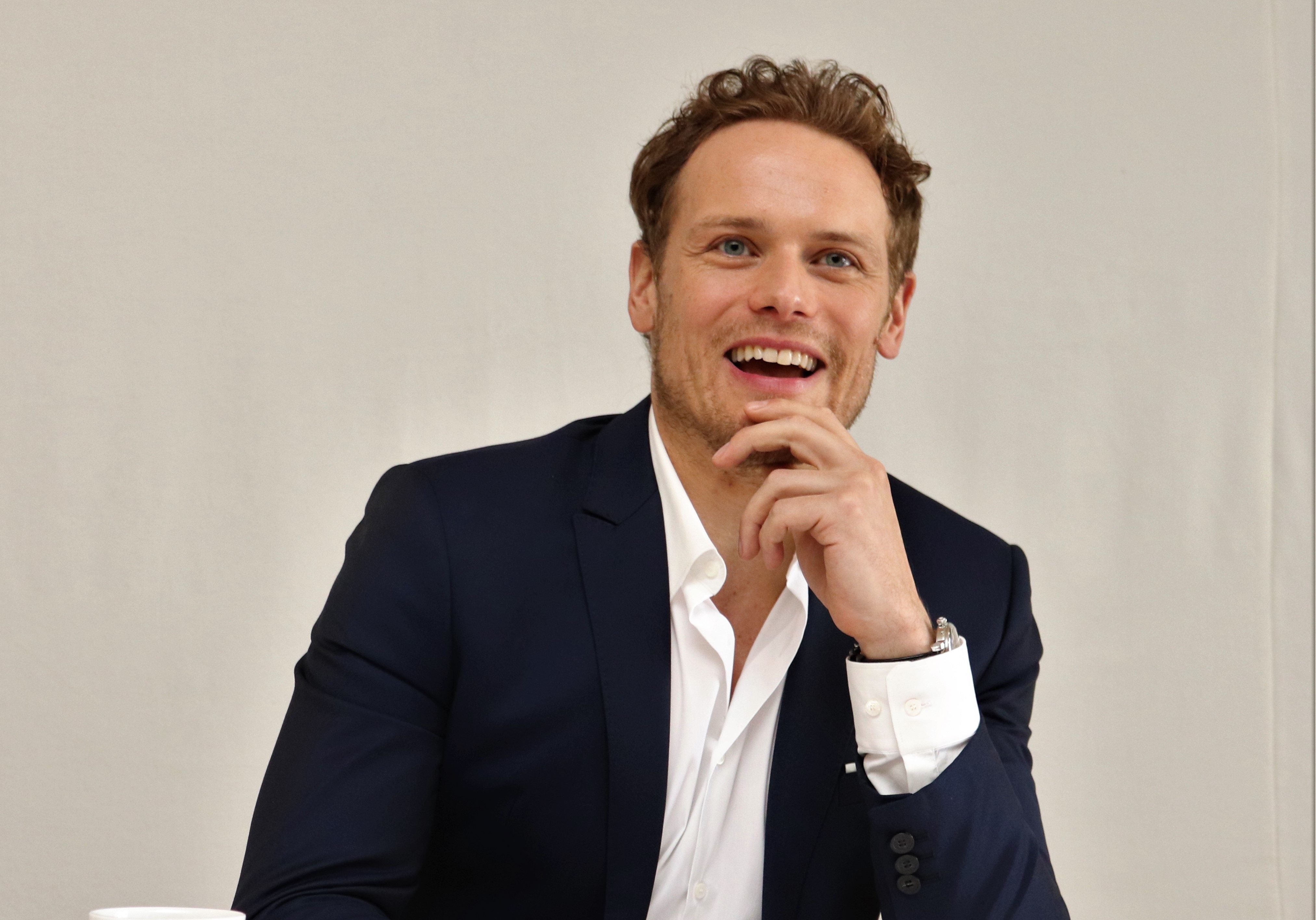 He also recalled, “When I graduated from drama school (Royal Conservatoire of Scotland), I was 23, 24. I was always going for the juvenile lead part and quickly found out that I was losing the jobs to younger, much better-looking lads.

“When you get to my age and beyond, the parts get better. It’s not the same for women and that’s a shame because it does feel that there’s some disparity there.”

For the fans of “Outlander,” one of the big “reveals” in the new season’s trailer is the sight of the Scottish Jamie wearing the red coat of—gasp—the British Army. “It’s a bit of a spoiler,” he admitted. “That is such a huge moment because of Jamie’s history and his past. That uniform stands for everything that he has fought against.”For Sam, Jamie’s evolution in the Starz series keeps him engaged. “The show is constantly changing. I’m not stuck playing the same character. He has all these great responsibilities now. He feels the weight of that.“I would like to emulate some of Jamie’s qualities. He’s very loyal and quite stubborn. The love that Jamie has for Claire—it would be amazing to find something like that myself.”

The actor, who started playing Jamie when he was in his early 30s, remarked on the long run of “Outlander.” “We never knew where we would get to in this. It’s amazing—we’re still here and there still seems to be a great appetite for it. The show has found a home on Starz but obviously, being on Netflix has helped, as well.

“This season, the pressure is much greater. And we know that the Revolutionary War of Independence is coming, so Jamie knows what’s at stake here. He knows he’s on the wrong side. But he’s doing it for the greater good.”

In the meantime, in Sam’s own life, having a relationship is tough. “Certainly, relationships are hard when you’re working in Scotland 10 months a year. I travel a lot and any downtime I have, I’m trying to do other projects, so very much, my career comes first. Maybe I will find someone eventually.

“My whole career, not just ‘Outlander’ but as an actor, I have always put that first. It’s hard when you travel a lot. My priority has been my career, so that’s where I am at the moment. But I am sure at some point, I will get knocked off my feet, then I’m screwed (laughs).”

On and off the set, Sam has found a friend in Caitriona, with whom he spends a lot of time working together. “Poor girl,” he cracked. 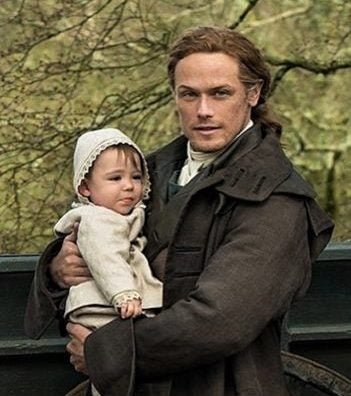 “She is such a wonderful woman—intelligent and creative,” he praised his costar who married music producer Anthony McGill in August last year. “More than anything, she’s a good friend. She forces me sometimes to socialize when I don’t want to. She’s a social animal. It’s wonderful to be part of, and always welcomed into, her world.

“I am quite relaxed sometimes. I let things go. She’s very strong and likes to get things done. That probably winds her up. I shouldn’t say it, but I know when she is pissed off (laughs). She does a little foot tap. So, if I see her tap her foot, I’m like, here we go. I can see it.”

“Outlander’s” popularity—and Sam’s rise—have led to many opportunities. Sam is now planning to be a producer, as well. “I have definitely been trying to find other projects to produce,” he announced.

“As an actor, you always want to do other things. This last year, I got to play characters that are very different from Jamie Fraser—‘Bloodshot’ being one of them that happens next month.”

“I wouldn’t say my character is the bad guy,” Sam said of his Jimmy Dalton part in the action-drama-fantasy, “Bloodshot,” which costars Vin Diesel and Guy Pearce. “But he’s certainly a very angry man. It’s a lot of fun to play that character.

“I was on wires flying through the air and fighting Vin Diesel (laughs). As an actor, those are the moments where you go, oh Christ, can I actually do this?”He added, “I did an independent action movie called ‘SAS: Red Notice,’ which is based on a series of books by a writer who’s also the most decorated British Special Forces soldier, Andy McNab.”

“My character is going to Paris to propose to his fiancée, and the Eurostar gets taken over by mercenaries,” he shared. “The movie sits between Jason Bourne and James Bond.

“Then, I did a couple of days on a movie (‘An Unquiet Life’) about Roald Dahl and Patricia Neal, where I got to play Paul Newman.” The film depicts the tumultuous marriage between the actress, Patricia, and the writer, Roald.

The Paul Newman? “Yes, big shoes to fill,” he replied with a smile. “I felt the responsibility of that. But the more I found out about Paul, the more I was in awe of him. What an incredible man.

“I’m not sure I look like Paul, but I tried to bring a lot of his mannerisms into the scenes. It’s a very small part in a bigger movie. It’s at the moment when he is meeting Patricia Neal and they’re about to go off and film ‘Hud.’

“I watched a lot of his movies, but for me, ‘The Hustler,’ which is my favorite of Paul Newman’s movies, is when he really begins to hit his strength.”

As Sam pursues film projects, he knows that he has at least one more season of “Outlanders.” Starz has renewed the show for a sixth season. Still, Sam wonders. “I do sometimes think, what am I going to do when it is over? I think I will actually be quite upset and sad, and it will be a great loss.

“I probably will always have Jamie Fraser with me at some point, even when the show is over.”