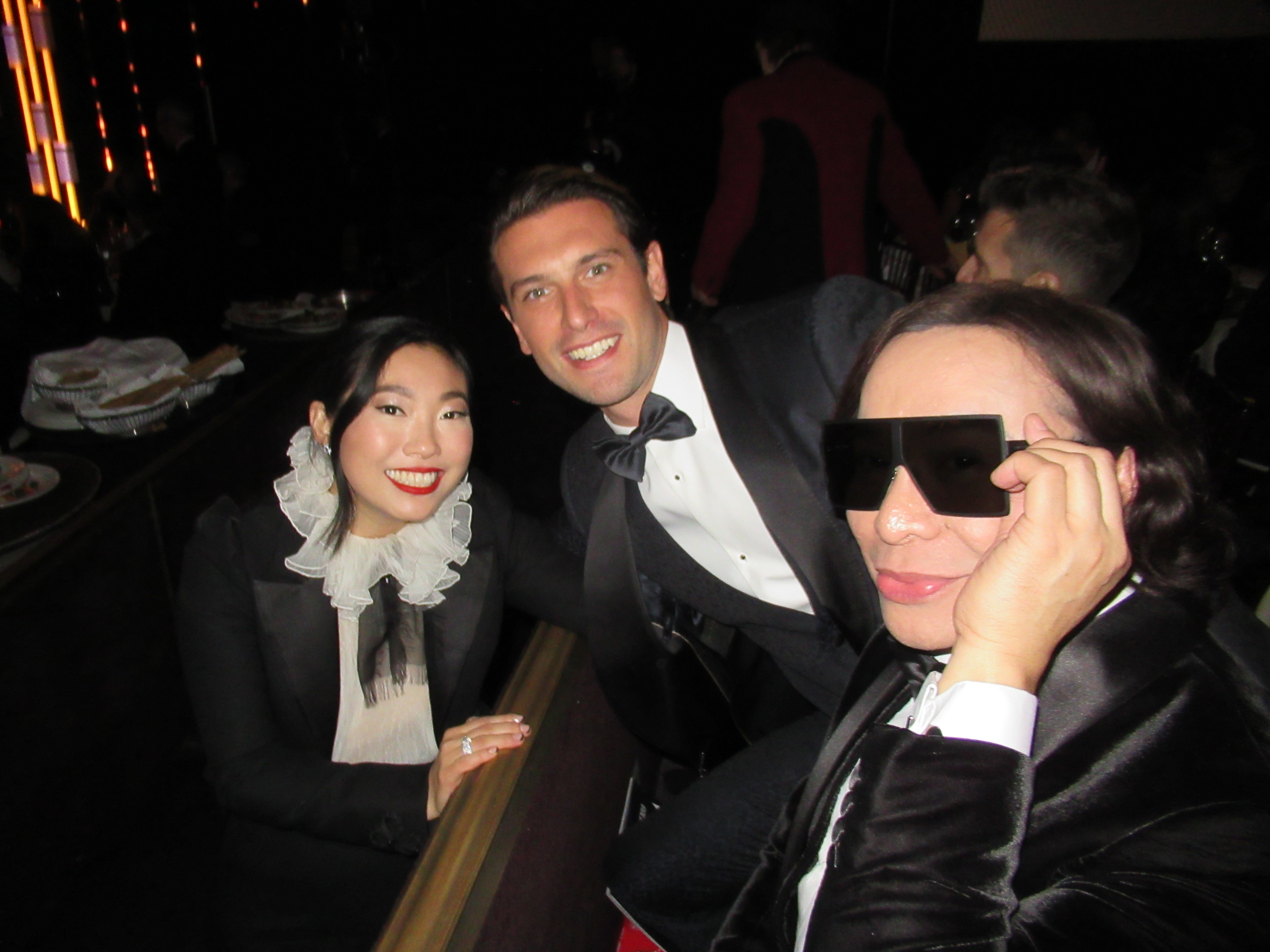 From left: Awkwafina, just minutes before her historic win, with Marcelo Olguin and Michael Cinco

Raymund, whose “Verdict” won a special jury prize in last year’s Venice Film Festival, is in Los Angeles as a participant in the 2020 Residency Program of the Hollywood Foreign Press Association, which votes on and presents the Golden Globes and holds the annual symposium attended by the directors of the five best foreign language nominees.

The protégé of Brillante Ma Mendoza said about Saturday’s panel discussion with Bong Joon-ho, whose “Parasite” would go on to win the Globes’ foreign language film prize last Sunday night; Pedro Almodovar (“Pain and Glory”), Ladj Ly (“Les Miserables”); Celine Sciamma (“Portrait of a Lady on Fire”); and Lulu Wang (“The Farewell”): “It was a thought-provoking experience, especially hearing the struggles that other foreign filmmakers, such as Lulu Wang, Bong Joon-ho and Pedro Almodovar, experienced.”

Gutierrez, in a tux on the Globes’ red carpet, is one of six selected filmmakers from around the world (the others are from Ukraine, Spain, Chile, Canada and Australia) who are participating in an intensive filmmaking program in the next three weeks. 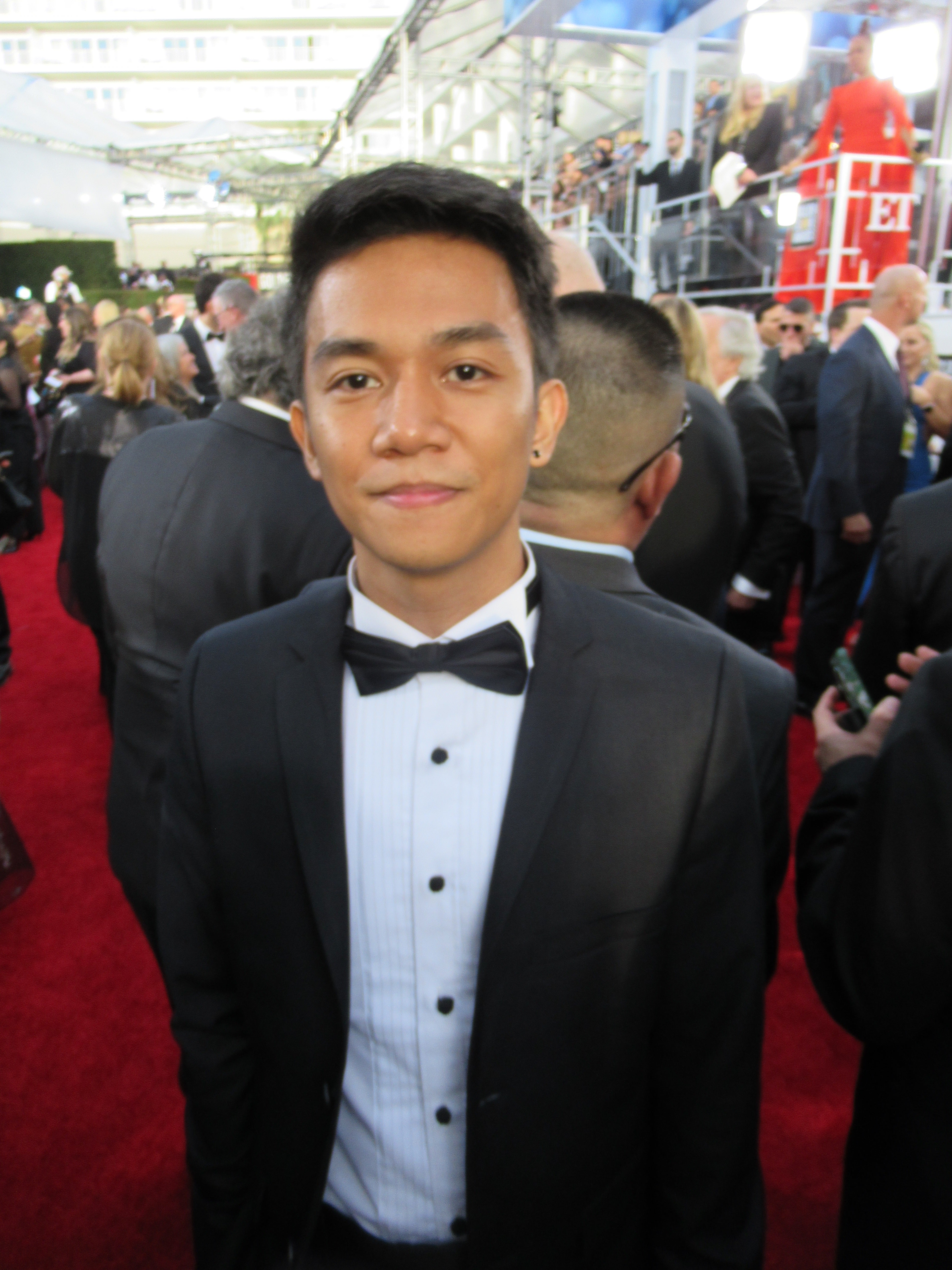 The young director’s “Verdict,” which is the Philippines’ entry in the Oscars this year, and the films of his fellow participants, will be screened by Film Independent, a nonprofit arts organization that champions the independent filmmaker.

At Amazon Studios’ Golden Globe after-party at Stardust, atop The Beverly Hilton where Hollywood’s party of the year is held annually, Raymund met fellow Filipino guests.

Other Pinoy guests who were fascinated to meet the very young Pinoy filmmaker (he’s only 26) included Lisa Manibog Lew, the Emmy-winning producer who was a former Miss Philippines International; Bessie Badilla, who was Balenciaga’s house model and starred in the popular TV sitcom, “Eh Kasi, Babae”; and iSkin entrepreneurs Richard and Imee Maghanoy. Isa Briones costars in the newseries “Star Trek: Picard,” which premieres this year

Also in Amazon Studios’ bash was Isa Briones, the daughter of Jon Jon Briones and Megan Briones who is poised to break out this year as a costar in Patrick Stewart’s new series, “Star Trek: Picard.”

We bumped into Isa’s parents at Netflix’s affair, one of seven Golden Globe after-parties simultaneously held in The Beverly Hilton complex.
NBCUniversal held its shindig at nearby Waldorf Astoria. Jon Jon and Megan were hanging out with fellow actor, Rodney To.

In Warner Brothers and InStyle’s after-party, “Orange Is the New Black” actress Laverne Cox rocked in a, well, orange gown by Michael who described it as “a very intricate gown with meticulous details of shirred tulle to create the electric pleats effect.”

During the show inside the International Ballroom, Michael sat across Sofia Vergara, who wore his sequined black mermaid gown in the 2013 Globes. Everywhere we went during Golden Globes week, including at the preparties, people loved Michael’s signature look with the big dark sunglasses.

One guest coming out of the elevator at the Hilton just immediately took a photo of the shy Samar-born designer. 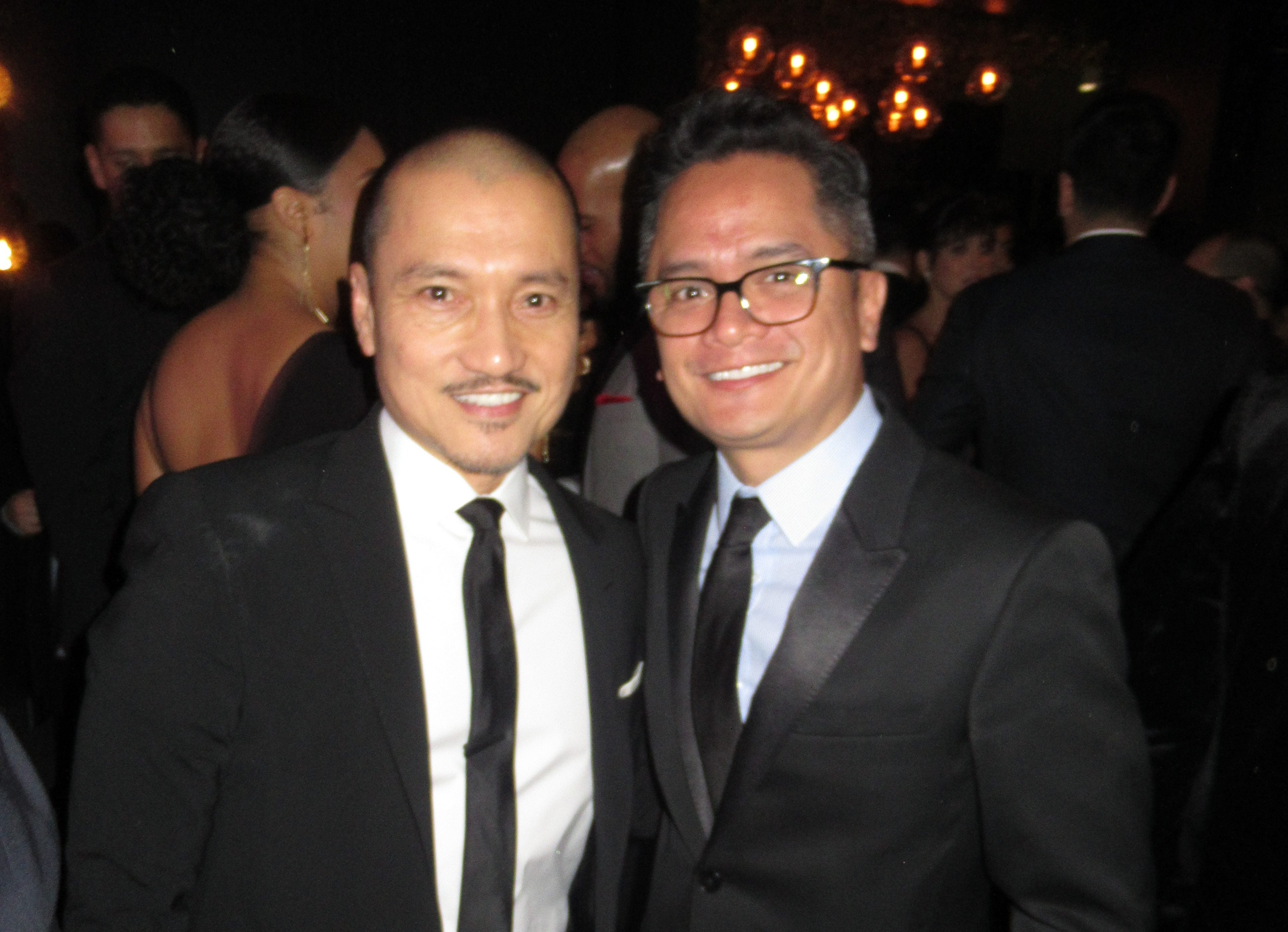 San Diego-based Kenneth Barlis, in his own blue velvet modern take of the suit, also had his share of fashion admirers.

It was a wonderful blur of a weekend. Back to the show in the ballroom, Awkwafina stopped by during a commercial break for a quick hello to our table and met Michael and his guest, Argentinian actor-model Marcelo Olguin.

We wished Awkwafina good luck and by coincidence, she went on to win best actress in a motion picture–comedy or musical for “The Farewell.” We were elated that the rapper-turned-actress made history as the first Asian to win in a film lead actress category.

On the star-studded red carpet, we remember being very careful not to step on the long white train of the gown of nominee Jennifer Lopez as she and her fiancé Alex Rodriguez walked hand in hand.

Watching the red carpet fashion parade in the bleachers were two Pinoys, Singapore-based Mike Tuquib and Julianne Lozada, who flew all the way from Asia. A special shoutout to Mike, who said he is a long-time reader of this column. Thank you, Mike! 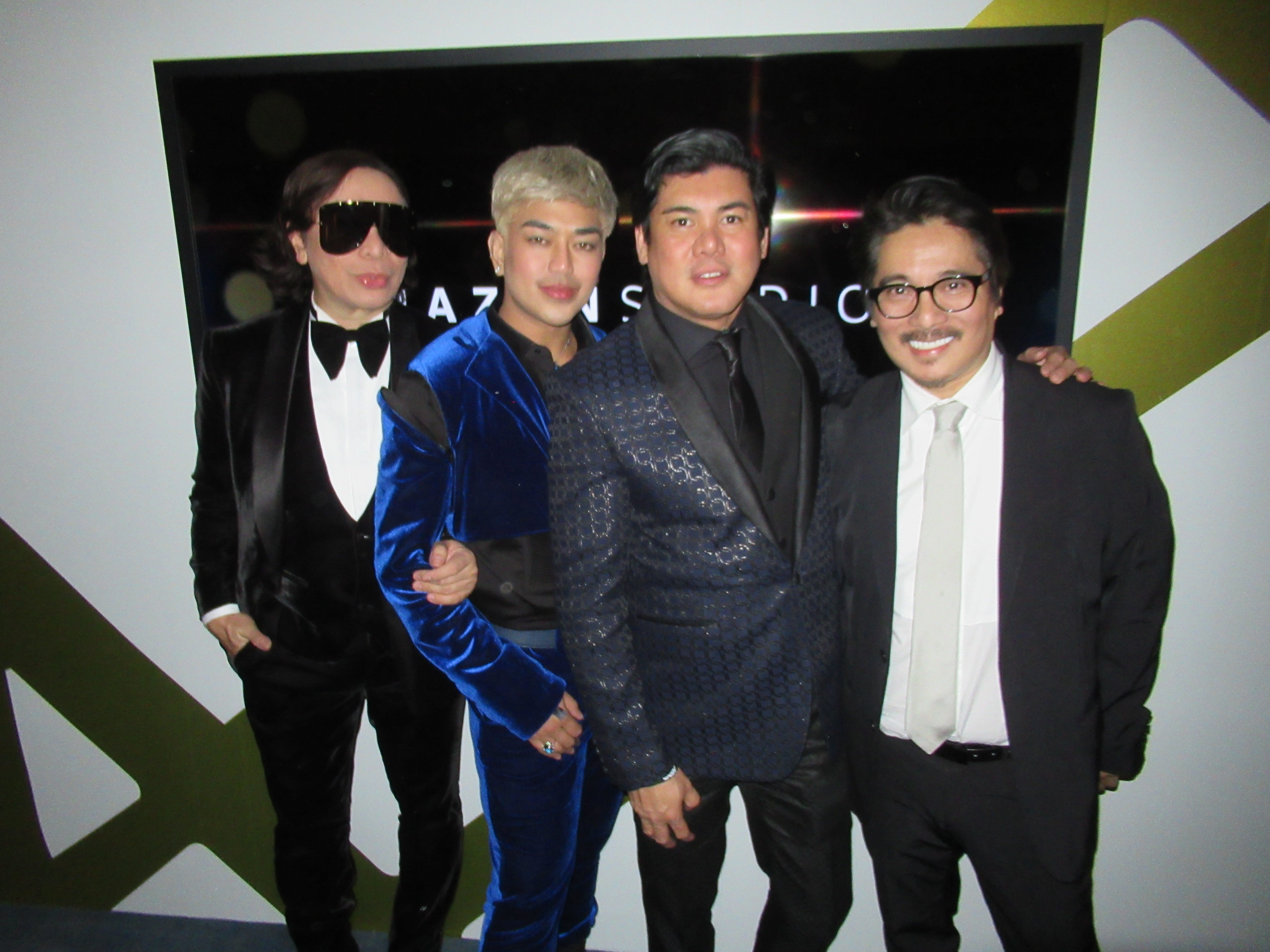 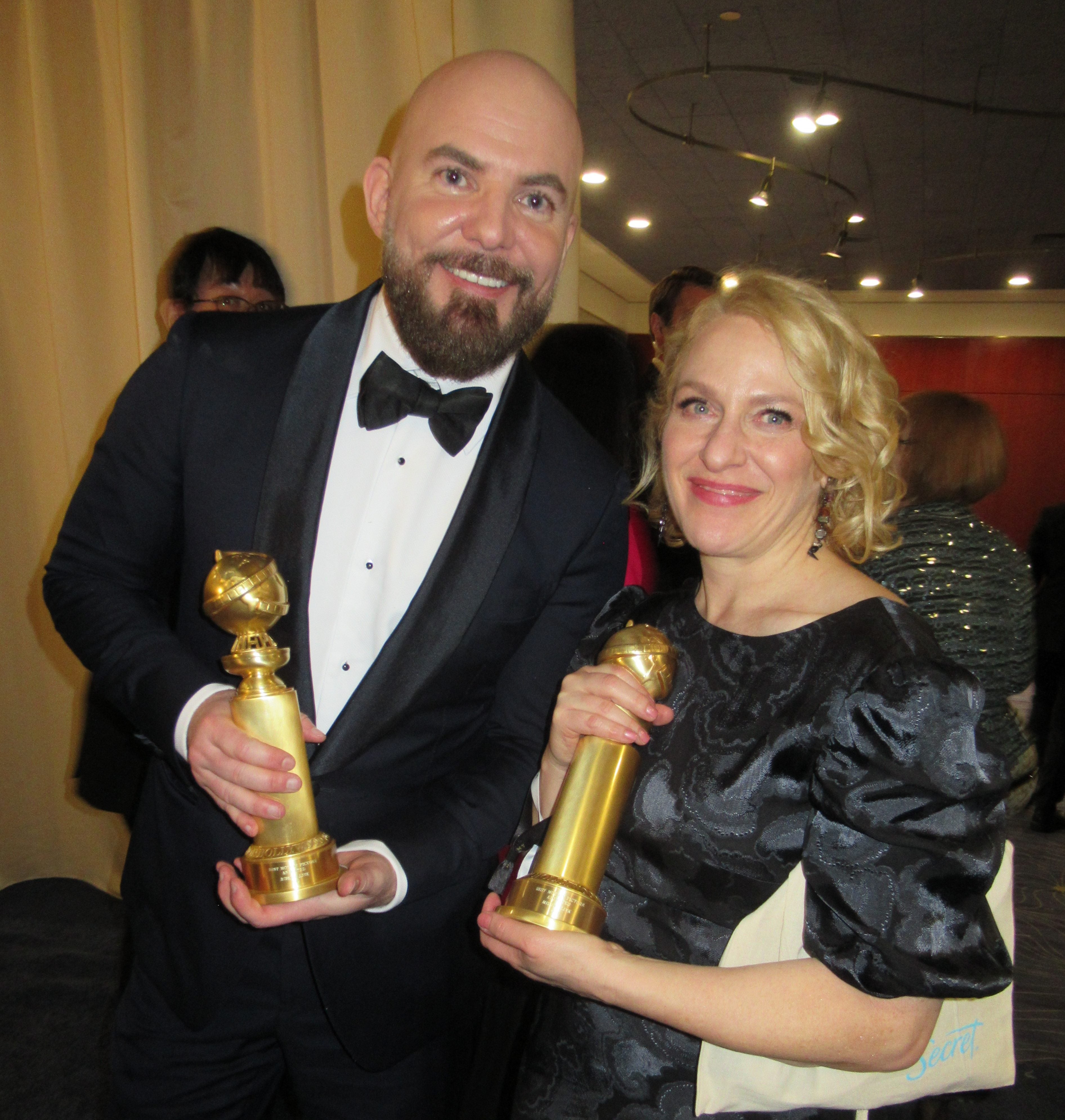