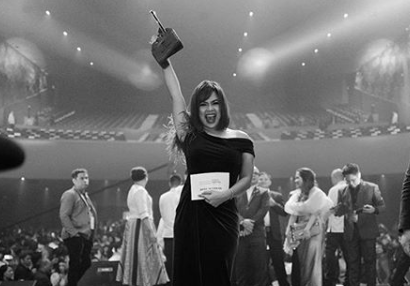 Despite their wins, however, only 38 cinemas nationwide are showing “Mindanao” as of yesterday, Dec. 28, which prompted Santos and the team to appeal for more screenings.

During her acceptance speech, Santos joked about combining her and co-star Allen Dizon’s cash prizes (P100,000 each) so that the film can at least make profit.

While Santos won for her portrayal of Saima, Dizon bagged the Best Actor Award for his role as Malang, Saima’s husband in the film. The whole “Mindanao” team claimed their awards during the 45th MMFF Gabi ng Parangal last Friday, Dec. 27.

“Bilang konti lang po ang sinehan namin, pakidamihan naman po, pakisabi na lang (As we only have a few cinemas [featuring “Mindanao”], can you please tell them to add some more),” Santos said in a speech for “Mindanao” winning Best Picture.

(Our only wish is for more cinemas to feature our film tomorrow. And I hope that with this award, people will continue watching ‘Mindanao’. We did this for all of you.)

Despite the challenge “Mindanao” is facing, Santos remains grateful for the people behind the movie, saying their recognition is “such a wonderful end to my 2019.”

(Thank you very much to the MMFF, the MMDA [Metro Manila Development Authority] and the cast and crew behind “Mindanao”. Direk Brillante, thank you so much for sharing your talent with me. I will treasure this forever. This is an experience I will never get tired of telling over and over again.)

Santos also expressed her gratitude through Instagram yesterday and congratulated “Mindanao” for bagging 11 awards from this year’s MMFF.

“Wooohhh!!! Lord! Grabe ka sa akin this year (You have given me so much this year)! I am beyond grateful!” she said.

“Mindanao” tells the story of a Muslim mother taking care of her cancer-stricken daughter in a temporary home for children in Davao while her husband, a soldier, is away fighting rebels in Maguindanao.