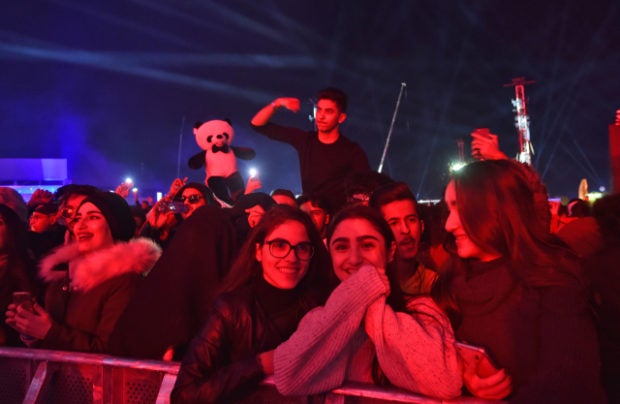 Tens of thousands of Saudis have flocked to an electronic music festival billed by organizers as the biggest in the ultra-conservative kingdom since it began easing decades-old restrictions on entertainment.

Dutch DJ Tiesto, South Africa’s Black Coffee and France’s David Guetta are among the top acts at the three-day MDL Beast festival, which began near Riyadh on Thursday.

“This is the biggest music festival in the region,” said DJ Cosmicat, one of a few female Saudi artists performing at the event.

“The whole country is going through a huge change,” she said in a statement released by the organizers.

Young Saudi revelers held their mobile phones aloft in front of one of the stages as lasers and spotlights lit the evening sky on Thursday. Many of the women went without the hijab headscarf — not a legal requirement but widely worn in the conservative Muslim country.

The multi-stage festival attracted 130,000 fans on its first day, said organizers, calling it the “largest music, arts and culture festival Saudi Arabia has ever seen.”

He has scrapped decades-old bans on cinemas and women drivers while allowing gender-mixed concerts and sports tournaments. The relaxed social norms have been welcomed by many Saudis, two-thirds of whom are under 30.

But introducing such facilities at home has fueled controversy in a deeply conservative society. And alongside sweeping social reforms, the kingdom has carried out a crackdown on dissent.

Nearly a dozen women activists were arrested for demanding the right to drive, just weeks before the kingdom lifted the ban on female motorists last year.

The kingdom has also faced intense international scrutiny over its human rights record since last year’s killing of Saudi journalist Jamal Khashoggi at the country’s consulate in Istanbul.

In July, American rapper Nicki Minaj pulled out of a concert in Saudi Arabia in what she described as a show of support for women’s and gay rights in the kingdom. RGA