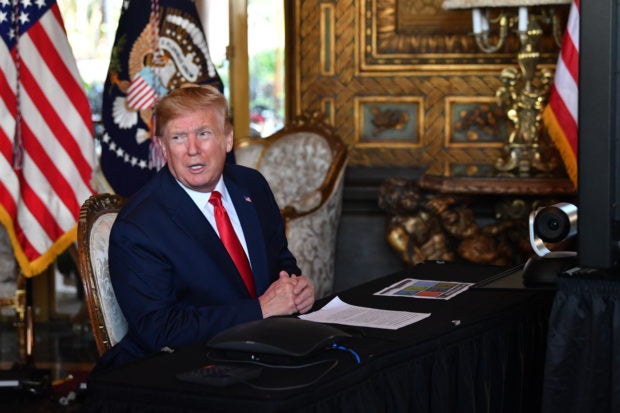 Long before taking up residence in the White House, Donald Trump appeared in “Home Alone 2” — a turn on the big screen he described as an “honor.”

Trump spoke with deployed members of the military on Tuesday, and one asked him about his appearance in the Christmas film.

“I was a little bit younger, to put it mildly… It turned out to be a very big hit, obviously. It’s a big Christmas hit, one of the biggest,” said Trump, who had just acquired the Plaza Hotel in New York, where several scenes for the 1992 film were shot.

“It’s an honor to be involved in something like that,” said the president, who appeared briefly in the movie.

In the film, little Kevin — played by Macaulay Culkin and again separated from his parents — struggles to find his way through the gilded hotel.

He stops a man in a long black overcoat and red tie to ask him for directions to the lobby.

“Down the hall and to the left,” replies Trump.

Actor Matt Damon claimed in a 2017 interview with The Hollywood Reporter that the businessman would allow films to be shot in his buildings as long as he received a part.

Trump is thus — most of the time playing himself — in the credits of some 20 films and series, including “Zoolander” and “Sex and the City”. RGA

Trump lashes out as impeachment trial stuck in limbo

Read Next
WATCH: Sandara Park covers Meteor Garden’s ‘Ni Yao De Ai’
EDITORS' PICK
vivo brings to the Philippines a powerful smartphone with a slimmer body, the vivo Y02s for only PHP 6,499
Apple warns of flaw that lets hackers into iPhones, Macs
46% of schools nationwide to have full face-to-face classes on Aug. 22
House energy committee chair Arroyo bats for cheap electricity
What to watch out for when selecting a video surveillance solution
Heads may roll at BOC, says Palace if sugar smugglers are allowed to use recycled import permits
MOST READ
DepEd to give teachers P5K cash allowance within first week of classes
LOOK: Miel Pangilinan dazzles in glittery pre-debut shoot
DOJ indicts bank officer in $2.1 billion Wirecard fiasco
PH importing sugar after all: Marcos okays 150,000 MT
Don't miss out on the latest news and information.