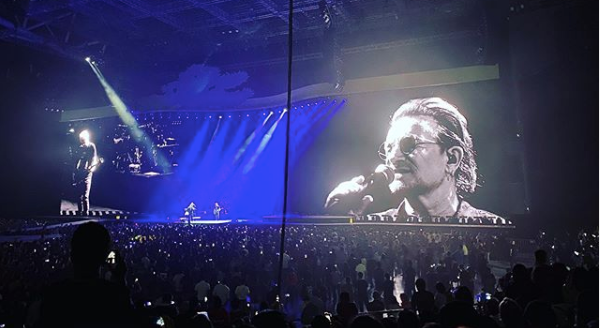 The stage in U2’s first-ever concert in Manila as seen from couple Ogie Alcasid’s and Regine Velasquez’s seats  (Image: Instagram.com/@ogiealcasid)

Several local celebrities were spotted in U2’s first-ever concert in the country, and only rightfully so—because when it comes to the Irish rock and roll legends, aren’t we all fans?

Couple Ogie Alcasid and Regine Velasquez, both music legends in their own right, gave their fans snippets of last night’s rockathon through their Instagram accounts.

Alcasid kept followers updated on their concert-going adventure, and announced when he and Velasquez arrived at the Philippine Arena yesterday, Dec. 11.

In another photo, the couple can be seen eagerly waiting for the concert to start while on their seats. While Alcasid smiled for the camera, Velasquez seemingly chose to make a sleepy face instead, as seen on his post.

The singer also gave fans the chance to see the concert as seen from their seats.

Alcasid also captured on video the moment U2 drummer Larry Mullen Jr. faced the camera and gave the crowd a peace sign through a large screen backdrop.

“In the name of love [heart emoji] I love this song it’s the only one I know,” Velasquez said. Alcasid can be seen dancing to the beat of U2 performing their song “Pride (In the Name of Love).”

Velasquez also managed to snap a few seconds of U2’s classic rock anthem, “With or Without You.”

“’When Women of the world unite to rewrite “history” as “HER”story, then It’s A Beautiful Day’ – Bono (Humanitarian, rockstar, @u2 frontman),” Locsin quoted Bono on her Instagram post at midnight of Dec. 12.

“When Women of the world unite to rewrite “history” as “HER”story, then It’s A Beautiful Day”. – Bono (Humanitarian, rockstar, @u2 frontman) – 01211190, Manila, Philippines #JoshuaTreeManila #U2 #Bono #Rock #Band #Humanitarian #WomenEmpowerment

Locsin first met Bono during a Philippine Red Cross event held the day before the concert, where the latter introduced a drone-based medical delivery company Zipline to the country.

Singer-songwriter Rico Blanco, an avid U2 fan, tagged along with Sandwich frontman Raimund Marasigan for the concert, as seen on the former’s Instagram stories. 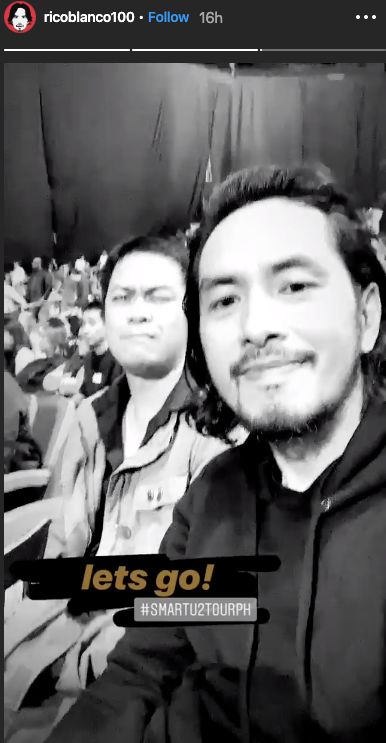 Rico Blanco and Raimund Marasigan at the Philippine Arena for the U2 concert as seen on Blanco’s Instagram stories. Image: Instagram.com/ricblanco100

Mr. Pure Energy Gary Valenciano,  meanwhile, praised the Irish rock band giving “one of the most outstanding concerts,” and even captured several clips of the event.

“One concert I’m truly glad I got to see. Thank you U2!!!! It was one outstanding event!!!!,” Valenciano said in an Instagram post yesterday.

He also gave fans his personal favorites in last night’s performances by U2. “Just some clips from what I can consider as one of the most outstanding concerts I’ve witnessed. Total respect for U2!!!” he said.

U2’s concert at the Philippine Arena in Bulacan is part of their 2019 edition of their tour celebrating the 30th anniversary of their album “The Joshua Tree.”  /ra

U2 pays homage to Filipino women in first PH concert