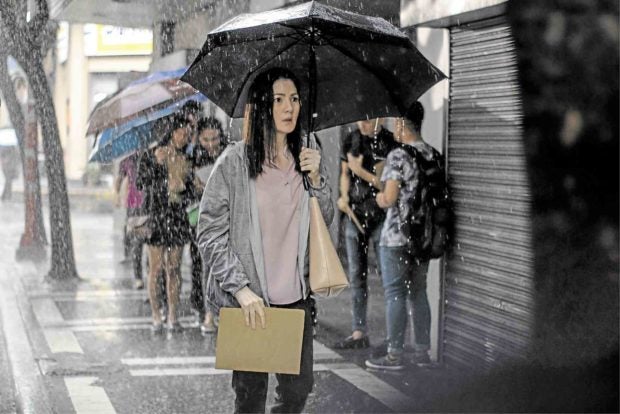 “I’m not the kind to wish misfortune on other people for my personal gain,” Carmina Villaroel said when asked how she reacted to her upcoming horror film, “Sunod,” making it into this year’s Metro Manila Film Festival (MMFF) after “Kampon,” Kris Aquino’s planned entry, was disqualified.

Carmina is happy, of course, to take part in the event for the first time in 29 years. But she wasn’t exactly jumping for joy, either. “Kris is my godmother. And we were already texting each other before everything happened… I congratulated her when I found out that her movie got in. I also got in touch with her when it got disqualified,” she related.

“Kampon” was dropped by the MMFF committee from its roster of entries after people behind the movie filed a request for change for its lead actor—from Derek Ramsay to Gabby Concepcion—beyond the July 30 deadline.

“We were also talking before our movie was selected as replacement. Kris told me she was praying that we get her slot. And nagdilang anghel siya,” Carmina said. “I’m sad for her, but there’s always a next time.”

And despite the fact that her movie wasn’t part of the original selection, Carmina isn’t bothered in the least.

“I’m thankful every time a project comes my way, and it doesn’t matter whether we’re the first or second choice—it’s never an issue for me. The important thing is that the role was offered to me,” she said.

Produced by Ten17P and directed by Carlo Ledesma, “Sunod” follows the story of Olivia (Carmina), a single mother who accepts a high paying but taxing position at a call center, so she could afford medical care for her sick daughter. But before long, weird and spooky things start happening in her new office in an old building in Manila.

“This isn’t a jump-scare horror or a scream fest. It’s a horror-drama and it’s quiet and disquieting… and quite atmospheric,” said Carmina, who admitted that she has had her fair share of eerie encounters in the past.

“I used to feel (supernatural) presence when I was younger, when I didn’t have kids yet. I don’t know why, but I had a lot of spooky experiences then. Perhaps because I was more vulnerable back then; I had lot of problems. Curiously, those went away when I had a family.”

The last time Carmina had an MMFF entry was back in 1990, when she appeared in the “Kulam” episode of “Shake, Rattle &amp; Roll II.” “Oh my God, I feel so old!” she quipped, laughing. “And it so happens that I’m back with another horror.”

Not only is this the 44-year-old’s first MMFF movie in a long while, it’s her first starring role in a film in a long while, period. “A lot of my recent movie work were limited to guest appearances,” she said.

But it’s not like she’s not getting any offers. “It’s just that there hasn’t been anything that sparked something in me—they weren’t the right fit. That’s why I’m always on television,” she said. “Honestly, I was envious of other actors doing films, because I had yearning to return to the big screen.”

Carmina finally got her wish—and for an important show biz event at that. How does she feel about going up against films with MMFF heavyweights as lead stars? “I admit that there’s pressure—super! But I don’t want to compete with them. I don’t want the added stress and pressure,” she said. “I just want to enjoy the experience, have fun.”

Besides, topping the box-office rankings isn’t the main goal. “I know we’re up against giants. I’m just praying people could give our film a chance,” she said.